‘Game of Thrones’: Every Possible Way to Kill an Ice Dragon

In the sixth episode of Game of Thrones Season 7, “Beyond the Wall,” the Night King successfully felled one of Daenerys’ dragons, Viserion. Then, he brought it back to (undead) life before our very eyes. In the Season 7 finale, the newly formed undead weapon destroyed the Wall that’s long-protected Westeros by raining down icy fire.

We don’t know for sure that Viserion is definitely an ice dragon, a creature thought up by A Song of Ice and Fire author George R. R. Martin. But we do know that the undead Viserion is about as close as we’ll likely get to one in HBO’s adaptation of his work.

Martin’s characters reference the deadly beasts in both the Ice and Fire book series and in a children’s novel he wrote called The Ice Dragon. We know, from that text, that ice dragons “breathe cold, a chill so terrible that it can freeze a man solid in half a heartbeat.” And we’ve already seen just how dangerous that breath can be.

A weapon with that much power is obviously a game-changer in the war for Westeros. So we can’t help but wonder exactly how Jon Snow, Daenerys Targaryen and the rest of Game of Thrones’ heroes might be able to stop it from raining frozen fire upon the Seven Kingdoms. Here, in no particular order, are our best guesses for how to kill an ice dragon.

Daenerys was clearly devastated when Viserion perished right in front of her eyes. She didn’t just lose a weapon, after all — she lost a child. But though she will undoubtedly grieve, she still has a kingdom to win, as well as two more children, Drogon and Rhaegar.

And Viserion’s siblings may be part of the key to taking the newly reborn ice dragon down. The fantastical creatures that inhabit Westeros are varied, and some — like the giants — are pretty big. But what better way to take down a dragon than with, well, another dragon, or better yet, even two?

Of course, that would leave Drogon and Rhaegar with the terrible task of killing their brother (again). And that may not be something Daenerys would ask them to do. Game of Thrones does love to maximize its drama though, and a battle between the three biggest beasts in the Seven Kingdoms would certainly be that.

There’s at least one big question that still remains about the ice dragon: is he a wight, a White Walker, or something else entirely? If Game of Thrones’ newest un-dead weapon does have wight-like qualities, there could be a relatively simple solution to bringing him down.

We know that fire can kill wights. That’s why Jon and his friends were able to take down so many of them with the help of some flaming swords in “Beyond the Wall.”

Of course, even if the mode of killing the ice dragon is simple, the method may prove to be difficult. It would take a great deal of fire — and an already prone creature — to really guarantee a fatal amount of damage. Plus, the glimpse we got of Viserion in his newly revived form revealed a distinctly White Walker-esque blue eye. That could easily mean that he will be much more difficult to destroy.

Fire isn’t the only element that can kill wights. We learned in Season 7 that they can’t swim, so that means they can drown. That means that if the ice dragon has any wight-like qualities, it could also have an aversion to water.

But saying you’re going to drown an undead dragon and actually accomplishing that feat are two entirely different matters. Since Viserion is so enormous, it would take a lot of effort to drag him below the water. Luckily, Daenerys and Jon have a pretty big army between the two of them.

When Jon, Daenerys and their allies find out they’re dealing with an ice dragon, they’re going to make it a priority to kill it. But if they think outside the box and focus on what they know about how White Walkers are created, they may realize there’s another solution.

We learned in “Beyond the Wall” that when you kill a White Walker, you can also rid the world of all of the undead minions it created. So, in theory, if they can eliminate the Night King, there’s a chance that it will also make Viserion, the ice dragon, disappear.

But as Jon knows all too well, killing the leader of the army of the dead is definitely easier said than done.

Daenerys allows Jon to mine the Dragonglass. | HBO

There’s a reason that Jon traveled all the way to Dragonstone to meet with Daenerys — and it wasn’t to bend the knee. It was to ask for permission to mine the dragonglass that he knew was buried within the island. He knew it’s one of the only sure-fire ways to kill White Walkers.

Regular blades are no help when it comes to defeating the Night King and his soldiers — they disintegrate on contact without leaving so much as a mark. But dragonglass can pierce through their icy skin. So, it stands to reason that the forces fighting against the ice dragon could use the same material to take it down too. That is, if they can devise a dragonglass weapon big enough to make a dent. 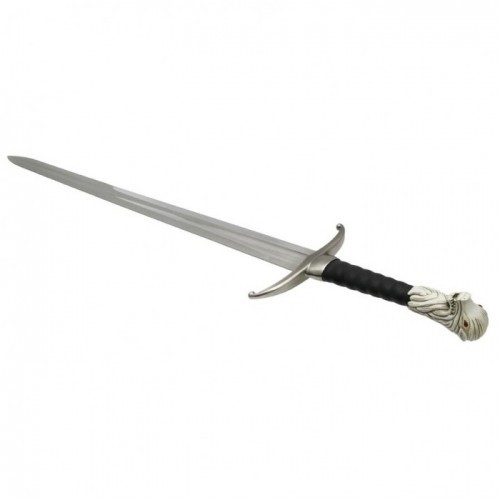 When Jon Snow slayed a White Walker with Longclaw, the Valyrian sword that once belonged to Jeor Mormont, it was a bit of a surprise. That’s because not many characters in Game of Thrones were aware that Valyrian steel could kill the undead.

It’s welcome information, of course — especially now that they’re going to be facing down an ice dragon. But, like with dragonglass, there’s the problem of creating a Valyrian weapon big enough to inflict any real damage on a creature that large. And it doesn’t help that there are so few known weapons made of the rare material to begin with.

Cersei burned the Sept of Baelor with wildfire. | HBO

On Game of Thrones, there are few weapons that can exact more widespread damage than wildfire. It’s so dangerous and so deadly that it’s been used only twice in seven seasons.

There are some serious downsides to using wildfire. It’s basically Westeros’ version of a nuclear weapon, and there’s no way of controlling its collateral damage. And while there’s no guarantee it would kill an ice dragon, so far there’s not much it hasn’t destroyed.

Cersei Lannister has already proven that she’s not above using wildfire to keep her enemies at bay. So if she ends up fully immersed in the battle against the Night King, she may prove to have an invaluable weapon.