The rise of internet communities acting as companions to popular franchises has spawned a culture of fan theories in its wake. Whenever you gather a bunch of like-minded movie and TV-watchers in one place together, their collective brainpower has a tendency to suss out even the deepest of mysteries. Weeks before Star Wars: The Force Awakens hit theaters, one Redditor even guessed at a large portion of the main story, having pieced together theories and evidence from various corners of the web. It’s within the Game of Thrones fandom though where we see the best and craziest iteration of this culture.

Fans of both George R.R. Martin’s original novels and the HBO series are some of the most astute and observant in all of geekdom. Years before Jon Snow’s Targaryen lineage was revealed in Season 6, there was already a theory known popularly as “R+L=J,” correctly citing Rhaegar Targaryen and Lyanna Stark as Jon’s actual parents. Even that’s just the tip of the iceberg, so let’s look at some of the more prevalent theories leading into the final seasons of Game of Thrones.

1. Varys has been pulling the strings since the beginning 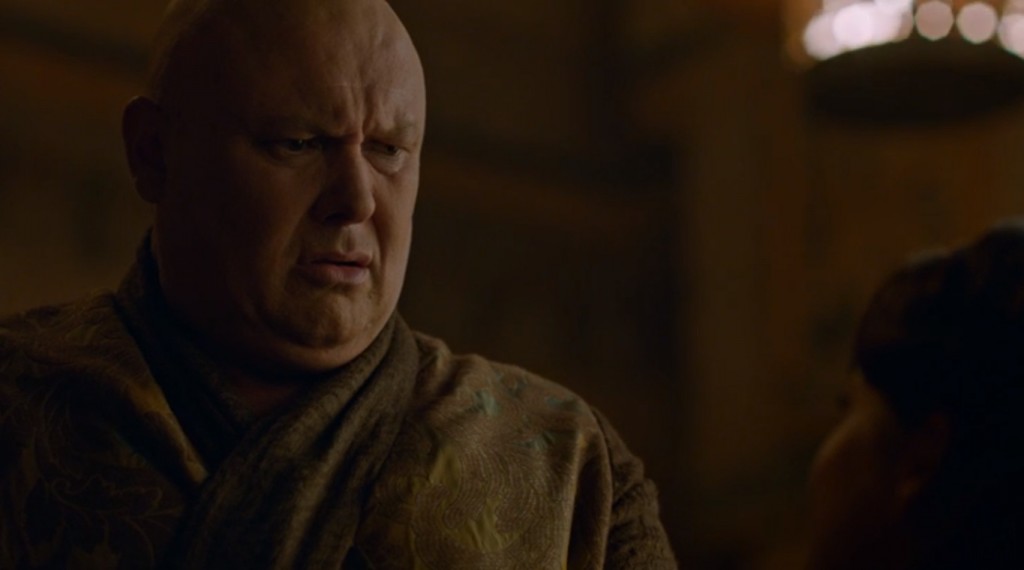 This particular theory (of course) comes from another clever Redditor, pointing toward the former Master of Whispers as the true puppet-master of Westeros. According to Reddit user /u/gmnitsua, “Varys is playing the best game out of anyone. He conspired with Illyrio to get Daenerys married to Khal Drogo. Varys conspired with him to get her dragon eggs. Varys conspired with Jorah from the beginning.” He goes from there to describe how Varys orchestrated for Tyrion to lose his trial back in Season 4, as a way of pushing him toward Essos as an advisor to Daenerys. To round it all out, he closes with an apt observation: “You aren’t actually the king if you’re just playing a game of chess.”

2. Game of Thrones is a story being told by Sam 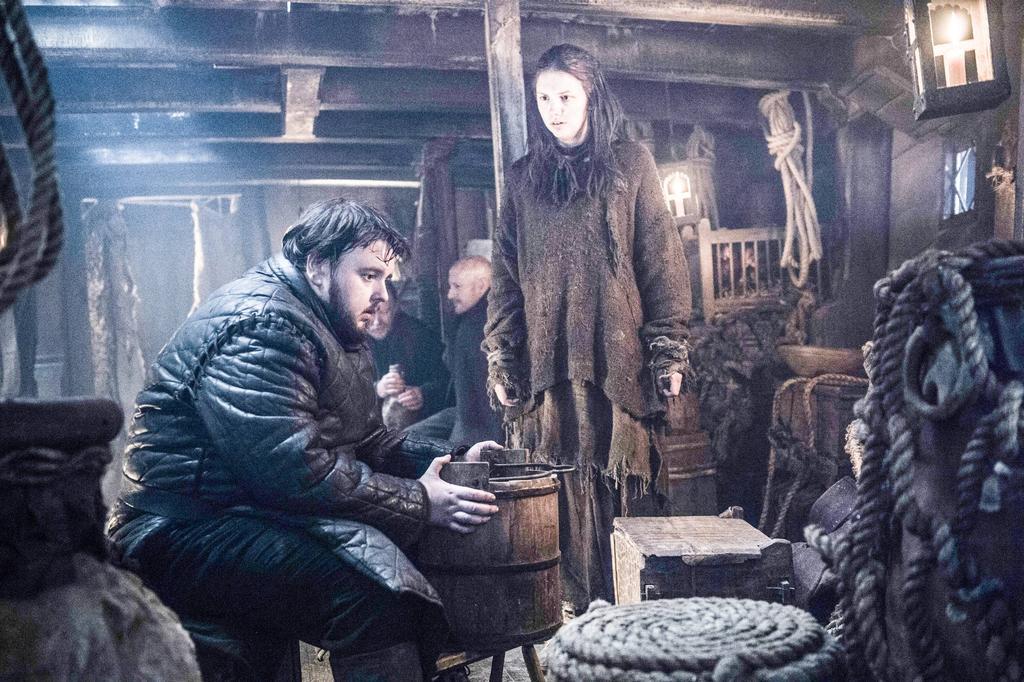 Sam in Season 6 of Game of Thrones | HBO

This one comes straight from a Game of Thrones actor, posited by John Bradley, who’s played Samwell Tarly since Season 1 of the show. In an interview with The Hollywood Reporter, Bradley notes that the presence of the gyroscopes from the GoT intro in the library of the maesters is far from a coincidence.

I think it could mean any number of things. One theory is that what we’re seeing now and how we’re experiencing Game of Thrones is Sam telling the story of Game of Thrones. If you take the logic of the story now, the story of Westeros and the story of the battle for the Iron Throne, it would be a book in that library. The visual motif of that is you’re about to be told a story — the sense of an idea of being told a story, and people gaining that knowledge, the way Sam is absorbing knowledge in the library.

This carries a handful of implications for the Game of Thrones endgame. First off, the story would carry a distinct bias based on what Sam heard and saw himself. Second, it would be generally biased toward Jon, Sam’s best friend and closet confidante. And finally, it could hint at one of two outcomes: Sam telling it to a group gathered around a campfire in the aftermath of a White Walker takeover, or to a classroom in Old Town years following a happy ending.

3. The “Prince That Was Promised” 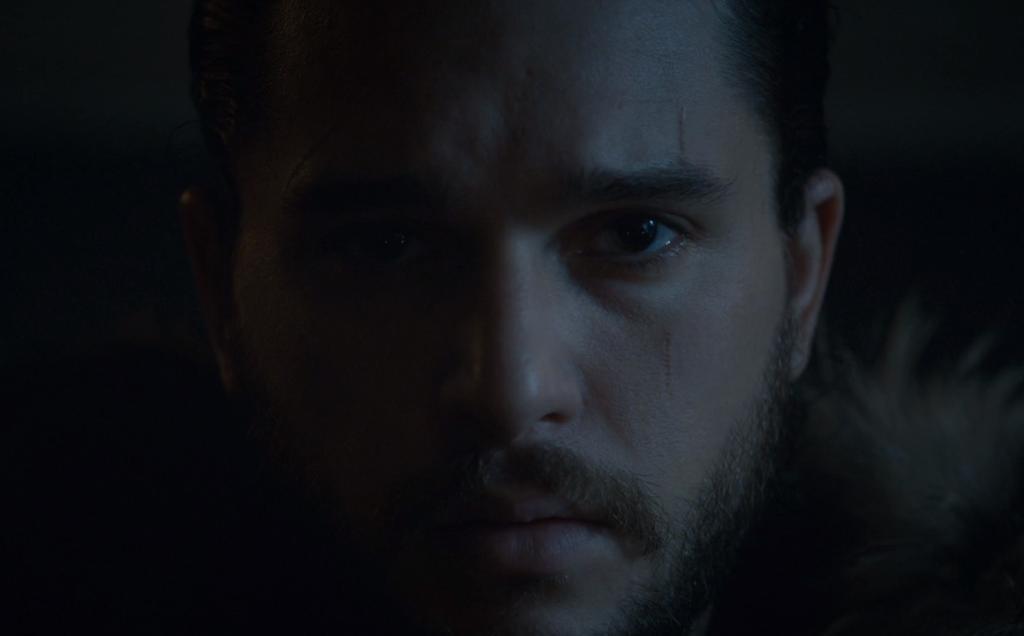 In the mythology of A Song of Ice and Fire, there’s a prophecy surrounding the return of Azor Ahai, or the “Prince That Was Promised.” The legend says that Azor was one of the last great heroes the world ever had, having vanquished the Others with his flaming sword, Lightbringer. The prophecy tells us that he’ll be reborn one day “amidst salt and smoke,” and many believe that this points to Jon Snow as the future savior of Westeros against the impending White Walker invasion. That said, it’s also not entirely gender specific in its wording, leaving the door open for Daenerys Targaryen to fill the role (who herself was “reborn” on Khal Drogo’s suspiciously smokey funeral pyre).

4. Tyrion is a Targaryen 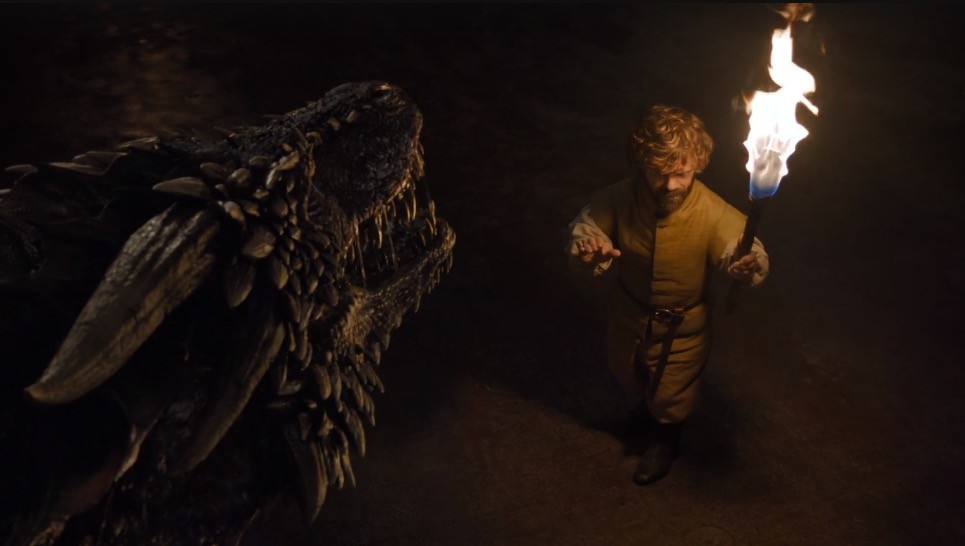 Given Tyrion Lannister’s status as a lifelong outcast in his own family, it certainly would make sense if he was from a different lineage altogether. It’s also a theory that doesn’t have a ton of concrete evidence per se, but it still holds at least a little bit of water. Before cross-bowing his “father,” Tywin cryptically tells Tyrion that he’s “no son of mine.” This could be a simple insult spewed at a disowned son, but what if it’s more literal than that?

Figure in the fact that Tyrion is described in the books as having the same silvery-blonde hair as Targaryens and some of the pieces begin to come together. It’s also rumored that the Mad King was infatuated with Joanna Lannister, so if he forced himself on her at any point, that would explain the disdain Tywin has had for Tyrion throughout his life, especially given that Joanna died giving birth to him. And not for nothing, Daenerys’ dragons took an immediate shine to Tyrion in Season 6 (pictured above). 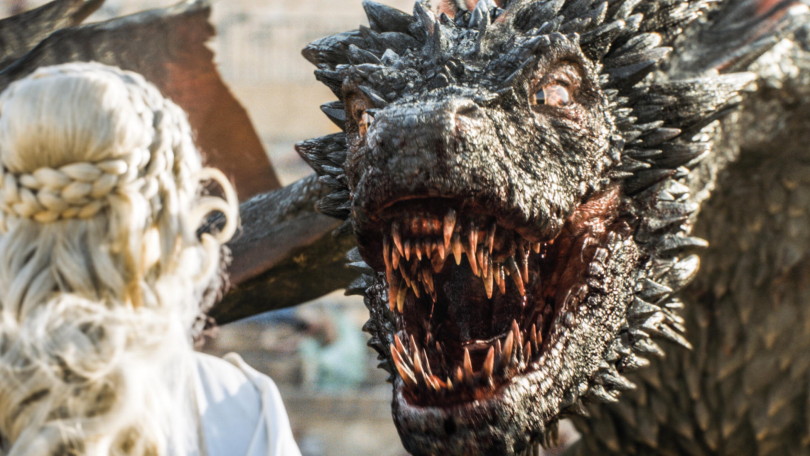 Despite being more rooted in the books than the HBO series, the “three-headed dragon” theory still makes sense for both. In Daenerys’ vision in the House of Undying, she sees Rhaegar with his young son Aegon, calling him the “Prince That Was Promised,” and going on to prophesy that “the dragon shall have three heads.”

Many have translated this to mean that the “three heads” are each of Daenerys’ dragons, and that she’ll ride them into battle alongside two other yet-to-be-determined Targaryens. We now know Jon is a member of the family, and if Tyrion turns out to be the same, that officially rounds out our three dragon-riders. This also comes with the added benefit of fulfilling the Azor Ahai prophecy, albeit translated in a far different way than it was originally worded.

6. Jaime is destined to kill Cersei 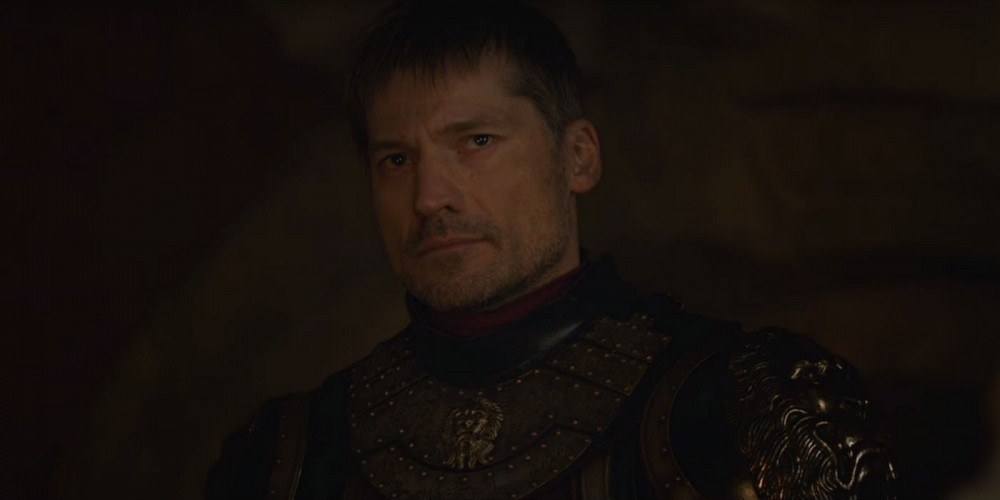 Many of the most prevalent Game of Thrones theories are based on prophecies, and this is no exception. When Cersei Lannister was a young girl, she encountered a soothsayer in the swamps known as Maggy the Frog. Maggy told Cersei that she would have three children, that those children would all die prematurely, and that she would be queen only until a “younger, more beautiful” one took her place.

So far, that’s all basically come true, making the final prediction of her death at the hands of a younger brother less a theory and more an inevitability. Jaime, as her younger twin, fits the bill, and now has a motive since Cersei has indirectly killed their last living child, while seizing the Iron Throne for herself. Additionally, it wouldn’t be the first time the man known as the Kingslayer has betrayed and murdered a monarch. 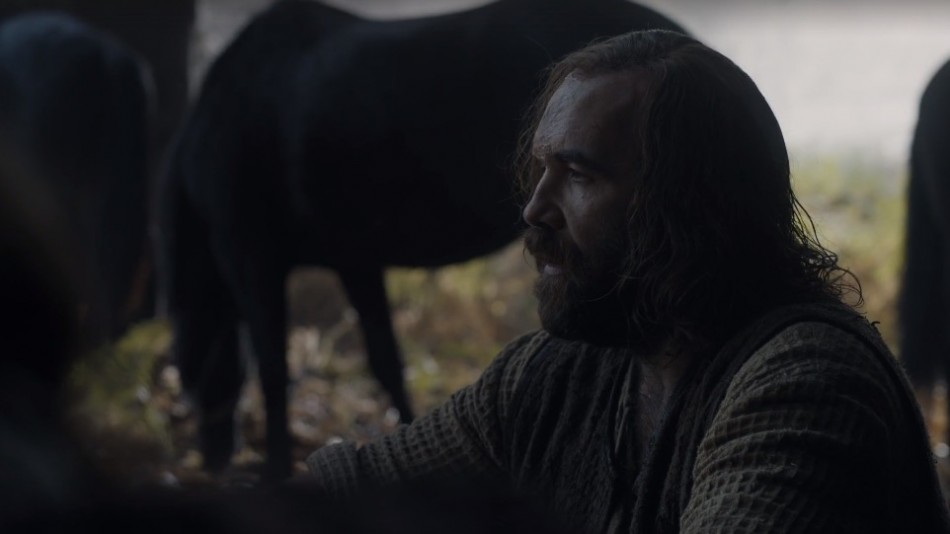 Of all the theories floating around right now, the one concerning a potential “Cleganebowl” is the one fans seem to want most. Sadly though, the most logical version of this was dashed at the end of Season 6. The predominant thinking was that the Faith Militant would call upon the recently-redeemed Sandor Clegane as their champion in Cersei’s trial-by-combat, putting him toe-to-toe with his zombified brother, Gregor. This never ended up happening, but there’s still reason to hold out hope with both Cleganes still among the living. It’s really just up to Game of Thrones to give the people what they want.

8. Meera and Jon are twins

It’s unclear how this would affect the character balance in Game of Thrones, but it’s worth talking about nonetheless. Both Meera Reed and Jon Snow have the same curly locks, are roughly the same age, and come from families with close ties. We know the only person who was with Ned Stark when Lyanna died giving birth was Meera’s father, Howland Reed. As the theory goes, Lyanna gave birth to twins, leading to a Luke/Leia scenario for Ned and Howland, where Jon and Meera were separated.

It’s still unclear what Meera’s role is past “that girl hanging out with Bran while he goes on spirit quests,” so a secret Targaryen lineage would go a long way toward giving her more to do. Admittedly, not everyone can be a secret Targaryen, so take this one with a grain of salt.

9. Bran will inadvertently allow the White Walkers to enter Westeros 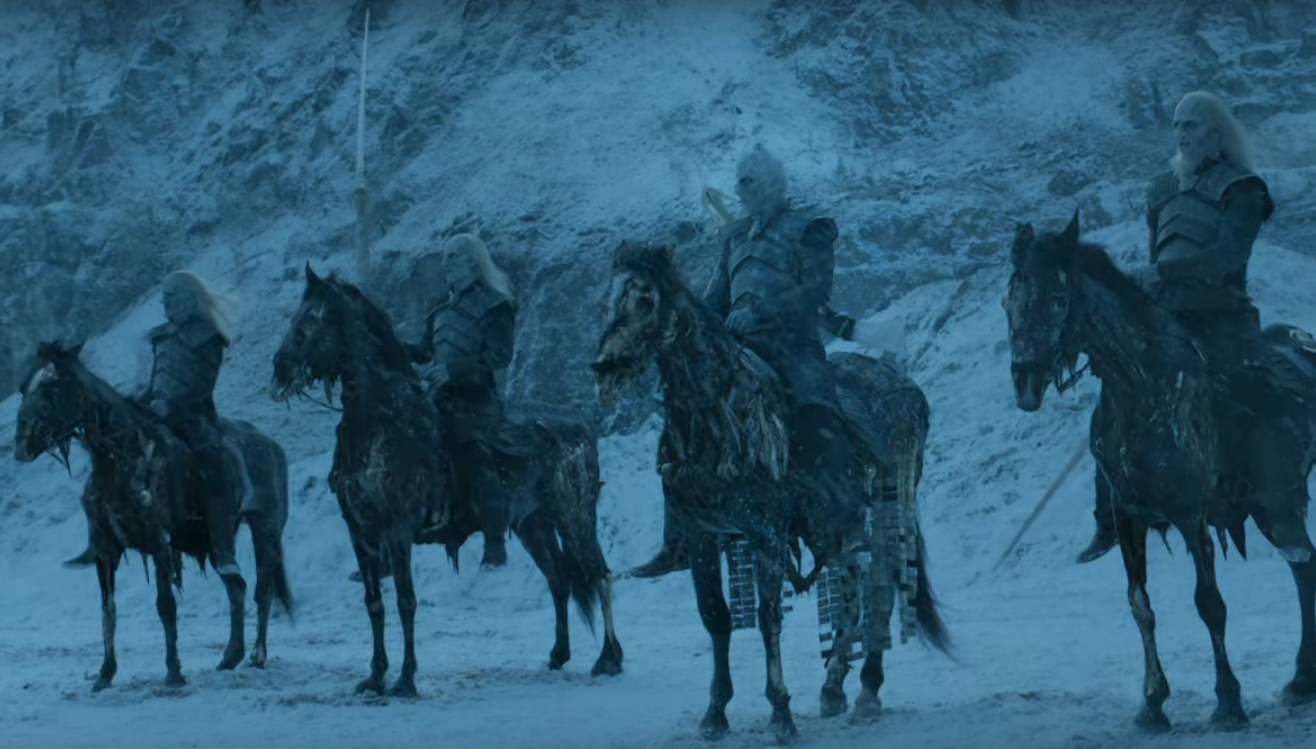 The episode last season titled “The Door” may have given us a huge hint at how the White Walkers might be able to penetrate the Wall and enter Westeros. In it, Bran is marked by the Night King, allowing the White Walker army to cross the Three-Eyed Raven’s magical barrier and enter his lair. Bran still has that mark, and many fans believe that if he were to pass through the Wall and return to Winterfell, it would lift the magic that keeps the White Walkers out, and leave the Seven Kingdoms vulnerable to a full-on zombie invasion.

10. Lady Stoneheart has been replaced by a different Stark 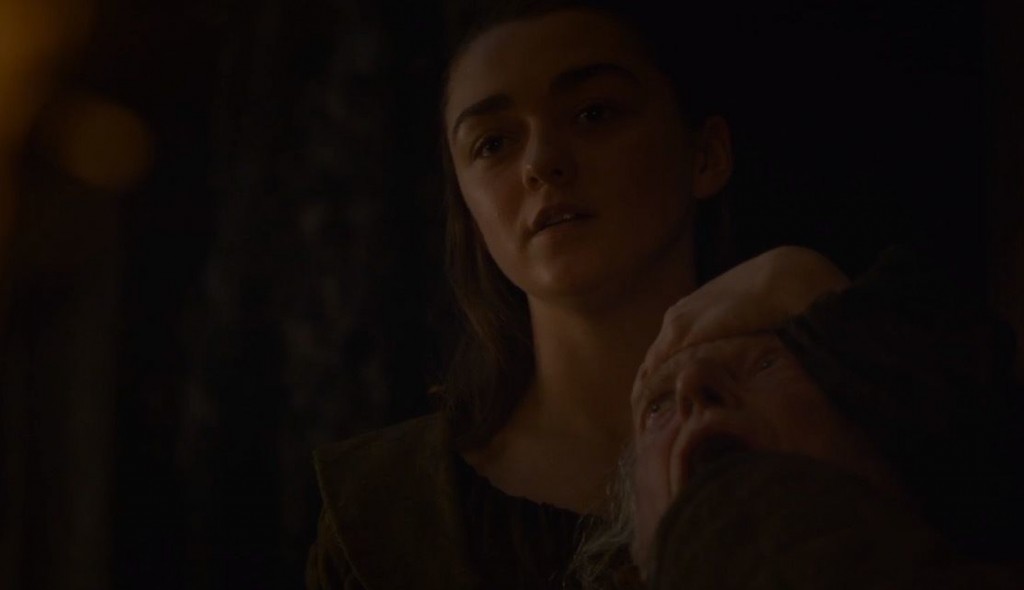 One of the biggest changes Game of Thrones made from the books involves Lady Stoneheart, or rather the lack of her character entirely. In the novels, Catelyn Stark is brought back from the dead as the fearsome Lady Stoneheart by Beric Dondarrion, and leads a merciless quest for vengeance against anyone even tangentially associated with the Lannisters. Eventually, she happens upon Brienne and Podrick, and thinking them loyal to Jaime Lannister, has them both hanged. Lady Stoneheart has yet to show up in the HBO series, but given Arya’s own recent revenge quest, it seems all too likely that she’ll be filling that role sometime in the near future.