In terms of game releases, we’re in something of a summer drought, with big AAA game launches few and far between. That makes it a great time to dig into the mostly smaller-scope titles you’ll find launching next week. So if you’ve had your fill of recent big-budget games like Overwatch and Doom, you’re in luck, because there are a whole bunch of games launching next week, many of them from independent developers.

There’s a little something for everyone in next week’s games, whether you’re into superheroes, board games, or underwater exploration. Read on for all the information you need about the games launching the week of August 1, 2016.

From Minecraft to Game of Thrones, it seems like developer Telltale will turn anything into an adventure game. That’s not a problem, because these decision-based, cinematic games tend to be really good, working with the unique strengths of each license. And with Batman’s long history in comics, movies, and video games, the Caped Crusader seems like an ideal character to star in an adventure game like this.

The first of five episodes, Realm of Shadows promises to let players in on Bruce Wayne’s dual life as a debonair billionaire and as a caped crime-fighting vigilante. So far, all we know about the story is that it pits Bruce and Batman against the mafioso Carmine Falcone. During the roughly two-hour adventure, we’ll also be brushing elbows with well-known characters like Catwoman, Alfred, Vicky Vale, and Harvey Dent. Since it’s coming to just about every gaming platform under the sun, Batman is probably most people’s best bet this week.

For those interested in a more relaxing, non-violent game to play, Abzu looks promising. If the trailer reminds you of the game Journey, that’s no coincidence, because that game’s lead artist, Matt Nava, started the studio that made Abzu. So what is it? It’s a game of underwater exploration. You play as a diver who ventures into uncharted waters just to see what’s going on. You’ll encounter all kinds of sea life, sunken ruins, forests of algae, and vast canyons. It looks strikingly beautiful, just like Journey, and should appeal to a similar crowd.

If you don’t need all that space, you might want to wait until August 23, when smaller and cheaper versions are slated to come out. You’ll be able to buy a 500GB Xbox One S for $300 that includes both Halo 5: Guardians and Halo: The Master Chief Collection. There will also be a 1TB version that costs $350 and comes with either the Halo games or Madden NFL 17.

Oddly enough, the 2TB version launching next week doesn’t come with any games. It’s confusing, but that’s kind of Microsoft’s style, isn’t it? For more information, check out our article “Should You Buy an Xbox One S?”

Japan gets lots of strange games aimed at men who are interested in the whole school girl thing. Gal*Gun is one of the few that makes its way to the West. The idea here is that you’re a male high school student who’s been hit by an ultra-potent dose of Cupid’s arrow, making all the girls fall in love with you and chase you around.

The problem is that you only have your eye on one particular girl, so you have to fend off the others by hitting them with some kind of pheromone shot, making them squeal in ecstasy and disappear. From time to time you’ll need to work a little harder and caress an “enemy’s” body by rubbing either the Vita’s touchscreen or the PS4 controller’s touchpad. It’s the kind of game that would make most people uncomfortable, but will appeal to a certain demographic that enjoys looking up anime girls’ skirts.

If you’re in the mood for some mindless co-op shooting, Livelock has you covered. It’s a top-down shooter that puts you in control of a mech and sends hordes of machines your way for you to mow down with gleeful ruthlessness. It looks like fun, especially if you can play it with a friend or two, but it’s probably smart to wait for reviews before buying. 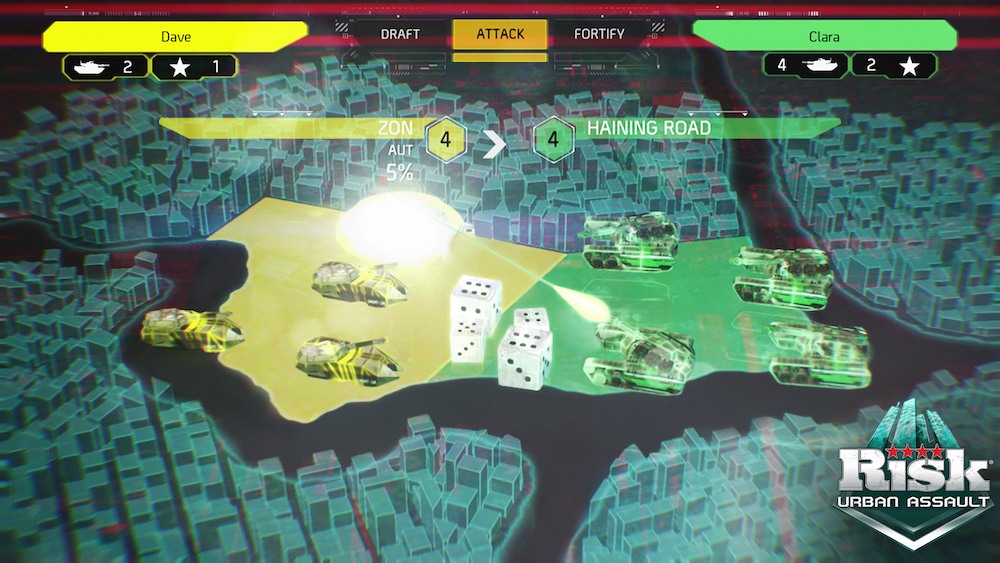 There’s a good chance you’ve played Risk, a board game about commanding an army to take over the world. Urban Assault is basically the same thing, but it transplants the action to a post-apocalyptic setting. The centers of control in this ruined world are New York, London, Paris, Hamburg, and Shanghai. The game retains the basics of the board game, but adds a few strategic considerations, including commanders, facilities, and alliances.

It may look like Tetris — it may look exactly like Tetris — but it’s not Tetris. Tricky Tower takes the building blocks of the classic Russian puzzle game and constructs something entirely different. The goal here is competitive tower building, but you have to watch out for gravity. If your tower is a little heavier on one side, it’ll start to tip. Weigh it down too much without proper support, and it’ll topple right over.

PlayStation Plus members get this game for free if they download it in August.

Square Enix hasn’t been shy about tossing Final Fantasy games old and new onto mobile devices in the past few years. Its latest effort is Mobius Final Fantasy, a free-to-play game that puts players in the shoes of one of many “Blankers” who wake up in a city under siege by the armies of Chaos, with no memory of who they are or how they got there. Your job is to become the hero the city needs and lead the charge against Chaos. Other than that, it’s a fairly standard role-playing game that probably won’t surprise fans of the franchise. If you pre-register before the game launches, you’ll get some extra goodies once you download it.