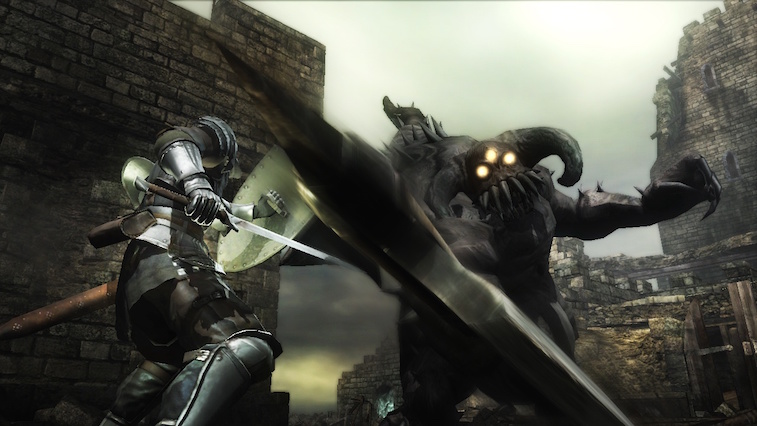 In real life, we prefer to feel comfortable and safe most of the time. So why, when we turn on a video game, do we often choose games that are dark and twisted? Think about it: You’ll crank up the A.C in the summer or heat in the winter. and settle into your groove on the couch, then pick up a controller and grit your teeth as you struggle to take down the slavering monsters that await.

Those are the kinds of games we’re going to focus on here. Games that don’t let you to feel safe. Games that make you play by their rules. Games that put you through the wringer no matter how powerful you are.

That’s why we play these games. When we face incredible odds and succeed, there’s nothing else like it. We don’t play stressful games because we want to feel threatened all the time. We play them for that feeling when we win.

Resident Evil 4 lets you know you’re never safe very early on. You start out exploring a quaint European village that happens to be populated by zombies. But you were prepared for that; you’ve played this series before.

Soon you hear a distant buzz. A car engine? No, a chainsaw. It gets louder and louder. Suddenly, a man with a bag over his head is rushing at you. You don’t have time to think, let alone raise your gun, before he stomps forward and chops through your neck with a single pitiless strike.

Your head falls to the ground like a cabbage. The screen goes black. Bloody letters appear: “You are dead.” But you already knew that. Welcome to Resident Evil 4.

In this game, death is such a constant threat that it’s almost comical. Enemies and traps abound, and you never know what form of death lies in wait when you take another step.

Darts shoot out of walls, spikes impale you from below, the floor crumbles underfoot. There’s no telling what grisly fate awaits the unwary traveler. Often, there’s no way to tell until it’s too late and you’re already dead.

The only solution? Keep trying. 1001 Spikes makes you memorize each level one step at a time in order to assemble a successful run. It’s a jungle out there.

The Souls series has become popular enough now that most players know what to expect when they dive in (hint: lots of death). But when Demon’s Souls first launched in 2009, players had little clue what kind of punishments lay in wait.

The game starts you off with a tutorial that climaxes in a small room with a boss roughly 20 times your size. Not only does this monster kill you in one hit, but his health bar stretches across the entire screen.

You don’t realize until it’s too late that you’re supposed to die here. That’s just the type of game this is. After a warm welcome like that, you learn there’s no safety to be found here.

By and large, older games were more challenging than newer games. Playing the Etrian Odyssey series is like being transported back to a simpler time, when random enemies in role-playing games could be powerful enough wipe out your entire party.

And if you haven’t saved your game in the past hour? There are no autosaves here. You’re going to have to play through that area again. Etrian Mystery Dungeon may look colorful and inviting, but this dungeon-crawling game has teeth, and it doesn’t hesitate to bite.

Seeing as you play as a bloody hunk of meat in this game, it’s not all that surprising that your character is vulnerable to nearly everything. In fact, the only things that don’t kill you are the floor and walls.

If you touch one of the zillions of saw blades, missiles, lasers, enemies, salt piles, spikes, or pits, you’re dead meat. There’s no armor. There’s no health bar or power-ups. There’s just a vulnerable little meat boy who has to start over if takes even the smallest scratch.

In case you haven’t experienced the terror of interstellar travel before, FTL will get you up to speed on the dozens of things you need to worry about. You’re in charge of all the systems on your ship, including oxygen, fuel, weapons, shields, and personnel.

As you travel through space, you’ll come upon combative aliens who want nothing more than to exterminate you. Any encounter could be your last, so it’s up to you to identify their weaknesses, formulate a plan of action, and carry it out — hopefully before they utterly destroy your ship.

It’s a great game, but it sure does keep you on edge.

You want survival horror? You get all of it you can handle in this freaky game that’s set in an asylum inhabited by all manner of terrifying creatures. Every room you enter could be a gateway to unimaginable scares. This is a game that constantly finds new ways to get under your skin during its five hour run-time. And thanks to your lack of any real way to fight back, you’ll spend most of the game running, hiding, and trying to stay alive.

Five Nights at Freddy’s puts you in the shoes of a night security guard doomed to watch security camera feeds in a dark, creepy building. As you cycle through the feeds, murderous animatronic creatures come closer when you’re not looking.

As an added source of stress, you have a limited amount of battery power to view the feeds and close the doors. The games create a enormous amount of dread that you can only really escape by quitting the game.

There’s no good reason for a cartoonish game that’s clearly a ripoff of Teenage Mutant Ninja Turtles to be teeth-grindingly difficult, but Battletoads is. One-hit kills abound in this downright unfair game that throws new ridiculous challenges at you in every level. I’m not even convinced it’s possible for normal humans to beat the game without using save and restore states. Whatever you do, don’t get too comfortable playing Battletoads. It’s out for your blood.

This mobile game is based on a concept so boiled down it hardly seems like a game at all. That, until you start playing it and realize that not only is it incredibly challenging, but it’s also highly addictive. You play as a tiny triangle in the center of a maze of concentric hexagons that close in on you in an ever-accelerating swirl. Your job is to position yourself just right so you can slip through a missing side of each hexagon.

Try not to get dizzy as you watch the video above see how good you can get if you keep at it. Just make sure not to blink.