‘Watch Dogs 2’ Isn’t as Good as Any Similar Game, No Matter How Hard It Tries

Ubisoft tried to give us all some time to forget how disappointing the original Watch Dogs was by waiting two and a half years to release Watch Dogs 2. Sadly, that just made the new game stand out on its own as a new, rather than continued, letdown — though it might not be the biggest letdown ever.

Watch Dogs 2 does have some redeeming qualities, fun moments, and points that help it escape the shadow of the first Watch Dogs, but these don’t save it. The sad fact is that Watch Dogs 2 has a lot of ideas that show their face in many other games, especially from Ubisoft — except those other games almost universally execute these ideas better. To that end, Watch Dogs 2 plays like a hodgepodge of other Ubisoft games that it can’t live up to. In order to see how it falls short, we’ll look at some of the other games that it plays like. 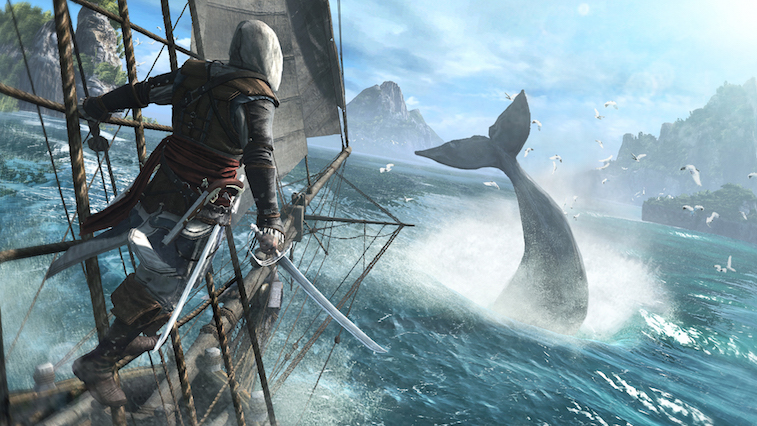 From the first Watch Dogs, the similarities to the Assassin’s Creed series were clear. Aiden ran around an open world with his coat billowing behind him as he parkoured to chase or flee from enemies, much like Ezio or Altair. Watch Dogs 2 does the same thing. Heck, the characters even have similarly inhuman eyes — just compare Assassin’s Creed’s eagle vision to Watch Dogs 2’s NetHack vision.

But Assassin’s Creed heroes have been way, way, way better at parkour. They truly felt like they could go anywhere and transition from ground to sky easily. Marcus in Watch Dogs 2 feels incredibly clunky by comparison. For one, he performs a lot of free running stunts, which sometimes feel like they’re executed randomly. He might be running from enemies but still decide that he’ll just saunter up to a ledge and pull a gainer, rather than just jumping down and fleeing. It’s this push for flair that hinders the parkour system. The game world also isn’t really built for interesting parkour travel. Instead you find yourself mostly just driving around, running direct routes, and occasionally jumping up a series of boxes to get somewhere.

The melee combat also shies in comparison to Assassin’s Creed’s. In Watch Dogs 2, Marcus is equipped with a pool cue attached to a bungee cord, and a couple whacks with it or the press of a single button is enough to dispatch the least and most heavily armored enemies alike. Compare that to the refined combat of Assassin’s Creed, which involves mastering various combat techniques and understanding the weaknesses of different enemies.

What a coincidence: another Ubisoft character that has special vision abilities (these ones at least explained by technology). Splinter Cell features another technology-proficient hero that sneaks around, hides behind cover, climbs around, and even uses drones to scout and interact with the level. Once again, Splinter Cell’s hero is better at traversing the world than Watch Dogs 2’s Marcus. Splinter Cell has better stealth dynamics, allowing things like simply using the dark to hide and hanging out of windows or from ledges. It may not feature an open world, but that appears to have allowed the game developers to focus on good level design, among other things. Watch Dogs 2’s stealth generally amounts to hiding and waiting for enemies to forget about you, droning the whole mission and walking away unnoticed, sliding along a few points of cover at the right time, or maybe (as I did to escape way too easily in the final mission) make a couple enemy cellphones ring so you can walk right under their noses — because SWAT carry around cellphones that they let distract them.

Open world aside, Splinter Cell: Blacklist may be the closest game to Watch Dogs 2. It has a very similar focus on sneaking around attached to cover, scouting out areas with a drone using lethal and non-lethal gadgets, and infiltrating unnoticed. But it also offers players an option to go in guns blazing. Melee combat in Splinter Cell: Blacklist may have also been fairly simple, but it was smooth and had a few more options. Even the puzzles presented in the Splinter Cell series were better than the mind-numbingly simple-yet-tedious hacking puzzles presented in Watch Dogs 2.

I’ll talk more about the weapons in Watch Dogs 2 later, but I’ll just note that they felt better in Splinter Cell.

The Division and Watch Dogs 2 have many similarities | Ubisoft

Ubisoft’s The Division is another open-world game that involves a lot of hiding behind cover. Those are the main similarities to Watch Dogs 2, but it just does it better. The open world here might not be as big or vibrant, but it’s a compelling disaster-ravaged New York that draws the gamer in.

The Division has various factions roaming the city, like Watch Dogs 2’s gangs, except you actually learn about those factions over the course of the campaign. The gangs in Watch Dogs 2 are essentially a bunch of tough guys that hang around in random plays and tell you to scram if you get to close, and occasionally they’re shoehorned into a mission.

Using cover and moving around in The Division feels tactical. You need to get to positions where you can attack or flush out the enemy while also keeping your flank safe. Enemies will push you, so you need to have a plan. In contrast, Watch Dogs 2 has you use a few pieces of cover just to slip by. It’s necessary in combat as well, but none of the combat feels as tactical.

Both games also suffer from bullet sponge enemies. While The Division tries to make high-level or boss enemies extra difficult by just giving them a ton of health, at least the guns you use in the game feel good to shoot them with. Armored enemies in Watch Dogs 2 are similar bullet sponges, some taking way too many shotgun rounds to the face to feel real, but none of the guns in the game feel like they can shoot anything more than confetti. Making matters worse, after an enemy stood his ground against bullets to the face and a grenade exploding in his hand, he’d succumb to a single melee attack that could have saved a lot of time.

The Arkham series of Batman games 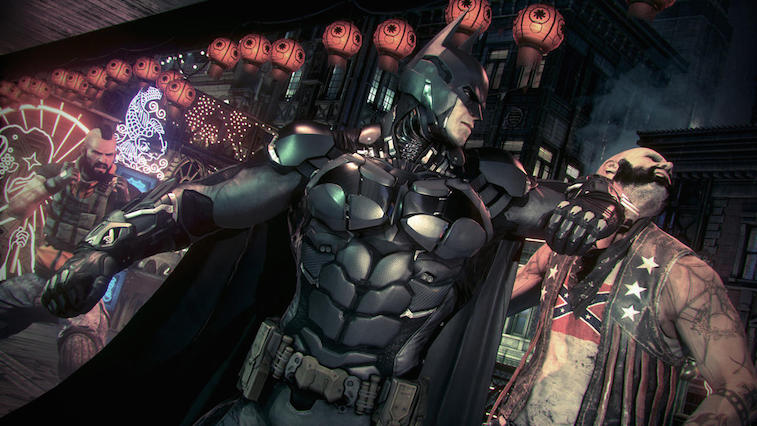 The series from Batman: Arkham Asylum to Batman: Arkham Knight have a lot of similarities to Watch Dogs 2’s gameplay, especially after Arkham City introduced an open world. Both let you run and jump around. Both rely on cover-based stealth mechanics. Both incorporate gadgets and environmental attacks. Both have puzzles. And both have special vision powers (there are really a lot of games with special vision powers).

The difference is obviously that the Batman games are way better. Almost all of them have been fantastic. Exploring the world is more fun. The enemies offer better challenges and combat is so well implemented in the game that it’s fun to fight a handful of thugs, a single supervillain, or a giant mob of enemies. The stealth system is more engaging and tactical. Heck, even the puzzles in the game can actually be head-scratchers.

And let’s not forget that you play as #$%&ing Batman. Marcus Holloway might be hip and talented, but he’s not Batman.

The online-friendly, open-world game that’s perhaps the most direct comparison is, of course, GTA V. The plots might be very different, but both put you in a sprawling city and let you roam freely to steal vehicles, mess with people, challenge gangs and cops, and screw with other players online.

The difference is that GTA V is crafted way better. The world is tons more fun to mess around in. After finishing the Watch Dogs 2 campaign, I didn’t really feel myself drawn to the idea of playing around in the digital San Francisco. I couldn’t crash helicopters into highway traffic while I parachute to safety. I couldn’t fly a fighter jet through the city skyline.

Watch Dogs 2’s online modes were fairly fun. I enjoyed slipping into someone else’s game to hack them. Teaming up with other players to tackle a mission was also a pleasure, though mostly because poor coordination lead to some amusing antics. But I wouldn’t put it on the same level as GTA Online, which offers a lot more ways to play or mess with other players online. Sure, maybe you can’t hack another player’s car to make them steer off a cliff, but you can drive by them, let them think they’re safe as they cruise away, and then detonate the C4 you tossed from your car window as you passed. Sorry, Watch Dogs 2, but GTA takes the cake here.

Some of the game was fun. A few missions were good. And there were story moments that got a good giggle. Remembering the overly dramatic and one-note story of the original Watch Dogs, it was definitely refreshing to have some edgy fun in missions, but that wasn’t enough, nor consistent.

The campaign took less than 20 hours to beat. While that’s plenty of time, for a large open world, that felt pretty quick, especially since the sandbox isn’t super engaging. And the story felt all over the place. Characters went from playful to sad to angry to playful too quickly. And the open mission progression might have you laughing about hacking someone only a few minutes after a main character dies and you’re supposed to be out getting revenge. Say what you will about Aiden from the first Watch Dogs, but at least he was consistent.

Sometimes the gaps between campaign missions were even too open. When one thing should have logically followed another, it might make it a separate mission and even take a long time to offer that mission. Sometimes, I’d find myself running off to a new location only to receive the follow-up mission that starts right where the previous mission ended, forcing me to circle back.

Too many missions were also just errands. Run here. Walk there. Hey, get in this painfully-slow vehicle and drive it to this location where the actual mission part of the mission begins. And then even when there is a mission going, it can often be overly punctuated by cutscenes. The game also was too easy to complete — drones could be sent to do all the work until the game insisted something had to be done by hand, which generally was more of a nuisance than refreshing change of pace.

While hopes were high that Watch Dogs 2 would deliver on the promise shown by the first Watch Dogs, it doesn’t feel like it happened. The only thing I found myself really enjoying was a section of a mission that amounted to a simple minigame controlling a hyper-destructive spider robot, but that was over in a matter of minutes and then I was back to driving from A to B and calling SWAT cellphones to finish simple missions that seem to have no real impact on the game world around me.

If you were looking forward to playing Watch Dogs 2, just go play any of the other games mentioned in this review. You’ll get them cheaper and likely enjoy them more.