‘Ghostbusters 3′ Should Be Great, but We Might Hate It Anyway 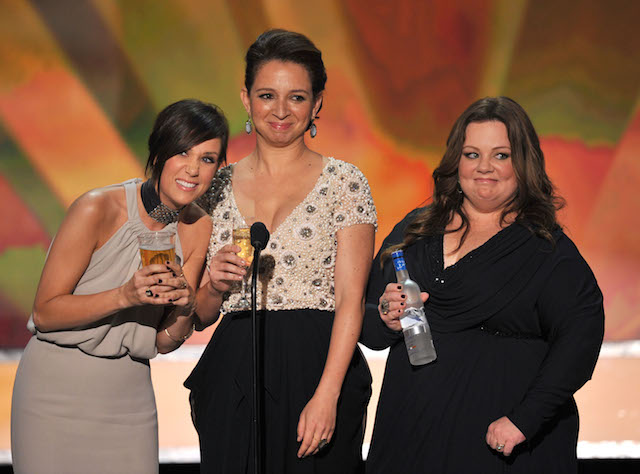 After months of rumors as to which ladies would be taking on the roles of Bill Murray, Dan Aykroyd, and Harold Ramis, Bridesmaids director Paul Feig has finally announced the cast of his upcoming female-led reboot of the Ghostbusters franchise and set a date for the picture to be released. The director tweeted that Kristen Wiig, Melissa McCarthy, Kate McKinnon, and Leslie Jones will round out the film’s ensemble cast of supernatural crime fighters and that the movie will hit theaters on July 22, 2016.

News came out last summer that Feig would be directing the long-awaited third Ghostbusters film and had decided to cast women in the lead roles. That information was met with some dismay, as some fans feel it’s too late to faithfully return to the ‘80s franchise, and some weren’t too keen on the idea of ladies busting ghosts rather than Murray, Aykroyd, and the late Ramis. Others were thrilled about the idea given the success critically and commercially Feig had with Bridesmaids, which is credited with making Wiig and McCarthy bona fide movie stars.

Bridesmaids was released in 2011 and introduced the world to the comic talents of many very funny women. Before this movie, Wiig was known mostly for Saturday Night Live and funny bit parts. Feig gave her the chance to show that she could carry a Hollywood blockbuster. McCarthy had been on Gilmore Girls and also done smaller parts in movies, but her raunchy performance in Bridesmaids served as her breakout as well. Rose Byrne, SNL’s Maya Rudolph, and The Office’s Ellie Kemper were also a part of the hilarious ensemble cast made mostly of television actresses.

Some were skeptical such a movie could be a success, given the lack of male lead characters and well-known movie stars, but it was an instant hit. Bridesmaids has a 90% Fresh rating on Rotten Tomatoes, with critics saying that the authentic-feeling characters and outrageous humor made for an unexpectedly great comedy. It was also a hit at the box office, making $169 million domestically during its run in theaters according to Box Office Mojo.

It’s likely Feig will be able to achieve the same chemistry by again working with Wiig and McCarthy on Ghostbusters 3. Both ladies’ star power have risen considerably since Bridesmaids, and combining their draw with that of an iconic comedy franchise like Ghostbusters will almost guarantee the movie success at the box office. Wiig and McCarthy have both gone on to lead multiple acclaimed comedy films, so their success with Bridesmaids was not just a fluke. The women are talented and funny and their increased fame will draw people into the theaters.

McKinnon and Jones are both currently actresses on SNL, and this opportunity could be for them what Bridesmaids was for McCarthy and Wiig. Jones has been a writer and a star for the most recent season of SNL and has played characters including a relationship expert and “Black Annie.” McKinnon has been on SNL since 2012 and has played Justin Bieber, Keith Urban, and Dame Maggie Smith among other characters.

Ghostbusters 3 has a lot working in its favor, but that doesn’t necessarily guarantee the movie will do justice to the 1984 classic. Thirty years is a long time to wait for a reboot and the chemistry between Murray, Aykroyd, and Ramis was what made Ghostbusters so great in the first place. There is also the tired old grumble that Hollywood never does anything original anymore. But, knowing that sequels and reboots almost always gross more than the original, it’s no wonder Hollywood won’t stop turning them out. Feig has also said in an interview with Empire that he wants the reboot to be “scarier than the original,” which could end up making the humor fall flat or not appealing to fans of the original. The director said he wants the movie to be a “scary comedy,” which is an unusual genre and another creative risk for the film.

It remains to be seen if these risks will pay off or if they’ll be a turnoff. Given the success that Feig and these actresses have had working together plus the franchise recognition that comes with the Ghostbusters name and the curiosity audiences will have to see what a Ghostbusters movie could be like 30 years later with women in the lead roles, it seems highly likely that the movie will be a success critically and at the box office, even if some of the original movie’s fans don’t like it.