‘Ghostbusters’: Everything We Learned From the Trailer

After months of anticipation, the full-length trailer for the upcoming Ghostbusters has finally been released. This is the first official footage from the Paul Feig-directed flick, starring Melissa McCarthy, Kristen Wiig, Leslie Jones, and Kate McKinnon, that we’ve seen so far and luckily for fans, it contains all kinds of new clues about what we can expect to see when the film hits theaters this summer.

The trailer starts off nostalgically enough, with very familiar-looking visuals and music, but it doesn’t take long to get a sense of some of the changes and updates we’ll see in this latest reboot. Here’s everything we’ve learned about the new Ghostbusters from the trailer:

1. All of the Ghostbusters have their own strengths

Between the previously released character descriptions and official photos, we’ve already gotten a pretty good sense of the new Ghostbusters team. However, the trailer provides a rundown (narrated by McCarthy’s Abby Yates) of what each individual member brings to the table.

As a paranormal researcher, Yates knows everything there is to know about ghost activity. Meanwhile, Wiig’s Erin Gilbert is an expert in particle physics, and McKinnon’s Jillian Holtzman is a nuclear engineer that uses her skills to trick out all their weaponry. As for Jones’s Patty Tolan, she’s more of an everyman, but volunteers to serve as their New York City guide after having a ghost encounter of her own. Plus, she has a car (but more on that later). 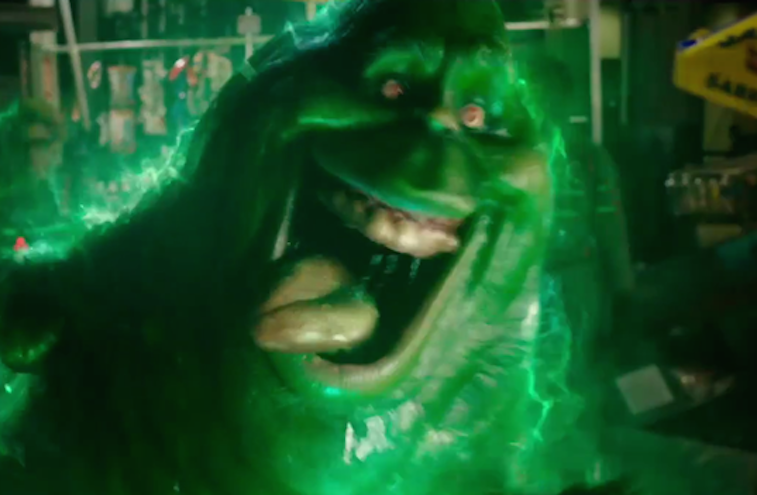 Feig had already teased that Slimer would make a return in this latest iteration of Ghostbusters, but now it’s official. A slightly updated version of the green ghost from the original film can be seen in the new trailer.

3. The ghosts have a new twist 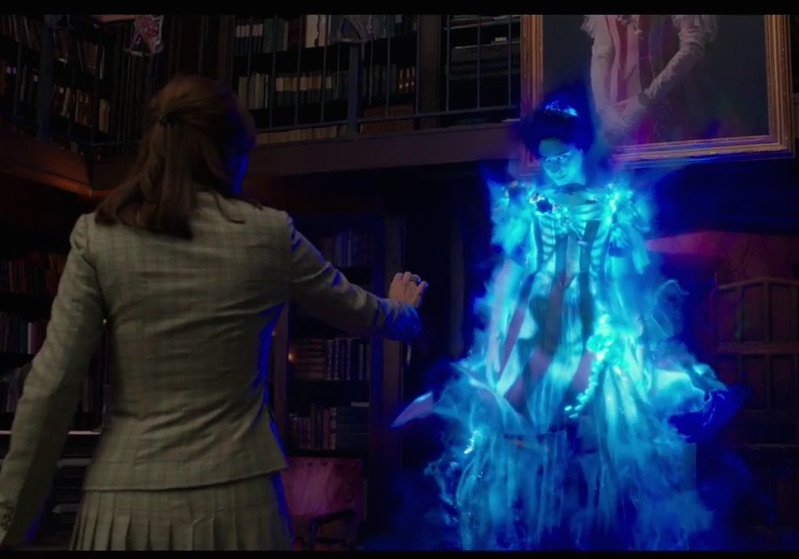 Obviously, the new Ghostbusters come together after New York City becomes overrun with apparitions. But there’s an added twist to these ghosts: They aren’t just spooky-looking, they can also possess humans. That leads to some Exorcist-style purifying, as seen in a funny homage towards the end of the trailer.

Most of the ghosts will also have a humanoid form, as Feig wanted to desire to give the actors someone to play off of. “The woman who plays the first ghost, who ecto-projects all over Kristen, that was an actor in an LED suit, in that dress, hoisted up in this thing that picked her up and pushed her out,” he explained while introducing the trailer at a recent Sony panel, per EW. “It was important to me that they have that real ghost quality to them.” 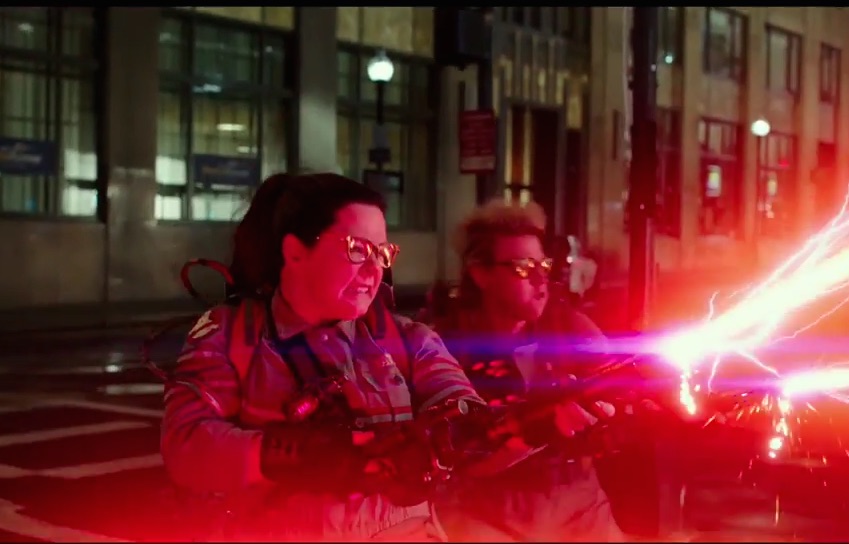 The new Ghostbusters still use proton packs, but these aren’t like the kind you’ve seen before. Thanks to McKinnon’s nuclear physicist character, all of the gear that the team uses undergoes some major upgrading. You can get a taste of the newly improved weaponry in the trailer, including new sidearms.

“I wanted to give a nod to the new hardware and the (total badness) of these women,” Feig said of the trailer. “We know there’s going to be comedy and this story. But having these clips with weapons coming out and fighting, that’s the thing people are going to be excited about.”

5. The Ecto-1 Ghostbuster mobile gets a new look 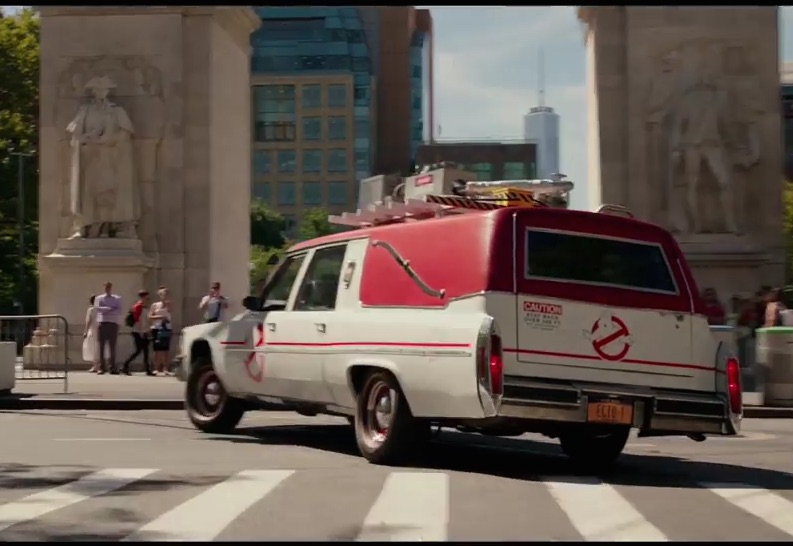 The trailer showcases the new Ecto-1, which is a borrowed 1980s Cadillac hearse this time around. In addition to having plenty of room for the ghost-busting equimpment the team teens, the car — after a paint job, the addition of a big yellow siren, and some other revamping — also has what Feig describes as a “fun look.”

6. Chris Hemsworth is a terrible secretary 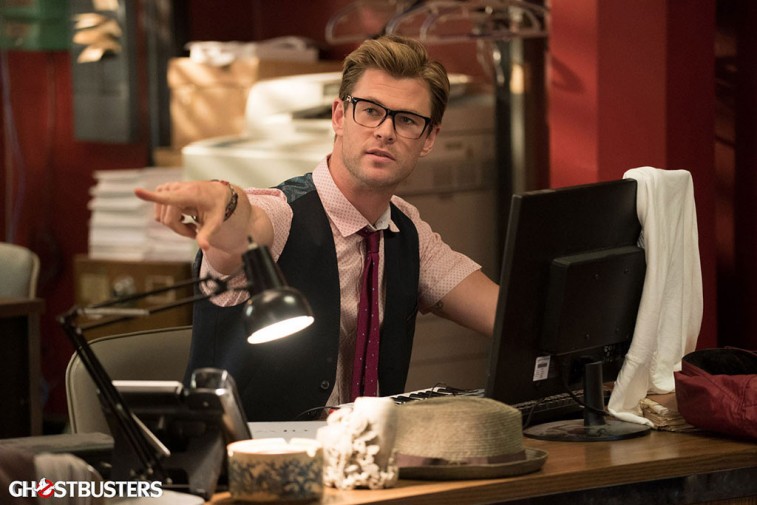 As previously revealed, Hemsworth will play receptionist to the Ghostbusters team. While he only makes a brief appearance in the trailer (at around 1:57, when he kicks open a door), it’s pretty clear we can expect his character will bring some laughs. “These women are trying so hard to make this a legitimate business and he’s not the most helpful person to be at the front of that,” co-writer Katie Dippold said of his role, per EW.

The trailer recalls the original Ghostbusters with a text homage at the beginning, but Feig says you shouldn’t call this a sequel. While the movie will include playful nods to the original films (including cameos from the original stars), the director reiterates that the new Ghostbusters should be considered a complete reboot — which also explains why everyone is still so skeptical of ghosts in the teaser.

“We wanted to imagine what it would be like to be a Ghostbuster and no one takes you seriously,” Dippold said. “And to have that moment of people seeing for the first time that, ‘Wait, ghosts are real and they are attacking us!'”

Feig also said he wanted to make science and technology play a crucial part of the upcoming film. “I didn’t like the idea of them being handed technology,” I wanted to see it develop. I’m such a tech head,” he said, later adding. “It was really important to us to make them scientists.”

The Ghostbusters reboot will hit theaters on July 15, 2016.