As we enter into the final countdown toward the release of Rogue One: A Star Wars Story, anticipation is running high. Fans are eagerly awaiting a new chapter in the Star Wars saga, while members of the media try to fight back their own fandom in order to maintain an air of professionalism. Last week, we had that put to the test, after getting invited by Gillette to attend a top secret Rogue One event at the legendary Pinewood Studios in London. Alongside an excited and enthusiastic press corps numbering upwards of 20, we hopped on a bus from London, eagerly awaiting what was in store.

What we got was nothing short of thrilling. After spending the day at the London Eye, we hopped on a bus, arrived at Pinewood, and filed into a sound stage doubling as the venue for the night’s festivities. Inside was a massive display of costumes from Rogue One, featuring every major character from the film. Gillette proceeded to unveil their own “Every story has a face campaign,” complete with footage straight from the jungles of Scarif. A brief Q&A with Star Wars visual effects maestro Neal Scanlan followed, before we were left to wander the room freely to look at the costumes up close and personal. Here’s what saw. 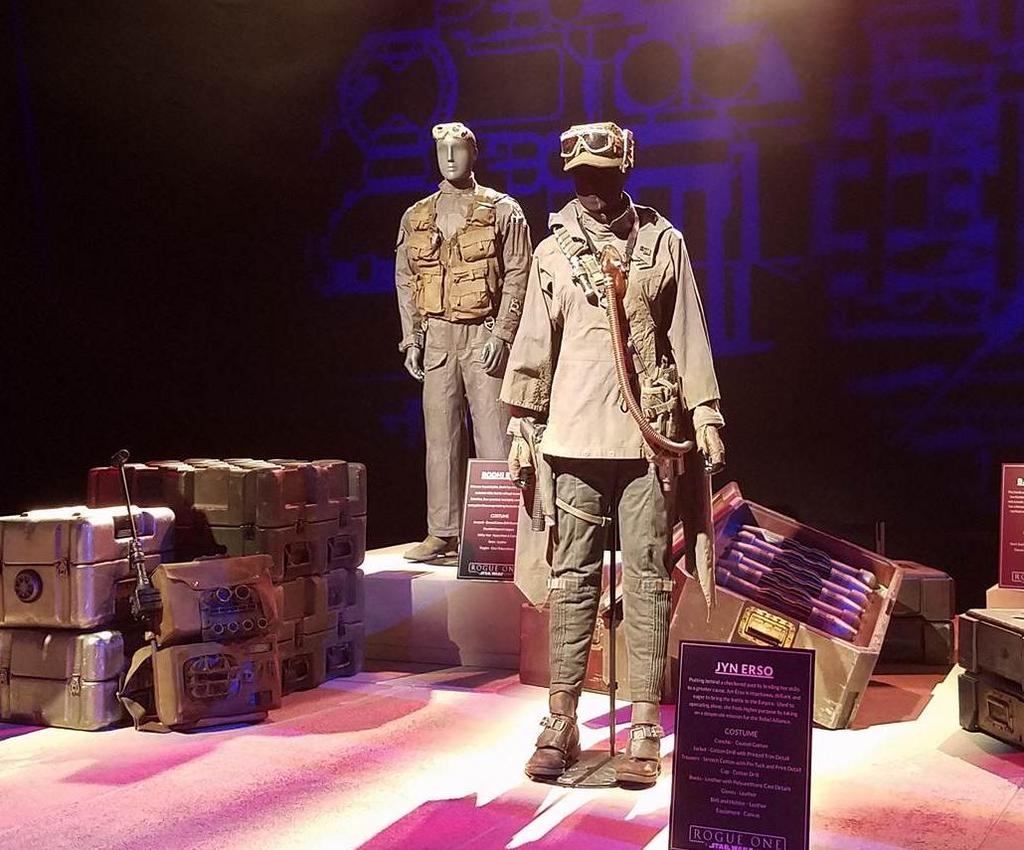 As Rogue One‘s lead, Jyn Erso is the latest heroine to enter the Star Wars universe. Theories abound as to whether she’ll carry some sort of link to Rey and the new trilogy, although it seems more likely that she’ll be a self-contained hero of the Rebellion. All theories aside, her costume is fairly simple, donning a hooded poncho, a blaster, and a breathing mask that looks like something a pilot might wear. The character card directly below her costume describes Jyn as “impetuous, defiant, and eager to bring the battle to the Empire,” all characteristics that align well with what we’ve seen from her so far in early trailers. 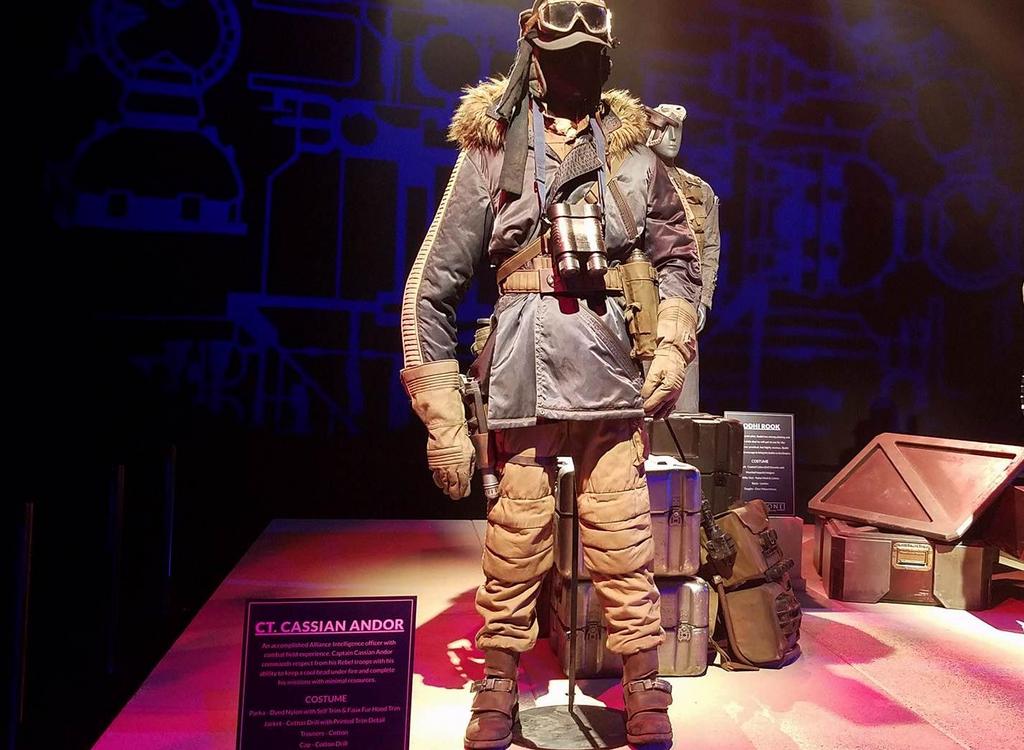 Played by Diego Luna, Captain Cassian Andor is the catalyst for bringing our team of Rebels together under a single cause. Andor is billed as “an accomplished Alliance Intelligence officer with combat field experience,” often tasked to operate “with minimal resources.” The costume we see above is the one we’ve seen him don in trailers on what appears to be the Imperial-occupied Jedha. As a planet housing massive stores of the crystals used to power the Death Star’s laser, there’s little doubt that the locale is going to be an important battlefield for the Rebellion in Rogue One. 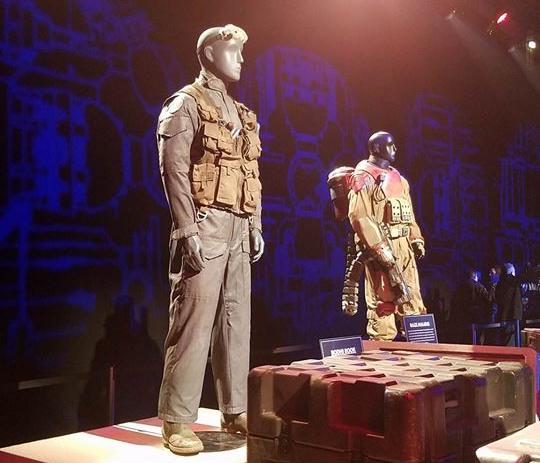 Up until recently, we haven’t been told a whole lot about Bodhi Rook (Riz Ahmed). We see him uttering the “Rogue One” callsign in the latest trailer for the film, but past that he’s largely remained a mystery in terms of his origin. The character card below his costume though lends us some intriguing information on his background, revealing that Bodhi is in fact a former Imperial pilot who defected to the Rebellion. This makes him a key member of the team trying to infiltrate the Empire’s operation on Scarif, especially given his background in Imperial protocol. 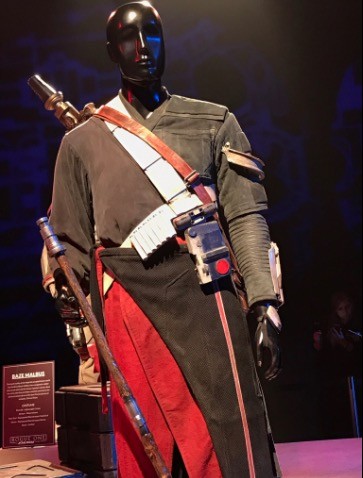 Chirrut Îmwe is one of Rogue One‘s more interesting new characters, played by martial arts legend Donnie Yen. In trailers, we’ve see Îmwe dispatching a gaggle of Stormtroopers with nothing more than a staff, while carrying a devout faith in the Force. Despite his beliefs, it’s worth noting that his character description claims “he lacks Force abilities,” making it his considerable fighting skills that are that much more impressive given his blindness. 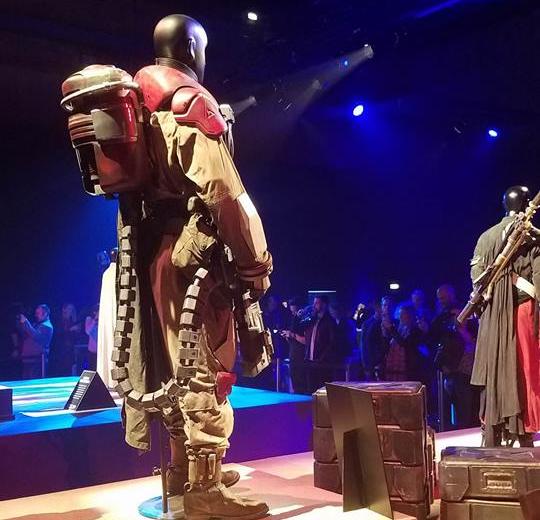 Baze Malbus is painted as Îmwe’s cohort, although he holds a much grimmer outlook on the state of the Galaxy. In many ways, his pessimism is balanced out by Îmwe’s brighter demeanor, and together they’re a formidable team. From behind his costume display, we got a good look at his massive repeater gun, as well as the giant pack he wears in order to use it. He’s spent much of his life living under Imperial occupation on Jedha, giving him a pretty big stake in fighting the Empire in Rogue One.

6. Director Krennic and his Death Troopers 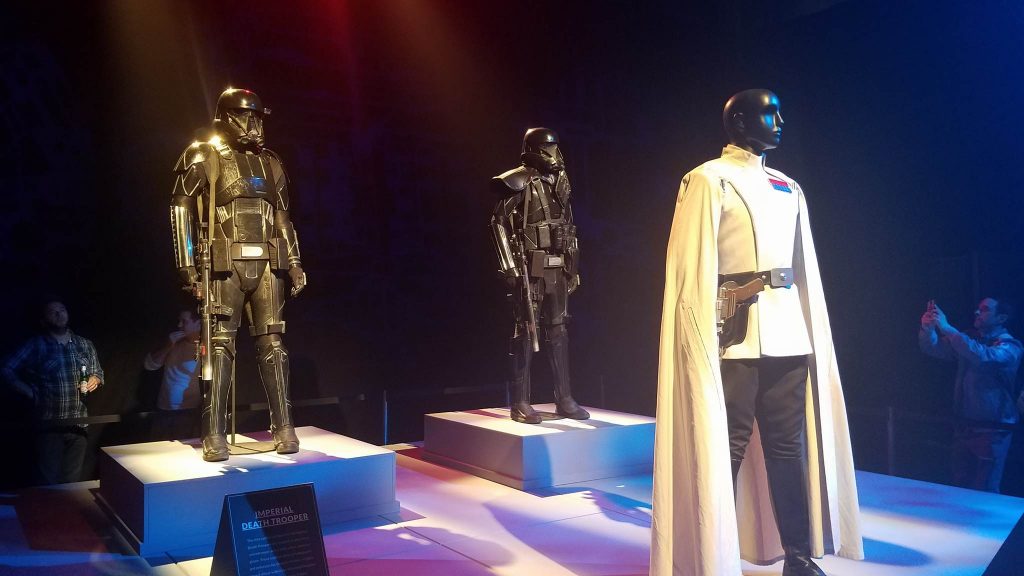 Little has been revealed about the exact function of the Imperial Death Troopers, but what we saw at Pinewood Studios revealed that among many other functions, they serve as Director Krennic’s personal bodyguards. For Krennic, we were shown the trademark white uniform seen in the trailers, with a description noting how he’s “staked his reputation on the delivery of (the Death Star) to the Emperor.” This puts him at odds with Grand Moff Tarkin, who himself is known as the primary overseer of the Death Star, and in recent rumors, is pegged as a professional rival of sorts to Krennic.

Pinewood Studios has played home to everything from James Bond to Harry Potter, as well as a large swathe of the Star Wars franchise as we know it. To be able to fly to London to see the legendary Star Wars locale was incredible to say the least, and thanks to Gillette, we were all treated to the work trip of a lifetime.