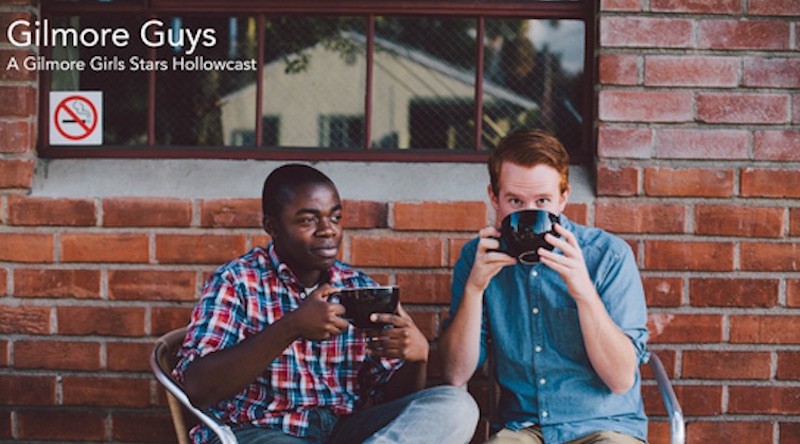 News of Netflix’s upcoming Gilmore Girls revival caused a huge frenzy among fans, but there were two people who were probably more excited than everyone else: Kevin Porter and Demi Adejuyigbe, hosts of the hit podcast, Gilmore Guys.

As it’s name suggests, the podcast follows longtime fan Porter and series newbie, Adejuyigbe, as they watch all seven seasons of the television show on Netflix and dissect each episode from their respective viewpoints. The two launched the podcast in 2014 when Netflix added the entirety of the series to its instant streaming catalogue. Two years and a series of fortuitously timed events later (including a much-hyped Gilmore Girls cast reunion last year and the Serial-induced surge of interest in the podcast format), Gilmore Guys has garnered a devoted following and is set to draw even more attention with its reportage of the forthcoming Gilmore Girls: A Year in the Life.

“I was really overwhelmed because for me, my relationship to Gilmore Girls now is very intimate, just in that the last year and a half of my life has been about the show,” Porter said of his reaction to news of the upcoming revival. “So hearing that there’s more content and the show is finally going to get the ending it was supposed to get, it was so fulfilling on several levels.”

Porter has a long history with Gilmore Girls that extends to well before his podcast days. He watched the family-themed comedy drama when it aired on the WB (now The CW) from 2000 to 2007. But though he’s a veteran member of the show’s fanbase, he never quite expected it to have the impact it’s since had on his life. Since its debut, the Gilmore Guys podcast has garnered a loyal following with their colorful commentary on all things Gilmore — from the show’s multitude of pop culture references to the characters’ most questionable fashionable moments. The series has even featured interviews with original members of the cast, including Scott Patterson, Kelly Bishop, and Liza Weil.

“In my dream of dreams, I never thought we would be legit enough to book the guests that we want, to get people we’ve admired in comedy on the show,” Porter said of the podcast’s unexpected success. “We didn’t expect any of those things but it made them all the sweeter when we got them. It’s been great and overwhelming. ”

So why Gilmore Girls, you might ask? As Porter describes, the show has a little something for everyone, regardless of gender or age. “The main reason to watch it is because it’s a terrific show,” he said, noting that those who are quick to dismiss it should take a closer look.

Between its infamously fast-paced dialogue and quirky characters, Porter suggests that Gilmore Girls is more akin to Aaron Sorkin-penned projects like The West Wing or Sports Night than typical teenage dramas like Dawson’s Creek or One Tree Hill. “Lorelai Gilmore could be C.J .Cregg [of The West Wing],” he said, also adding that the show’s weird small town setting of Stars Hollow is similar to that of Twin Peaks and Northern Exposure.

It’s this type of thoughtful analysis of the series that has helped make Porter and Adejuyigbe’s podcast so popular. Though two guys discussing Gilmore Girls might sound like it should be rife with sarcasm, the hosts are never snarky about it, instead genuinely welcoming questions and debates from other loyal fans. The duo has now taken their act on the road, creating a tour of Gilmore Guys live shows in which they perform their episodical analysis on stages at various theaters across the country. According to their website, the live shows, which are also available to watch on YouTube (as seen above), are currently set to run through mid-October.

Netflix’s Gilmore Girls: A Year in the Life premieres shortly after and Porter says he and Adejuyigbe are already plotting the best way to recap the show. “It’s going to have to change because right now, the podcast, it is looking back at this period in time,” he said. “These new Netflix episodes are current. They are picking up eight years after the fact of the first seven seasons. So we want to figure out a way to make the podcast feel just as current, but still be comprehensive and have as much nuance and attention to detail and fun as all the episodes we’ve done before.”

Today on a fresh #GilmoreGuys we go through your emails and voicemails before we hit the road! (Thanks to @molly_bangles for the lovely garland!)

The two also hope to bring more notable names to the podcast. The ideal guest? Amy Sherman Palladino, the creator of Gilmore Girls, would be the “number one get.” As fans know, Palladino penned the first six seasons, but departed the series ahead of Season 7 — leaving viewers in the dark as to those infamous four last words that she had long teased as the end of the show. Now that she’s back steering the wheel for Netflix’s revival, Porter — like all loyal Gilmore fans — is simply looking forward to seeing the show finally get the ending it deserves.

“There’s a reason and rationale for this revival that does not exist for other TV revivals, as good as they might be,” he said of the series’ long-awaited resolution.

As for life after the revival, Porter says he and Adejuyigbe are contemplating producing a podcast about the one and only season of Palladino’s other show, Bunheads, and may continue to work together on other projects. For now though, he’s just focusing on the much anticipated return of Gilmore Girls.

“I’m just really excited to be a part of the ongoing and current conversation of Gilmore Girls and these Netflix episodes,” he said.

You can listen to the Gilmore Guys podcast on their site and on iTunes.