‘Godzilla’ Destroys Jon Hamm and Everything Else This Weekend 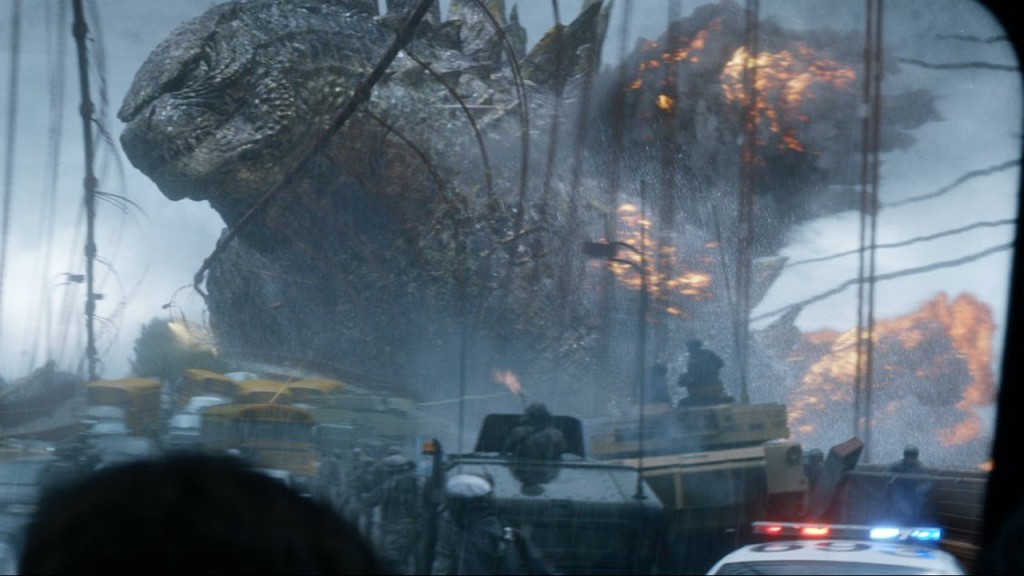 Godzilla stomped the competition at the box office, pulling in over $90 million during its debut weekend, though Neighbors had an admirable second week with $25 million. Godzilla earned favorable reviews from most mainstream critics, though most reviews mentioned, in some capacity, the film’s emphasis on monster spectacle and suspense and not the human story. (David Ehrlich of The Dissolve wrote a piece defending Godzilla as a “post-human blockbuster,” which has been well-received.)

Compared to Roland Emmerich’s 1998 Godzilla film starring Matthew Broderick, Gareth Edwards’ film is like Citizen Kane. (Emmerich’s film is unlovingly referred to as Zilla by the Toho gang, who don’t accept it as canon.)

“Director Gareth Edwards (a visual effects artist who made his directorial debut with the well-regarded 2010 indie Monsters) can compose a nice shot, edit an action sequence with something like causal logic, and even pull off the occasional mildly winking joke — all of which makes Godzilla’s two-hour running time bump along more agreeably than it might have.”

It’s a bracing tonic for the bored palate of the mainstream moviegoer, and one of the most intriguing big-budget breakthrough films since Steven Spielberg made Jaws. (Edwards’ only previous feature is the 2010 low-budget indie Monsters.) This is a movie of tremendous visual daring, magnificent special-effects work and surprising moral gravity. Its magic lies in the big things — like, the really big things, which take their time showing up but are totally worth it — and the small ones.

The sheer filmmaking craft on display here shames almost any comparably budgeted superhero picture you can name. The movie borrows from Steven Spielberg’s Jaws, Close Encounters of the Third Kind, and War of the Worlds, as well as from earlier popcorn classics that shaped Spielberg. (The Cranston/Binoche/Taylor-Johnson family has the surname Brody, like the family in Jaws, and Cranston’s traumatized seeker is basically Roy Neary from Close Encounters.) Godzilla doesn’t just show, it unveils. It builds sequences gradually, withholding important information until the end of a scene or sequence.

Anthony Lane of The New Yorker was less enthusiastic:

I was impressed by the film’s idea that the nuclear tests in the Pacific in the nineteen-fifties were not tests at all but attempts to destroy what lurked beneath the oceans. The emotional crux of the movie, however, after all the international to-and-fro, turns out to be the safety and togetherness of one middle-class family on the West Coast. The leading man of Monsters, gazing from the Zone toward a walled frontier, murmurs, “It’s different looking at America from the outside in,” but the new film never risks such an audacious thought. Instead, it takes refuge on the inside, and girds itself against the enemies from beyond.

Finally, The Atlantic‘s Christopher Orr said that Godzilla was turned into a supporting character in his own film, which isn’t really true, but that’s okay.

Fairing less well this past weekend was Jon Hamm’s Million Dollar Arm, a jovial little film about a man who finds redemption through white man’s burden. Hamm plays a baseball agent who loses his best client, and decides to travel to India to find the first Indian pitchers he can bring back. Nevermind that the two players he eventually finds never established careers in the states, or that their lives were extremely difficult. As long as Jon Hamm is happy at the end, the film can conclude on a positive false note.

Here’s how the cultural exchange works in Million Dollar Arm: India gets a reality-TV-style competition that ends, in the best-case scenario, with two kids cast into the uncertainty of the major-league farm system, half a world away from home. The Americans get their faltering business revived, and J.B. comes to understand the importance of family from his young charges. If it weren’t already clear enough that this inspirational narrative serves him more than them, there’s actually a scene where Dinesh and Rinku serve J.B. a romantic dinner. Other than pining for home on occasion, the Indian athletes are simpletons whose innocence and decency cover up a lack of any interior life — shades of Michael Oher in The Blind Side – while J.B.’s story is the one with the true heartwarming arc.

Million Dollar Arm is cute, cloying, simplistic, borderline offensive … and thoroughly effective. The fact-based story of a desperate sports agent who recruits two cricket playing kids from India and tries to mold them into Major League Baseball prospects, it has all the subtlety and grace of a Norman Rockwell finger painting. But it may still have you dabbing tears by the end. You’ll probably hate yourself for liking it. I know I did.

The film only pulled in a little over $10 million, less than half of Neighbors.