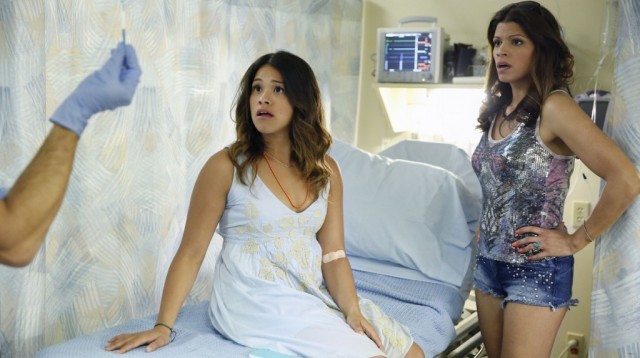 Golden Globe television nominations are officially in, and as has sometimes been the case in past years, the Hollywood Foreign Press Association showed particular love to the new kids on the block. Several freshman series earned unexpected nominations over other already established favorites, as did some of their stars.

The Best Comedy category held the most surprises, with first-timers bumping longtime frontrunners completely out of the running. Though recent awards seasons have been dominated by ratings juggernauts Modern Family and The Big Bang Theory, both comedies failed to receive recognition in this year’s nominations, as did last year’s winner, Fox’s Brooklyn Nine-Nine. Instead, new shows from both The CW and Amazon were thrown into the mix.

The former’s telenovela-style series Jane the Virgin – which has been earning rave reviews since its October debut — nabbed a nod, as did the streaming service’s critical darling, Transparent. The final three spots went to another surprising first-time contender, HBO’s Silicon Valley, the newly categorized comedy Orange Is the New Black, and Girls — which, notably, means that that four of the five contenders in this category are female-driven shows.

Jane the Virgin also earned a well-deserved nomination in the comedy actress category, with star Gina Rodriguez holding rank alongside Orange Is the New Black’s Taylor Schilling, Veep’s Julia Louis Drefyus, Nurse Jackie’s Edie Falco, and Girls’ Lena Dunham. Shockingly, other favorite comedy stars like Parks and Recs’ Amy Poehler (who won in this category last year), The Comeback’s Lisa Kudrow, and The Mindy Project’s Mindy Kaling weren’t nominated, despite the fact that many critics predicted the category would fall in their favor.

Rodriguez wasn’t the only lead of a freshman series to nab a nomination. In the Best Actor category, Jeffrey Tambor of Amazon’s Transparent was honored for his acclaimed performance, alongside the nominations of Louie’s Louis CK, House of Lies’ Don Cheadle, Derek’s Ricky Gervais, and Shameless’ William H. Macy. Tambor. Combined with Transparent’s nod for overall comedy series, this is a big deal for Amazon, which — until Thursday’s announcements — had yet to break through as an awards contender like fellow streaming company Netflix.

The drama categories also included a formidable new competitor in The Affair. The Showtime show earned two nominations: one for Best Series, alongside past candidates Downton Abbey, Game of Thrones, The Good Wife and House of Cards; and one for star Ruth Wilson, who joins House of Cards’ Robin Wright, The Good Wife’s Julianna Marguilles, Homeland’s Claire Danes, and another first-timer in How to Get Away With Murder’s Viola Davis.

Notably missing from each category? Mad Men, Homeland, and Scandal weren’t nominated, and neither was Scandal star Kerry Washington (who also failed to nab a SAG nomination), or Orphan Black’s Tatiana Maslany (who earned a SAG nod earlier this week and was nominated at the Globes last year).

In comparison to the TV nominations, the movie and miniseries categories held relatively few surprises, with one notable exception: Starz’s The Missing nabbed a nomination alongside The Normal Heart, Olive Kitteridge, True Detective, and Fargo, knocking American Horror Story: Freak Show out in the process. The Missing’s Frances O’Connor earned her own nomination, alongside The Honorable Woman’s Maggie Gyllenhaal, Freak Show’s Jessica Lange, Olive Kitteridge’s Frances McDormand, and Fargo’s Alison Tolman, and over The Normal Heart’s Julia Roberts, who was snubbed against award pundits’ predictions.

Amy Poehler and Tina Fey will host the 2015 Golden Globe Awards, which are scheduled to air on January 11.