‘Gotham’: How Doubling Down on Villains Helped the Show 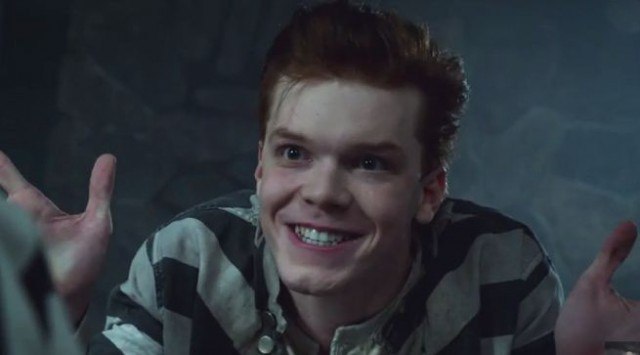 Through its early run, it’s been difficult to quite pin down what FOX’s Gotham is trying to be. The Batman narrative we’ve become accustomed to typically includes… well, Batman. Instead, we have a show ambitiously committed to showing us the Dark Knight’s universe sans its titular hero. No one can deny that it’s trying with ever fiber of its being to provide something completely different, but for the most part it’s seen scattered results in this mission. There’s something inherently boring about Gotham City without Batman patrolling the streets at night.

Somehow though, Season 2 has managed to throw us all for a loop. While Robin Lord Taylor’s Penguin was the sole highlight of the first season, Cameron Monaghan has proven himself to be the the heir apparent as Jerome, the proto-Joker. From his terrifying cackle to not-so-subtle hints dropped throughout the season, it became clear early on that this would be the long-awaited origin story of the most iconic villain in DC’s entire comic universe. Or so it seemed.

The last episode proved that even Gotham has a few tricks up its sleeve (spoilers ahead). The climax marked a massive turning point that none of us saw coming, killing off Jerome, and hereinafter ending the proto-Joker narrative. In the closing moments, we see flashes of people watching a newscast of Jerome’s brief yet horrific reign of terror, each of them laughing maniacally to themselves. This in turn pushed forward the idea that the Joker has no true origin, and that any (or all) of the those people would assume the mantle Jerome created for them. It’s a clever twist on a show that in the past has lacked cleverness, all delivered in a tone more reminiscent of the cheesier Adam West Batman series of the 1960s.

Despite its many flaws, Gotham has succeeded monumentally in beating back the predominant narrative of the modern Batman. Christopher Nolan’s Dark Knight trilogy sent Bruce Wayne down a dark path that’s now seen as the norm. FOX’s Gotham runs in the exact opposite direction of this, doubling down on cheesy acting, over-the-top villains, and dialogue that sounds like it was ripped straight from the pages of a vintage 1960s Batman comic book. And because it’s not canonically linked to DC’s movie universe, the show can quite literally do anything it wants.

Even with all this, it’s worth clarifying a few things. Up until very recently, Gotham has proven difficult to stick with. A “Batman sans Batman” universe can only carry itself so far without the hero that defines it, and Season 1 of the show more than confirmed this. Season 2 has gotten stronger as it doubled down on the more ridiculous aspects of its unique world, but there will always be that core limitation the caps the potential for the series long term.

This all came to a head with the recent midseason premiere, debuting two more members of Batman’s Rogues Gallery. First, we got Hugo Strange, played by B.D. Wong, marking the first time the character had ever been portrayed in a live action medium. Next up was Victor Fries (Mr. Freeze), stepping in as the “murderer of the week,” while teasing at bigger things to come. The second half of this season as aptly been dubbed “Wrath of the Villains,” as the network doubles down on origin stories from the latter side of the “good and evil” aisle.

The twist with Jerome, as well as the introduction of Strange and Fries, represent high points of a show that hasn’t had many of those over its brief run. In the Joker’s case, it was a clever way to provide an origin story for a villain who canonically doesn’t have one, accomplishing this surprisingly well. A wrench was thrown into the works when Jerome was subsequently killed off, but odds are we still haven’t seen the closing chapter of the Joker. Now that Gotham is moving forward with new villains, we’re left to see if that can breathe some life into the much-maligned story. Does the fledgling series have another big surprise left in it? We hope so.