10 Greatest Zombie Movies Ever Made 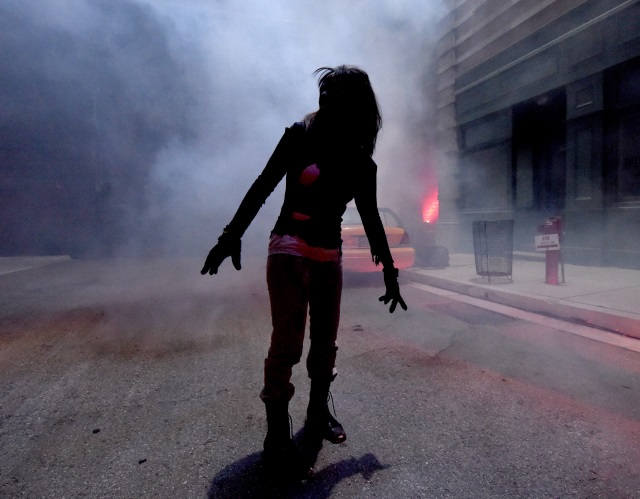 It seems that zombies can be found almost everywhere lately. From films and television to video games and flash mobs, they have staggered their way into every nook and cranny of our culture. Some of us have even speculated which vehicles might help us best survive a zombie apocalypse. Over the past few years, AMC has capitalized on the undead trend with its hit cable television show, The Walking Dead, and a spinoff of that show — Fear the Walking Dead.

Meanwhile, major Hollywood stars like Brad Pitt have further popularized the genre with big-budget films like World War Z. While this horror subgenre dates back to at least the 1930s with classics like White Zombie, starring Béla Lugosi, the modern film portrayal of zombies was first brought to life by George Romero’s 1968 masterpiece, Night of the Living Dead.

Although the “walking dead” in Romero’s movie are never referred to as zombies, Night of the Living Dead provided the template for zombie behavior in many subsequent films in the genre. While some zombie flick aficionados might argue that the horror provoked by Night of the Living Dead will never be topped, here are 10 other awesome zombie flicks that might keep you up all night.

Renowned Italian horror director Lucio Fulci has developed a well-deserved reputation for filling his films with over-the-top gore, but he may have outdone himself with this cult zombie flick. In the film, a young New Yorker named Liza (Catriona MacColl) moves to Louisiana in order to reopen the Seven Doors Hotel that she recently inherited. Unfortunately for her, the hotel contains a portal to hell that lets zombies enter the land of the living.

As with many Fulci films, The Beyond doesn’t have much of a coherent plot. Instead of a comprehensible story, the movie relies on its stomach-churning special effects to keep viewers on the edge of their seats. That being said, some of the deaths that Fulci dreams up for this movie’s characters are so outrageous that they almost make up for the nonsensical plot. In other words, if you’re into eye-gouging, spider-chomping, acid-burning zombie movies, then The Beyond may be right up your alley.

Pioneering horror director Wes Craven tried his hand at the zombie genre with this movie that is very loosely based on an ethnobotanist’s book of the same name. In the film, Harvard University-trained ethnobotanist Dennis Alan (Bill Pullman) travels to Haiti to investigate a drug that voodoo practitioners supposedly use to create zombies. Despite being warned repeatedly to leave the country by an evil witch doctor (and a member of Haiti’s feared paramilitaries, the Tonton Macoutes) Alan persists in his inquiries, leading to increasingly terrifying threats.

One of the most unique features of The Serpent and the Rainbow is that its story incorporates elements of Haitian folklore. Most zombie movies are completely disassociated from the original mythology of zombies and tend to substitute pseudo-scientific reasons for zombies’ existence, rather than magical voodoo traditions. For zombie movie fans who are interested in seeing a more “realistic” depiction of zombies, The Serpent and the Rainbow is a great place to start.

Perhaps the greatest comedy zombie film ever made (sorry, Shaun of the Dead), Cemetery Man is an Italian-French-German production about the caretaker of a cemetery that inexplicably turns everyone who is buried there into zombies. In the film, Francesco Dellamorte (Rupert Everett) lives a lonely existence at the cemetery with his mentally-handicapped assistant Gnaghi. The monotony of his life is only broken up by his main occupation: shooting the reanimated corpses that inevitably arise after someone is buried in the cemetery.

With its combination of comedic, tragic, and horror elements, Cemetery Man is a hard film to classify, which may have contributed to its lackluster reception in the U.S. Though the film received mixed reviews upon its release, it does have some notable defenders, including director Martin Scorsese, who called it one of “the best films of the 1990s,” as noted in the book Comedy-Horror Films: A Chronological History, 1914-2008 by Bruce G. Hallenbeck.

This low-budget indie film from director Jeremy Gardner proves that you don’t need a lot of expensive special effects in order to craft an intriguing zombie film. Much like AMC’s zombie drama The Walking Dead, The Battery focuses on the emotional and psychological toll that the survivors experience in a world overrun by the undead. In the film, two ex-baseball players wander through New England scavenging for supplies and butting heads over how best to survive.

Ben (Jeremy Gardner) is the more pragmatic of the two and has quickly adjusted to the demands of their new lifestyle. On the other hand, Mickey (Adam Cronheim) is reluctant to adapt and spends his time listening to music on headphones. Winner of several festival awards, The Battery may be the perfect zombie movie for people who don’t typically like zombie movies.

After earning his horror movie directing chops with the cult vampire movie From Dusk till Dawn, Robert Rodriguez returned to the genre with this 2007 zombie-themed flick. In the film, an experimental biochemical weapon is released on a nearby Texan town, causing a zombie epidemic that soon spirals into an all out war between the infected and the survivors. The impressive ensemble cast includes Rose McGowan, Freddy Rodriguez, Josh Brolin, Jeff Fahey, Michael Biehn, Bruce Willis, and many more.

Although this 2009 Norwegian zombie film sometimes takes a turn into campy comedy territory, it also offers several original twists on the classic zombie horror story. In the film, a group of friends gather in a cabin to prepare for an enjoyable weekend of skiing. However, it’s not long before the friends are fighting for their lives as they battle a group of murderous Nazi zombies.

Unlike many other contemporary zombie films, Dead Snow portrays zombies as a supernatural problem. The film also adds an extra dimension of horror with the Nazi association. Although the film has many comedic elements, it features enough impressively gory special effects to keep any zombie film fan up at night. Fans of Dead Snow will also be glad to hear that a sequel, Dead Snow: Red vs. Dead has already been made.

The 2007 film starring Will Smith is the latest zombie flick to draw inspiration from Richard Matheson’s novel of the same name. The 1954 horror novel also inspired 1964’s The Last Man on Earth with Vincent Price, as well as 1971’s The Omega Man, starring Charlton Heston. According to CinemaBlend, George Romero also credited Matheson’s book as the inspiration behind Night of the Living Dead.

Like 28 Days Later, I Am Legend explores the idea that a zombie outbreak was caused by a virus. In the film, Smith plays a doctor who lives in a post-apocalyptic New York City, where it appears that everyone else has been transformed into zombie-like monsters. I Am Legend is imbued with an atmosphere of suspense as Smith’s character slowly begins to realize that he may not be alone.

Released in 2002, 28 Days Later puts a scientific spin on the classic zombie story by presenting zombies as victims of a viral outbreak. Unlike most other zombie flicks, 28 Days Later also featured fast and agile zombies in contrast to the typical slow and shuffling brain-munchers normally depicted on-screen.

In the film, a hospital patient named Jim wakes up from a coma to discover a virtually deserted London. After encountering some hostile and fast-moving zombies known as the “infected,” Jim eventually teams up with several other survivors, including a group of former soldiers. Like many other zombie films, 28 Days Later explores the theme of how a zombie outbreak brings out the worst and best traits in the survivors. The film was a commercial success and led to a sequel, 2007’s 28 Weeks Later.

Also known as Zombi 2, Zombie may be Italian director Lucio Fulci’s greatest contribution to the zombie film genre. Romero’s Dawn of the Dead was released in Italy with the title of Zombi and in true B-movie fashion, Fulci tried to capitalize on the popularity of Romero’s movie by naming his 1979 film Zombi 2. Despite the attempt to piggyback on Romero’s work, Fulci’s movie bears little resemblance to any of Romero’s films.

In the film, the discovery of an abandoned yacht with a zombie on board leads a group of people to visit an island where a doctor is studying a strange disease that causes the dead to come to life. Needless to say, the trip does not end well. Fulci’s film is characterized by extreme gore and some of the most bizarre zombie battles ever committed to film, including an infamous underwater zombie versus shark scene. Although Zombie is not nearly as well-known as many other zombie films, the movie has gained a strong cult following over the years.

Dawn of the Dead is the first — and some would argue the best — of George Romero’s many follow-ups to his highly successful Night of the Living Dead. The film is set in a shopping mall where survivors of the spreading zombie plague have taken refuge as the world outside becomes increasingly chaotic. Unlike the low-budget black-and-white original that had few special effects and simple makeup, Dawn of the Dead featured impressive amounts of gore, courtesy of renowned special effects artist Tom Savini.

Much like he did in his original film, Romero used Dawn of the Dead as a vehicle for critiquing society’s contemporary problems. Many critics have interpreted the scenes featuring zombies staggering through a shopping mall as a not-so-subtle critique of mindless American consumerism. Although Romero would go on to create four more sequels, many zombie film buffs consider Dawn of the Dead the strongest of the series. The film gained a new generation of fans when Dawn of the Dead was remade by director Zack Snyder in 2004.