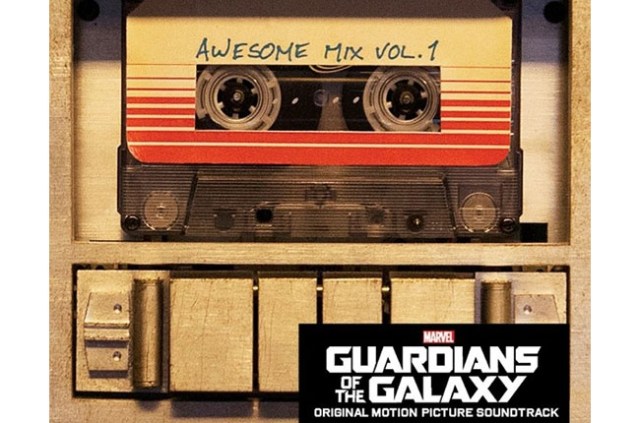 Guardian of the Galaxy’s Star-Lord (Chris Pratt) doesn’t go anywhere without his music, and it looks like audience members are following suit. The movie’s soundtrack has officially reached No. 1 on the Billboard 200 charts, becoming the second film soundtrack to top the charts this year.

Per Billboard, the album climbed two spots after selling 109,000 copies in the week ending August 10 — about 83 percent higher than the 60,000 copies it initially sold during its debut week. The soundtrack is subtitled Awesome Mix Vol. 1, (a name taken directly from the film.) As those who have seen Guardians of the Galaxy in theaters know, the tape plays an important role to the movie’s plotline and protagonist. Pratt’s character, Peter Quill, listens to it repeatedly throughout the film and at one point, even risks his life to retrieve the tape, which was given to him by his late mom.

This is actually the second soundtrack from Disney Music Group of 2014 to reach No. 1 on the charts. The first was Frozen, which has remained in the Top 10 for an impressive 35 straight weeks. The album’s ascent to the top marks the first time since 2009 that multiple soundtracks have reached No. 1. That year, three soundtracks reached the top spot: Hannah Montana: The Movie, The Twilight Saga: New Moon, and Michael Jackson’s This Is It.

But what makes the album’s success even more noteworthy? It’s the first time that a soundtrack containing no new songs has reached the No. 1 songs. All of the 12 songs on the CD (11 of which are featured in the film) are previously released tunes from the ‘60s and ‘70s, such as Blue Swede’s “Hooked on a Feeling,” Jackson 5′s “I Want You Back,” and Marvin Gaye and Tammi Terrell’s “Ain’t No Mountain High Enough.”

Perhaps the soundtrack’s unexpected success shouldn’t be too much of a surprise, considering that the Guardians of the Galaxy movie itself also surpassed expectations. The movie has raked in over $319.1 million worldwide since its August 1 debut and earned widely positive reviews from both critics and audiences alike. Still, it seems director James Gunn couldn’t help but be surprised and amused by the news. “All those days as a child I spent locked in a room listening to AM radio were not wasted!” he joked on his Facebook page.

Meanwhile, last week’s No. 1 album, Tom Petty and the Heartbreakers’ Hypnotic Eye, dropped to No. 6, moving 34,000 copies. Eric Clapton’s all-star tribute album, The Breeze: The Appreciation of JJ Cale, takes the No 7. spot, followed by the Frozen soundtrack and Sam Smith’s In the Lonely Hour. The debut EP from UK pop band’s The Vamps, entitled Somebody to You, rounds out the Top 10.