What the ‘Guardians of the Galaxy Vol. 2’ Characters Are Supposed to Look Like

They are the guardians of the galaxy, but they don’t always look the same. With comic book adaptions that have gone through many changes over the years, the look of characters can change dramatically. But they’re still the same goofy heroes we know and love.

With the release of Guardians of the Galaxy Vol. 2, we have a few new costumes, as well as some new faces to add to the roster. Here’s how the main players in the Marvel Cinematic Universe film compare to their source material. 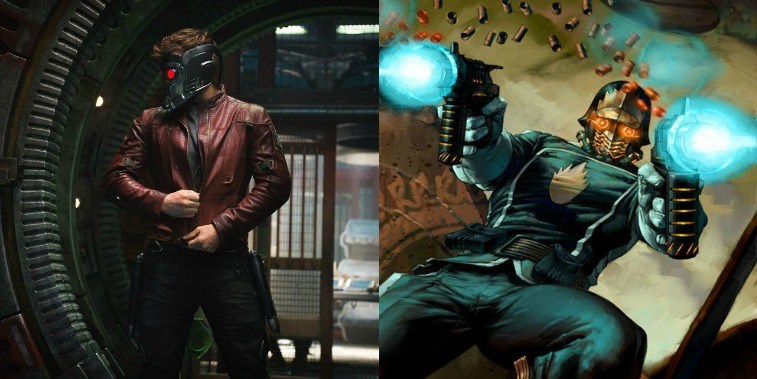 Peter Quill, the Earth-born leader of the Guardians, has had many different looks in the past. According to The Mary Sue, the character has worn a helmet and gone mask-less, but his uniform has generally remained some shade of blue.

But Chris Pratt’s film uniform is a bit simpler: He dons his signature red leather duster, black pants, and usually a plain T-shirt. We do see him wear a long-sleeve shirt with a brand in an unknown language, which Pratt himself believes is likely some kind of candy from another planet in the galaxy. 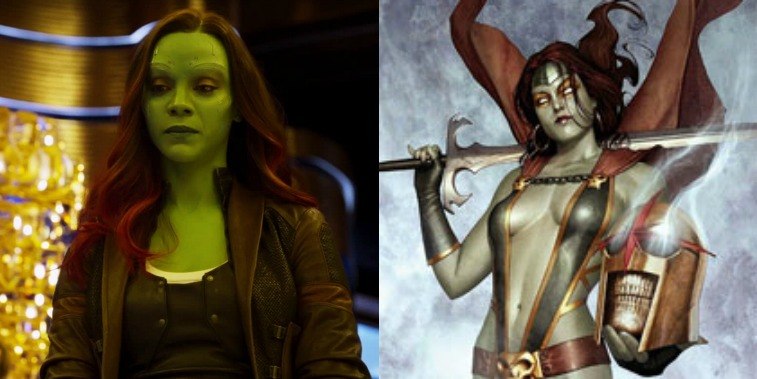 The Deadliest Woman in the Universe has always worn a skin-tight uniform. This is typically some type of jumpsuit, showing varying degrees of cleavage and leg.

Like many iterations in the comics, the MCU’s Gamora is dressed in black, but the iteration finally allowed her to sport something a bit more comfortable. Actress Zoe Saldana wears a couple of different outfits throughout the film, all featuring the character’s trademark black leather.

Gamora always has a green skin tone, but her hair color changes. 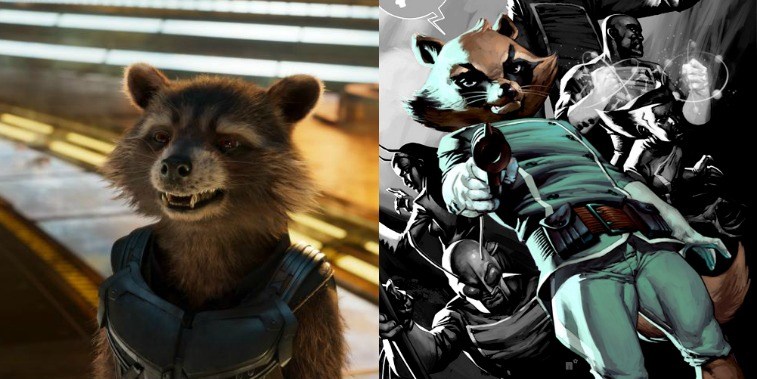 Rocket in Guardians of the Galaxy Vol. 2 | Marvel Studios, Rocket Raccoon, from the cover of Annihilation: Conquest – Star-Lord #2 | Art by Nic Klein for Marvel Comics

Strangely enough, this talking animal character was inspired by The Beatles’ song, “Rocky Raccoon.” Rocket hasn’t changed a lot over the years — the design of the raccoon has become less cartoony and more realistic, and there’s little consistency in the armor he wears, but his general look is the same.

The MCU version of the character allows for an even more true-to-life depiction of the animal, but interestingly, Rocket denies his origins. This allows for a deeper character arc, as a sentient creature who has been tortured in order to become what he is today. 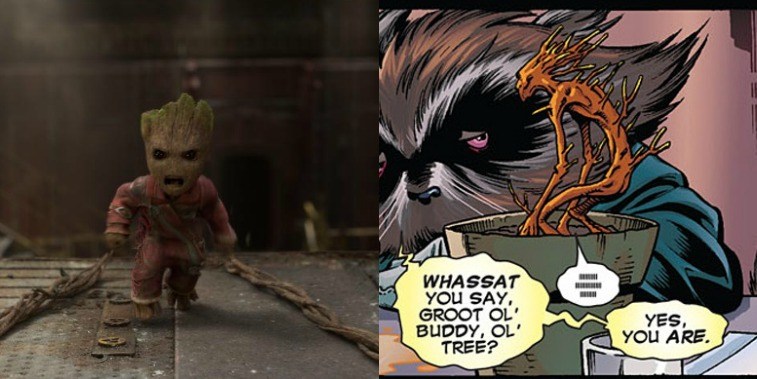 Many fans of Guardians of the Galaxy were delighted to see that Groot was appearing in the sequel in his reborn form, deemed Baby Groot. And the adorable tree does not disappoint.

The Groot from the comics is more daunting than the character in the film. The sapling version of him has typically been less like a cute little tree and more like a spindly twig. 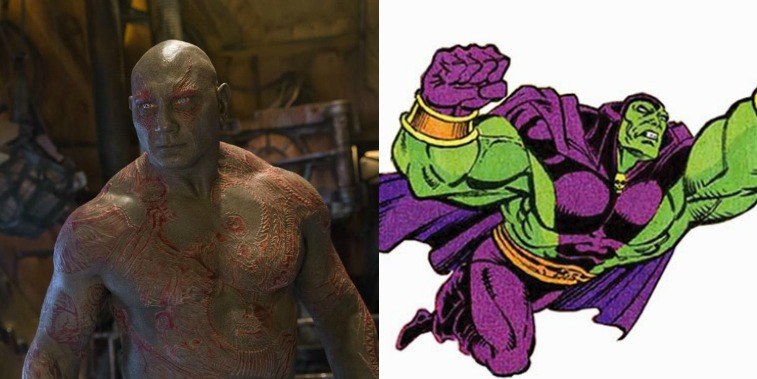 One thing is consistent about Drax the Destroyer: he’s always large and muscular. Drax is a green color and, in later iterations, is covered in red tattoos, just as actor Dave Bautista is in the films.

His early costume is a bit different, too. In red or purple, he wears pants, boots, and a cape, which often connects to his pants at his large belt buckle. However, later versions see him looking much like the MCU Drax, wearing just pants and boots, along with a utility belt for his swords. 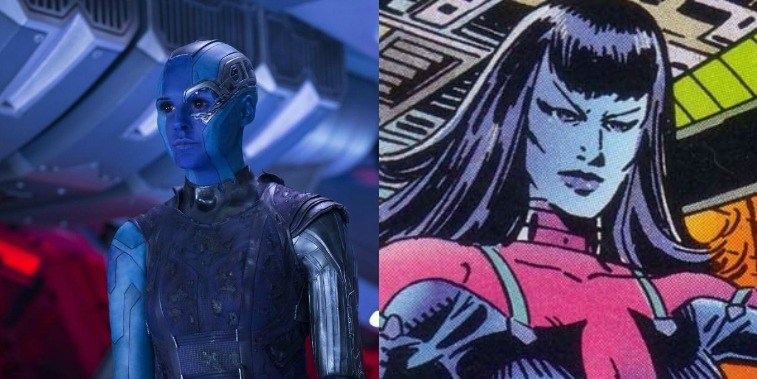 Nebula in Guardians of the Galaxy Vol. 2 and Nebula in the comics | Marvel

This is one character that has actually had a fairly straightforward evolution. Nebula, sort-of sister of Gamora and daughter of Thanos, is an alien who has been enhanced with various mechanical body parts. And whether she’s in the comic world or the MCU, she’s had it rough.

The print version of Nebula originally wears a blue and red costume, has blue skin, and sports long, dark hair. As for the film version of Nebula, she has a more stripped-down, machine-like look. She is two shades of blue, and has no hair to speak of. Nebula’s comic costume consists of a reddish-purple jumpsuit, comparable to that of the comic iteration. 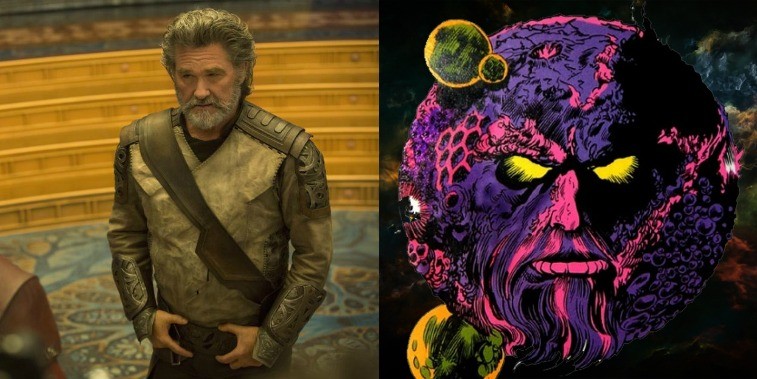 Kurt Russell as Ego in Guardians of the Galaxy Vol. 2 and Ego the Living Planet in the comics | Marvel

As we quickly discover in Vol. 2, Ego is Peter Quill’s father. His human form is simply that of actor Kurt Russell, with a gray beard and a thick head of hair. But once we discover what he truly is, we are able to see the real Living Planet.

The Ego of the comics usually resembles his planet form in some way, but he always reverts back to a giant, menacing face akin to the man in the moon, with craters and glowing eyes. 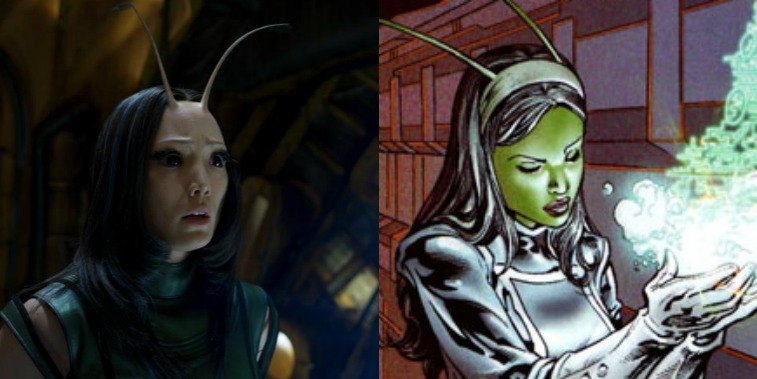 Mantis in Guardians of the Galaxy Vol. 2 | Art by Tom Raney for Marvel

There have been many different iterations of Mantis in the comics, and she has even had several different names. The Vietnamese-German character is usually defined by her antennae, though they are sometimes depicted more symbolically. She is also often green in skin tone, and has dark hair. Her costume is typically green and yellow.

Like her print counterpart, actress Pom Klementieff has both European and Asian ancestry. Her character is flesh colored, as are her antennae, and she has large, dark eyes and long, black hair. Like the comic, her outfit is green, though it’s a very dark shade, with black accents.

Overall, Mantis has evolved without drifting too far from the source material. 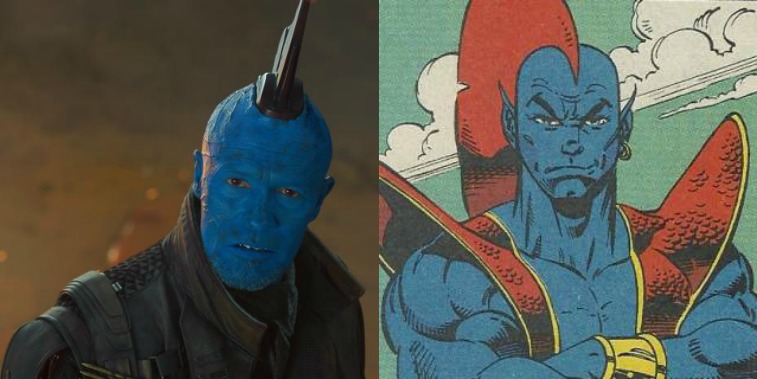 Yondu in Guardians of the Galaxy Vol. 2 and in the comics | Marvel

Here’s another character who was given a bit more depth (and clothes) in Vol. 2. Yondu appeared in the first Guardians film as a low-level bad guy of sorts: He’s the reason that Star-Lord met his new friends, but he also demanded the power stone at the end of the movie (luckily, Quill tricked him).

The Yondu of the comics dressed in a barely-there costume, but he has more in common personality-wise with the Yondu we see in Vol. 2. The tough-yet-empathetic leader wears a much more substantial dark outfit, and we learn more about his signature red fin. Actor Michael Rooker gives the blue alien both an edginess and a warmth that’s unexpected. 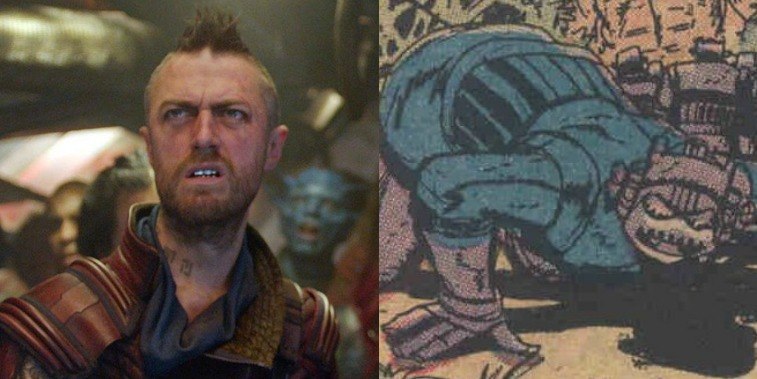 Sean Gunn as Kraglin in Guardians of the Galaxy | Marvel Studios, Kraglin in Tales to Astonish #46 | Marvel Comics

Some of the characters have deviated drastically from their origins. Kraglin, Yondu’s first mate, is portrayed by actor Sean Gunn (brother of director, James Gunn), in the films. He’s very human-looking, with no distinctly alien features to speak of.

But Kraglin in the comic book world is another story entirely. He only appears in one issue, “Tales to Astonish #46,” opposite Ant-Man and the Wasp. This Kraglin is strictly on the side of evil, and doesn’t remotely resemble a person. 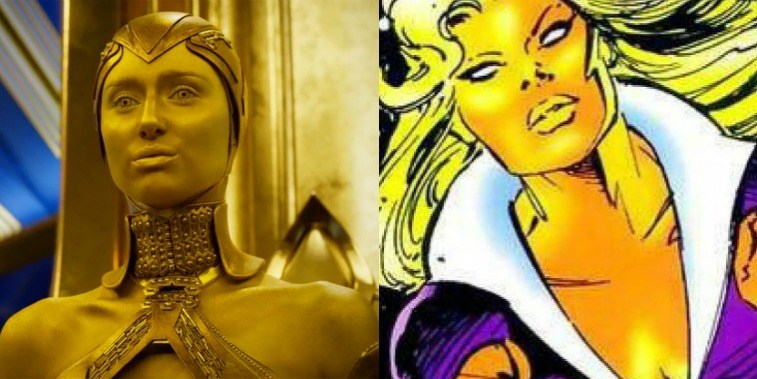 Ayesha in Guardians of the Galaxy Vol. 2 and in the comics | Marvel

Mysterious Ayesha, the High Priestess of the Sovereigns, enters the film early, but little is resolved in terms of her conflict with the Guardians. She and her people are gorgeous, human-like beings, with one main difference: they and their clothes are gold from top to bottom.

In the Marvel comics, Ayesha is a beautiful gold being, but she’s much more complex than we’ve seen so far in the MCU. She has gone by a few different names, including Her and Kismet. Regardless of her name, comic book Ayesha usually has long blond hair and wears a skimpy red costume. 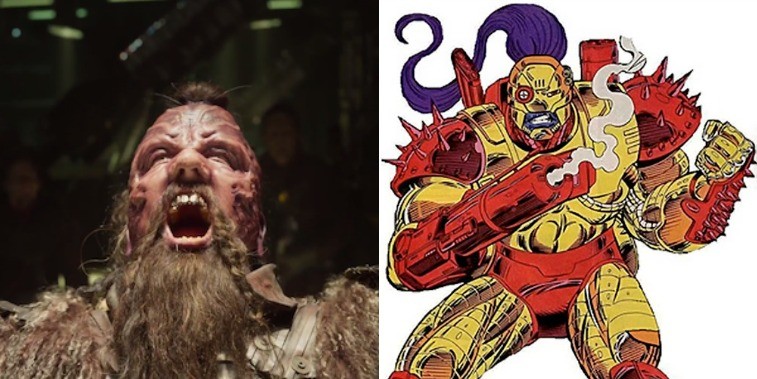 Taserface, now known in comic world as Overkill, is actually part of an alien race called Stark, after — you guessed it — Tony Stark. This may be what lead to his red and yellow costume, which is vaguely similar to that of Iron Man’s. His skin color appears to be blue and he has a long ponytail of purple hair.

MCU Taserface is similar in essence to the print version, but a little less dramatically colored. Actor Chris Sullivan sports neutral-toned gear, and his thick beard and eccentric mohawk are a natural brown. Of course, Taserface’s face is where his most distinct features are: His teeth are pointed and capped, much like some of the Ravagers. And his skin has a bland base tone, but is accented with purple surrounding his bulging veins. 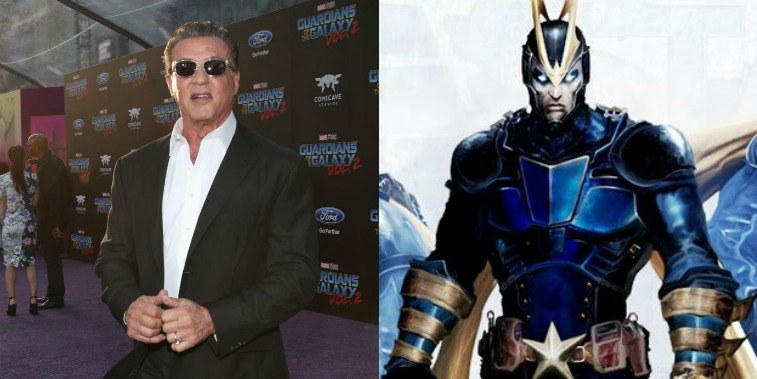 Sylvester Stallone on the red carpet for Guardians of the Galaxy Vol. 2 | Rich Polk/Getty Images for Disney, Image of Starhawk from the comic | Art by Clint Langley for Marvel

Until the premiere of Guardians of the Galaxy Vol. 2, Sylvester Stallone’s character was kept relatively under wraps, as were all images of him on set. After critics had seen the film, however, the cat was out of the bag: Stallone plays Starhawk, a highly respected Ravager who doesn’t seem to get along with Yondu.

In the comic universe, Starhawk, also known as Stakar, is an immensely powerful being, rocking a typical superhero get up in blue and yellow. In the film, Stallone is dressed in fairly bland clothing, sporting a more serious look. While it would have been hilarious to see the famous actor dressed up in a spandex suit, we think it’s much more appropriate for the MCU Guardians for him to appear casually human.