‘Guardians of the Galaxy Vol. 2’: Who Is Ego the Living Planet?

Guardians of the Galaxy Vol. 2 will introduce a slew of notable new characters, but perhaps the most fascinating of the upcoming additions is that of Peter Quill aka Star-Lord’s father. Though his otherwordly identity was hinted at in the original film, it’s since been confirmed that the mysterious paternal figure happens to be the cosmic entity, Ego the Living Planet.

The peculiar character will be played by Kurt Russell in the film and while specifics about his introduction remain unknown, fans don’t have to wait for the movie’s premiere to learn more about him. Here’s everything you should know about Ego, before the release of the Marvel sequel: 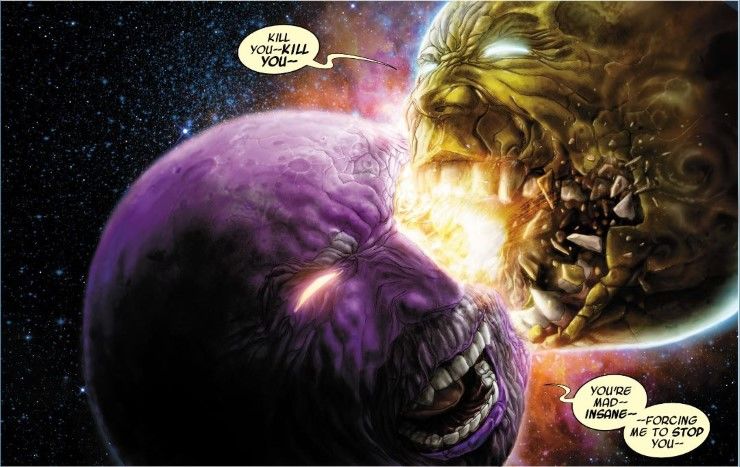 Ego is a planet imbued with a sentient consciousness who hails from the large-scale nebula known as the Black Galaxy.

The story of how Ego the Living Planet came to be is complex enough that even Ego himself can’t keep track. The character, who made his debut in Thor Issue 132, once explained his own creation as the result of a scientist’s body and mind merging with a planet when its sun went supernova. But that’s not exactly accurate.

Years after his introduction, Ego learns that he and his twin brother Alter Ego were actually created by the Stranger, a powerful and ancient cosmic who was eventually revealed to be one of the “Elders of the Universe.” The Stranger planned to raise Ego and Alter Ego separately and then have them battle each other in order to see who was stronger. But things don’t go exactly as planned and Alter Ego eventually becomes a permanent moon in Ego’s orbit, allowing the two to travel together as a family. 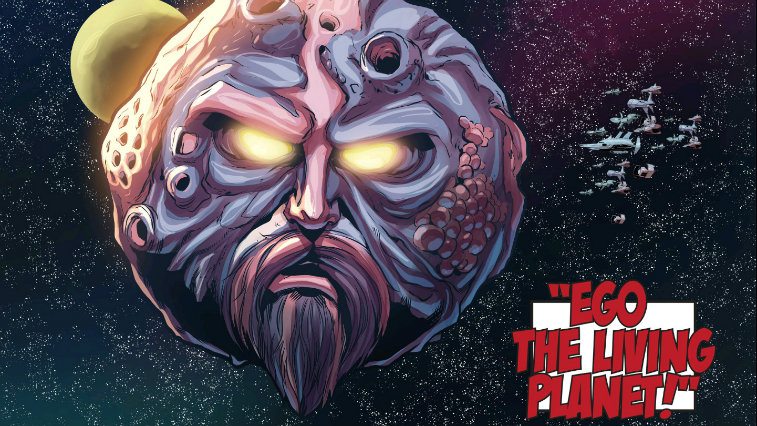 In addition to being exceptionally intelligent, Ego’s abilities include total control over his own mass down to the molecular level — meaning he can shape and alter the look of his own terrain as necessary. He can also heat up his own internal temperature to destroy beings and possesses powerful digestive organs that can absorb other living beings. Aside from having human facial features, his internal features are also comparable to that of a living organism, including artery-like tunnels and a gigantic brain-like organ deep below his surface. 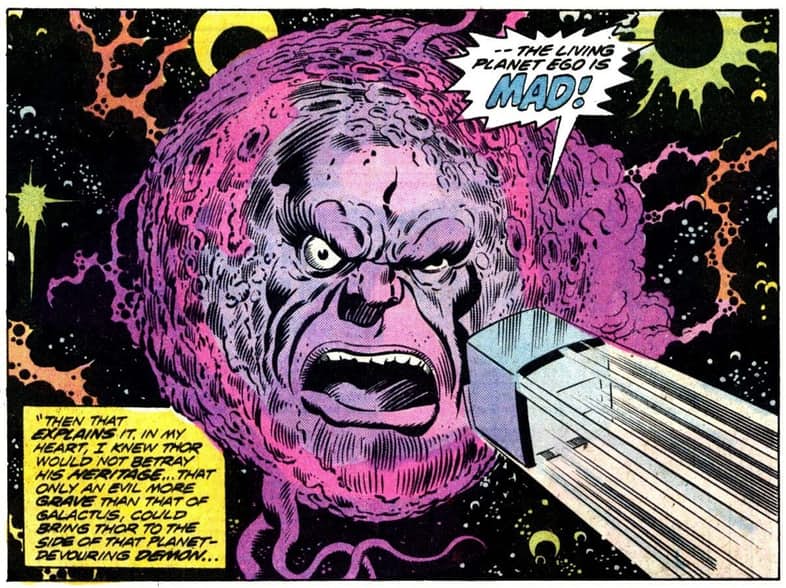 In his early comic book appearances, Ego attempted to conquer other worlds, only to be stopped by the God of Thunder himself, Thor. Left humiliated by his defeat, Ego renounces his plans and vows never to leave the Black Galaxy.

The Living Planet and the Asgardian god cross paths again several months later, when Galactus — a cosmic entity who originally consumed planets to sustain him — looks to strengthen himself by consuming Ego. Thor once again intervenes, this time to save Ego. In return, Ego allows his surface to become the new home of the Wanderers, a group of various alien races whose planets had been the very first to be devoured by Galactus billions of years ago. 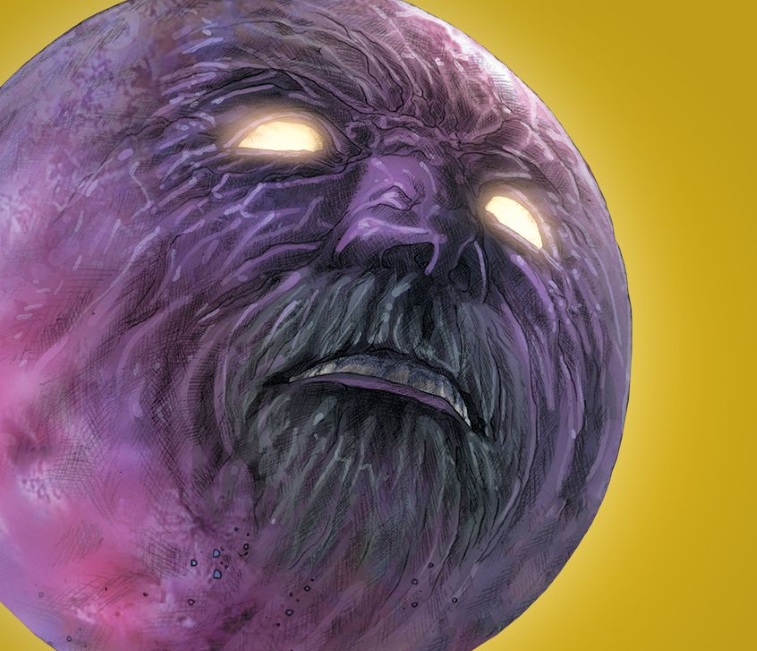 Ego resurfaces in the canon in the 1970s when an alien named Tana Nile steals a part of his mass with the idea of creating her own living planet. The act drives Ego insane and he ends up consuming the Wanderers, the very people he was playing home to. Seeing this, Thor teams with Galactus, Hercules, and Firelord to attach a massive engine to Ego that will propel him through space and keep him away from other planets.

Ego eventually learns how to control the engine and returns in the 1980’s storylines to seek vengeance, only to become embroiled in battle with the Fantastic Four. Throughout the decade, he remains an occasional nemesis to everyone from the Spaceknight Rom to the Silver Surfer.

He later joins the Elders of the Universe in a plan to destroy Galactus, he battles Beta Ray Bill, and temporarily takes over the Nova Corps. Most recently, he engaged in a clash with his brother, Alter Ego, that ultimately results in Ego making his sibling a part of his orbit.

Which brings us to …

Guardians of the Galaxy Vol. 2

Russell will take on the character in Guardians of the Galaxy Vol. 2, appearing as Peter Quill aka Star-Lord’s father. How exactly he’ll be introduced remains to be seen, but director James Gunn has stated that he will be seen in human form (reportedly in the above costume), so that he can talk and interact with humans. He also suggested that the movie will explore what it’s like for Ego to be a lone cosmic being who others don’t understand.

As the director wrote in a lengthy Facebook post last summer, “Yeah, his dad is a planet… Sort of. It will all be explained in the film. But to me, this is the absolute center of Vol. 2, and one of the reasons I’ve been so excited about it.”

He also added, “I can’t wait for you guys to see Kurt Russell bring this character to life onscreen. It has been a rapturous experience creating Ego with him. We have both pushed ourselves as far as we can go in making him real, and grounded, and emotionally centered.”

Guardians of the Galaxy Vol. 2 hits theaters May 2017.