There’s no denying it: Prices for text books are absurd. Really, just absolutely ridiculous. What publishers and higher-education institutions, along with the faculty members who often times author the texts have put together is no-less than a racket — and one in which already financially-strapped students ultimately get the short-end of the stick.

The world of college text books has been an area that’s been begging for improvement, or disruption, for quite some time. It’s a closed-system with very little that outside companies have been able to do anything about other than make it easier for students to compare prices, or exchange books. But Amazon has decided to step into the fray, offering on-campus, brick-and-mortar textbook distribution centers at two major American universities. Those schools — Purdue and the University of Massachusetts Amherst — will see a bump of more than $1.5 million in revenue over four years, the Wall Street Journal reports, and students should be able to save more than $400 on an annual basis.

The overall market for textbooks is more than $10 billion yearly, and is by and large controlled by companies like Barnes & Noble and Follett. Amazon obviously sees a market that is desperate for an alternative, and has decided to strike. Students can use their school’s Amazon portal to purchase or order textbooks, giving Amazon yet another front on their apparent goal for world domination.

“We’re excited to open our first-ever staffed pickup location at Purdue, making it more convenient and affordable for students to get everything they need for life on campus,” said Paul Ryder, VP of Media and Student Programs at Amazon, per a report from CNET. “Whether students are ordering textbooks, laptops, or mac and cheese, Amazon and Purdue are now providing a convenient and secure spot for them to pick up their stuff at hours that work with their schedules.” 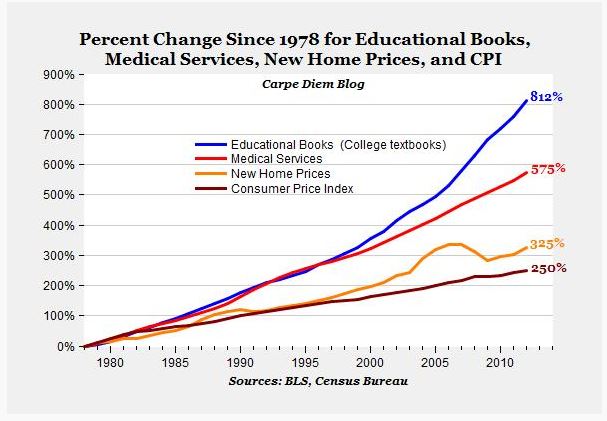 With Amazon invading college campuses, it’s fair to speculate as to why the company has decided to pull the trigger on the on-campus stores now. The simple answer is that there was enough demand to warrant it, as students are consistently feeling ripped off by the current setup and incumbent companies. The chart above, from an American Enterprise Institute study, shows that those students’ feelings are validated, as the price of textbooks has increased 812% since the mid-1970s.

It’s not uncommon for students to be required to purchase textbooks that cost upwards of $200 or $300, the AEI says, and it was only a matter of time before somebody stepped in to try and restore some balance. Amazon is evidently one of those somebodies, as are a few other companies wading into the fight. Though there is evidence that textbook prices are coming down, it hasn’t been enough to stifle growing unrest among students regarding the cost of course materials. A study from the National Association of College Stores from 2012 says that the amount students spent annually in 2012 on textbooks was $655, down from $702 in 2010.

While there are numerous reasons for the stratospheric cost of college textbooks, a 2010 study from the University of Michigan does point out that there has been some effort by states to step in and address the continued rise. “Many states have already proposed and passed similar bills that require changes in order to contain rising costs of college textbooks and to allow students easier access to affordable alternatives,” the study says. “In 2007 alone, more than 85 bills in 27 states dealt with textbook affordability. By the end of 2007, 10 states had enacted laws or resolutions to reduce textbook costs.”

Obviously, that hasn’t been enough to bring the market back to equilibrium. While the textbook industry has been a monopoly of sorts, with very little in the way of alternatives for students, what Amazon is doing is acting as an agent of the market to bring down prices. Of course, this won’t happen overnight, and there’s no guarantee that Amazon won’t jack prices up themselves. But getting another player in the game — which has been largely closed off from outside forces — should result in some benefits for students.