Halle Berry Is a Pregnant Astronaut in New Sci-Fi Series 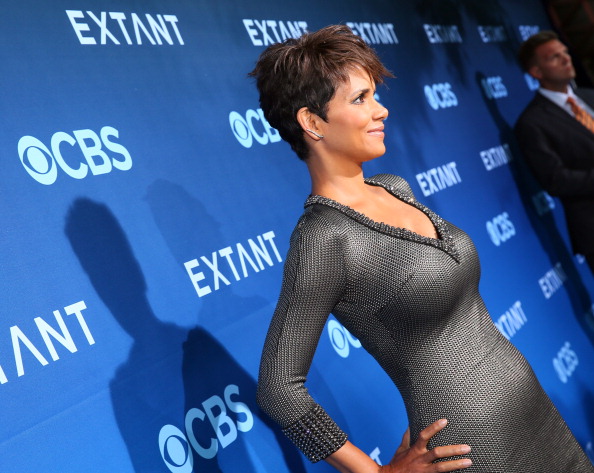 CBS premiered its big-budget new science fiction series starring Halle Berry on Wednesday night. Extant is produced by Steven Spielberg and tells the story of a female astronaut who returns from a 13-month solo mission in space only to find herself mysteriously pregnant after years of infertility.

The show has been getting lots of attention, as Berry is a huge star for a network like CBS to land. Berry plays the astronaut Molly Woods, who is hired by private company to make a solo mission into space. The story hopes to mimic the success of last year’s female astronaut movie Gravity, with a twist of Spielberg’s A.I.

Extant takes place in the not-so-distant future, one with self-driving cars and bathroom mirrors that turn into screens and transparent tablets. The most impressive technology that’s been developed in the intervening years between our present and the show is artificial intelligence. Berry’s husband, John, is a science who works on the technology, and he created the robot that they raise as their son, named Ethan.

“It’s way too soon to say whether this jumble works, but it’s promising that Extant‘s premiere seems confident enough to play it cool and mysterious rather than hammer us with holy-crap moments. Surprisingly for a TV vehicle for an Oscar winner, the pilot doesn’t give Berry a string of showy, actorly moments. Her performance is reserved, bordering on seeming a little shell-shocked, as Molly works on getting her Earth-legs back under her; the show’s direction is quiet and composed,” said a review of the show’s first episode from Time.

Thus far, critics are on the fence about the show’s prospects. It’s not like Berry’s infallible. Her last science fiction effort, the Wachowskis’ adaptation of the David Mitchell novel Cloud Atlas, bombed after being criticized for the use of yellow-face (to be fair, the source material they were working with was an incredibly complicated work to adapt for the screen). Spielberg’s production company Amblin Television is also involved with the CBS science fiction series Under the Dome, which has suffered from poor reviews in its current second season, which means his involvement doesn’t guarantee genius, either.

“Extant is more deft and sophisticated, and Halle Berry is a big star. But, as is the case with Under the Dome, the new series dilutes its own mystique with too many plodding plot devices and stock characters,” said The New York Times.

Berry’s been on a press campaign that included a cute stint on Jimmy Fallon and a funny interview with David Letterman to promote the show. “That was our hope, is to bring more, you know, movie quality work to television. And if we could do that then we would really feel successful,” Berry told Fallon.

Issues that will be addressed as the season progresses include the Woods family’s understanding of their android son Ethan, who John loves like a human but Molly seems more unsure about, as well as figuring out exactly how Molly got pregnant while by herself in space. These aren’t exactly the most original science fiction tropes, but the show is out of the ordinary for CBS, and it harbors some promise as long as it doesn’t tip into Dome-level ridiculousness.