Halloween Puts People in the Mood to Buy a Slipknot Record 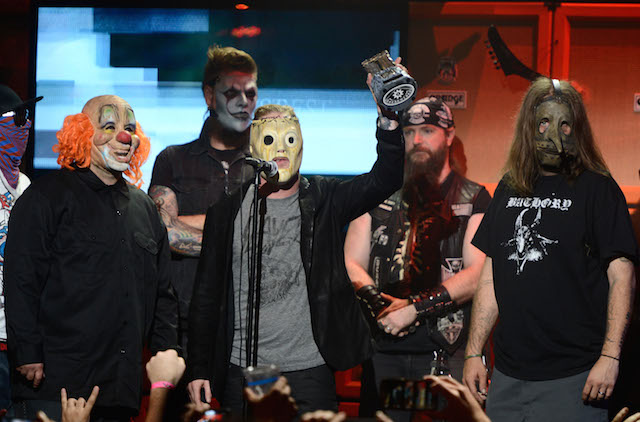 Just in time for Halloween, the spooky metal band Slipknot has scored a No. 1 on the Billboard album charts with its fifth studio album, .5: The Gray Chapter. The album is the group’s first in six years since the death of bassist Paul Gray, to whom the record is dedicated, and the departure of drummer Joey Jordison, but fans seem to think the group has weathered the lineup change just fine, as they bought 132,000 copies, according to data from Nielsen SoundScan seen by Billboard.

Slipknot is known for its creepy and energetic live shows, during which members perform while wearing scary masks and generally look like horror movie villains, making them the perfect band to listen to for Halloween. That season appropriateness plus the diehard fans made the group beat out new records from T.I., Neil Diamond, and Logic. The band’s last album, 2008’s All Hope Is Gone, also debuted at No. 1.

In addition to the signature masks, Slipknot frequently uses gory and creepy imagery in its album artwork and promotion. Shows are a cross between a heavy metal concert and horror performance art, with the band’s seven to nine members stage diving from high balconies, fighting, and even at early shows, lighting each other on fire. NME called one gig “a scene of chaos” and described how the band would smash the stage setup with baseball bats, throw beer barrels, and hang off the elevated drum set.

Frontman Corey Taylor, who also sings in the band Stone Sour, recently sat down with Larry King to discuss the past six tumultuous years for the band and show off his terrifying new mask, which King called “considerably scary.”

Taylor spoke about how Gray’s death from a drug overdose influenced the band and said that Gray would have been proud of the record. “I think he would’ve loved it,” Taylor said. “I mean, it’s essentially the story of the last four years, dealing with the aftermath of his death and all of us trying to kind of get back to a place where we wanted to make music again.” The songs “Skeptic” and “Goodbye” are both directly about Gray, Taylor said.

The band also wanted to use the album to prove that rock and roll music isn’t dead despite a pronouncement from KISS member Gene Simmons otherwise and a struggling music industry where rock albums seem to sell even less than other genres. Despite the fact that .5: The Gray Chapter sold 108,000 copies less than All Hope Is Gone, Taylor still has faith in the genre. “I want it to show that our genre is still very much alive. Obviously, Gene Simmons is very famously quoted as saying, ‘Rock ‘n’ roll is dead.’ I think he’s got a point but at the same time you have to use the new technology to your advantage and I think we are going to show people that you can still use the technology and still have something in rock and roll,” Taylor told King.

Putting the record out just before Halloween helped Slipknot best capitalize on its creepy image and is certainly an argument in favor of the fact that a rock band can still move records even amid competition from other new albums.