Set 30 years after the original film, Blade Runner 2049 follows a new Blade Runner, LAPD Officer K (Ryan Gosling) who discovers a long-buried secret that just might bring the world as he knows it to its knees. During his quest to uncover exactly what went down, Officer K encounters Rick Deckard (Harrison Ford), whom no one has seen or heard from in over three decades.

Ford and Gosling have teamed up 35 years after Ridley Scott’s 1982 film, Blade Runner. The sequel, Blade Runner 2049, is even more stunning and massive than the original. Co-scripted by the original screenwriter, Hampton Fancher, 2049 uses the first film as a foundation to set the stage for a story that is unparalleled in its size and visuals.

From an accidental punch on set to Ford forgetting Gosling’s name in an interview, here’s everything that happened to get Blade Runner 2049 to the big screen, as well as some aspects of the mysterious plotline that we’ve only begun to untangle.

There almost was no sequel 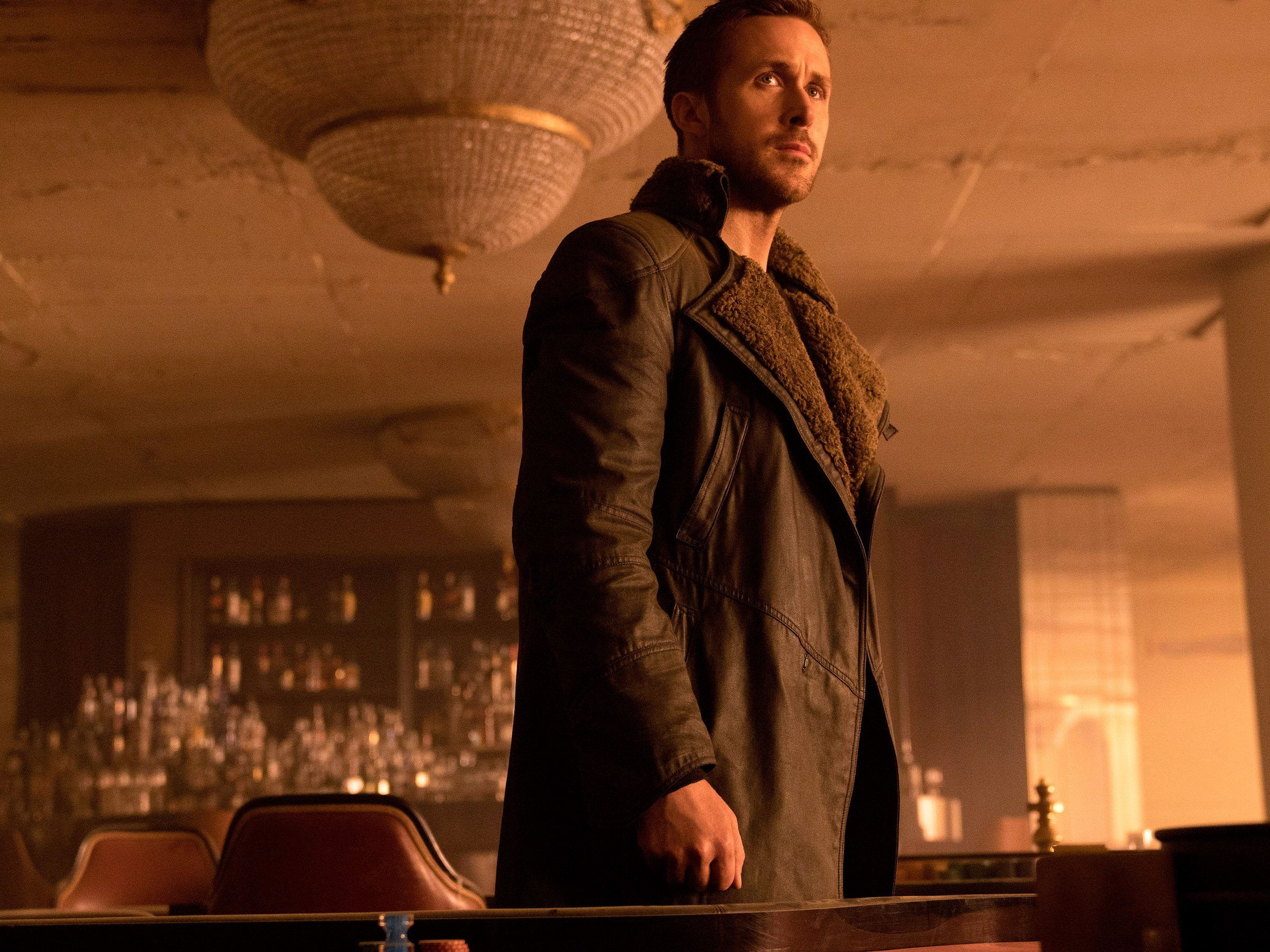 Blade Runner’s director Ridley Scott initially had no desire to do a sequel. He told Den of Geek, “We try not to repeat ourselves, and that’s why I always felt that I didn’t want to do a sequel.” Alcon, the folks who produced the movie, didn’t even think there was even another story to tell.

Well, actually there’s a very clear and present and straightforward story, which opens up into a more complex universe, with all its outcomes and characters. Because the very first film is a very clear indication of what the second will be. And I’m not going to tell you what it is, because I’ll give the whole thing away. And not only that, but it’ll sound too simple – but it’s not simple, it gets quite complicated.

It’s fundamentally about AIs, though. The idea that I always on insisted from day one, because I directed the f*cking movie, is that Harrison Ford, Deckard, is a Replicant. He had to be. So for this story to function today, he has to be a Replicant, otherwise, there’s no story.

Here’s what we know

Scott has always been adamant that Deckard is a replicant, but Blade Runner 2049 director Denis Villeneuve has been a bit more close-mouthed about the subject. We do know that in the years between the films, the global climate goes berserk.

Also, it’s clear that Jared Leto’s character, Niander Wallace, designs replicants (which are now back in vogue after not being made for some time.) From what we understand Niander thinks that humans are doomed, and replicants will be needed to take our place.

It may not just be replicants Niander is interested in. In the trailer, Robin Wright’s character, Lieutenant Joshi, claims that he also controls all of the weapons in the city. Are replicants weapons, or is it something else entirely?

Our future begins with the past

Gosling’s character Officer K does not just happen to cross paths with Ford’s Rick Deckard. Blade Runner 2049 will address all of the questions and answers that will uncover why they are brought together after all this time.

Three years after the events of the original film, which was set in 2019, there was a human supremacy movement. The anime short Black Out 2022 chronicles the movement, which resulted in replicants being wiped out.

A massively destructive electromagnetic pulse also destroyed a good chunk of the world. A new breed of replicants wasn’t approved until an entire decade afterward.

Multiple versions of Blade Runner have been released over the years since it first debuted in 1982. But Blade Runner 2049 won’t follow that same pattern. Villenueve told ComingSoon.net,

No, no. I don’t believe in that. When I cut something out, it’s because it’s dead after that. It’s like a branch of a tree: cut. I never put [out] extended versions or additional footage. If it’s not in the movie, it’s because we felt it was not appropriate or good enough. I don’t do that. I hate that. Honestly … it’s never better, the extended version. There was a reason — even Apocalypse Now. Apocalypse Now Redux is not a good idea. I don’t believe in it.

It’s no secret that Blade Runner 2049 looks futuristic AF. From the trailer, we can already see the incredible CGI renderings. However, director Villeneuve chose not to include a ton of devices, like cell phones and computers, in the film.

Villeneuve told CNET, “The virtual world is a very powerful universe but is not necessarily very cinematic. There’s nothing more boring than a detective behind the keyboard looking at Google.”

By erasing both Apple and Google from the world of 2049, Officer K is able to put his “[detective’s] hands in the mud and travel in the world, identifying clues.” 2049, according to the Academy Award-winning director, is a “movie that has the romanticism of old sci-fi.”

What’s in a name?

However Blade Runner 2049 performs the box office, it’s clear that Ford and Gosling worked really hard on getting it just right. But all of the press and attention may have made Ford a bit flustered recently.

In an interview with Gosling on The Graham Norton Show, Ford just couldn’t seem to remember Gosling’s name. At one point, he even turns to the La La Land actor and says, “Ryan? It’s Ryan, right?” Perhaps Ford’s mind is still somewhere in the future.

A punch in the face 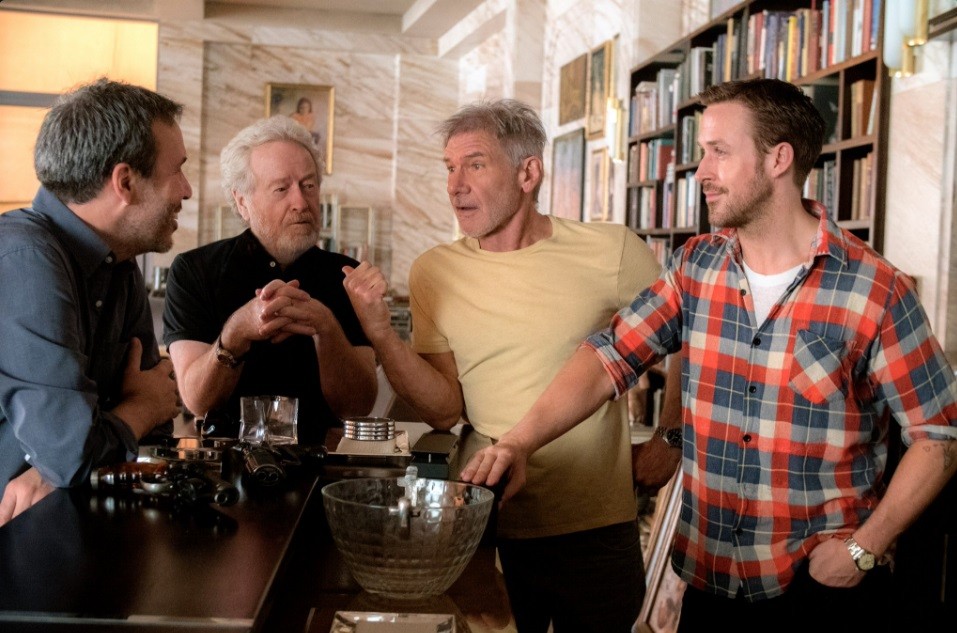 Last year in an interview with GQ, Gosling said that Ford accidentally punched him in the face while filming 2049. Ford copped to it, but also added that it was The Notebook actor’s fault for getting punched. As he said, “I punched Ryan Gosling in the face. Ryan Gosling’s face was where it should not have been.”

Luckily, the older gentleman apologized to his costar with a bottle of Scotch. But after pouring Gosling a glass, he left with the remainder of the bottle in hand.

Recapturing the tone of the original

Despite the hilarious antics both on and off set, Blade Runner 2049 will be something to behold.

In footage sent to Entertainment Weekly, the cast and crew discuss Scott’s vision for the film and how they embarked on capturing the magic and the tone of the original in the sequel.