Social media giant Twitter recently introduced new 280-character tweets for select users, up from its 150-character limit. Twitter told The Washington Post a “single-digit percentage” of its 328 million users were “randomly chosen” to test out the new limit. In a company blog post, product manager Aliza Rosen and senior software engineer Ikuhiro Ihara said the team looked into the restrictions of the 140-character limit after noticing differences among languages. 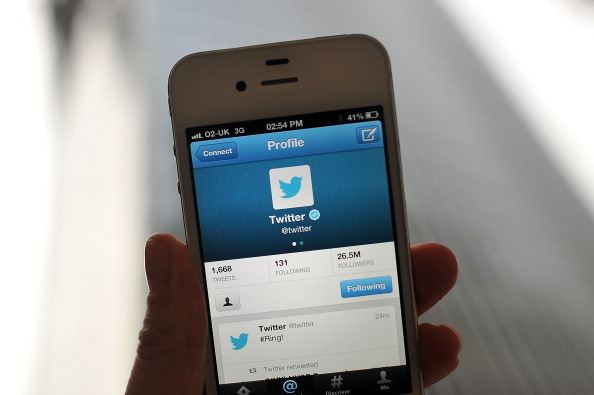 “Although we feel confident about our data and the positive impact this change will have, we want to try it out with a small group of people before we make a decision to launch to everyone,” the blog post said. “We understand since many of you have been tweeting for years, there may be an emotional attachment to 140 characters — we felt it, too. But we tried this, saw the power of what it will do, and fell in love with this new, still brief, constraint.”

Not all users agree. Check out some of the best ways users responded to the change.

This user really ‘smashed’ the limit

This user really became an All Star when he decided to launch a Smash Mouth singalong using his new 280-character limit. Believe it or not, Twitter users have co-opted these lyrics before. In October 2016, the Oakland A’s got into a Twitter fight with the singer after he tweeted mean things at the team. Then, in November, the Chicago Cubs fired back with a reference to the feud. What a time to be alive.

The next tweet shows another baseball team jumping into the fray.

The Mariners climb to the top … of the Twitter pile-on

The Mariners got that sweet, sweet 280 and used it for comedic effect. The Huffington Post released a list of must-follow baseball accounts earlier this year. We’re pretty sure they weren’t thinking of tweets like the Mariners’ when they created that ranking.

This next account used an iconic poem to hit back at the limit. 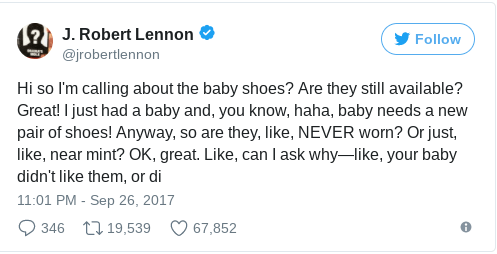 The micro-fiction poem “Baby shoes, never worn” has been widely attributed to Earnest Hemingway. Multiple sources have investigated it over the years, and no one has successfully uncovered its true author. Slate took a deep dive into it, but came up dry. Regardless, Lennon’s tweet shows what this tiny story might look like a bit, well, longer.

This next tweeter used the new limit to give us the information we’ve all craved.

Here, have even more facts 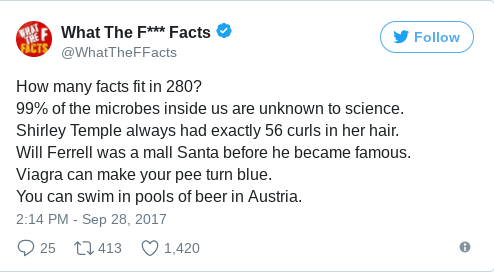 These facts make us say … well, you get the idea. | What the F*** Facts via Twitter

Jeopardy fans will love the newfound ability to squeeze even more useless facts into a tweet. This account took full advantage of the privilege. At least this user filled the tweet with conversation-starters instead of empty space, like many others. For those who get a kick out of random trivia, there’s an app for that.

Speaking of trivia, this next user answered some longstanding questions with his new limit. 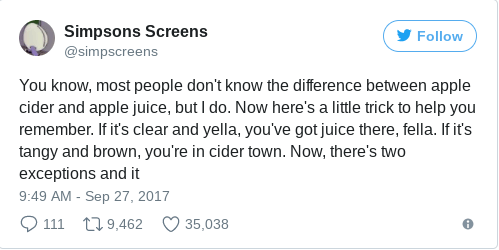 Thanks for clearing that up for us. | Simpsons Screens via Twitter

It’s apple pickin’ season, and some people might get confused about the difference between cider and juice. This user decided to help them out in just one tweet. For those interested in really geeking out, The Kitchn also created a useful guide.

This next user decided to give Twitter users a break from reading with his limit.

Don’t trust anything this guy says, clearly. | Ed via Twitter

Some users made more productive use of their extra space than others. This tweet just goes to show that some people can’t be trusted with 280 characters and will use their powers for evil.

And finally, because we can’t get that song out of our head either.

Twitter might think the new 280 character limit sounds like a good idea. These users represent just a small sample of those who will abuse the privilege. Just wait until Donald Trump gets his hands on it.