Here’s What Happens to Carl in ‘The Walking Dead’ Comics

Carl Grimes is easily one of the most polarizing characters on The Walking Dead. Some fans appreciate how much he’s grown since the series began. Others find his teen angst to be completely intolerable.

Many aspects of Carl’s story on the AMC series echo what happens to him in Robert Kirkman’s comics. But die-hard readers also know that the TV adaptation has diverged somewhat where Carl’s journey is concerned. Here’s everything that has happened to Carl in the comics so far.

Carl Grimes’ story in The Walking Dead comics started very similarly to what we saw on TV. We first meet him in the early days of the undead apocalypse. He’s just nine years old and traveling to Atlanta with his mother, Lori, and his father’s best friend, Shane. They had to leave his father Rick behind in Cynthiana, Kentucky, because he was in a coma when the outbreak hit. And as far as Carl knows, his dad is as good as dead. That is, at least, until Rick finds them at their camp in Issue 2 and the three happily reunite.

While he’s young, Carl is prepared to do whatever it takes to survive from the get go. Despite his mother’s wishes, he’s eager to learn how to use a gun. But it will be a while before he starts to learn the true consequences of taking on such adult responsibilities.

2. Growing up on death’s door

In Volume 1, “Days Gone Bye,” Carl sees Shane try to kill his father. So he shoots him in the neck and kills him. While it’s easy to assume that the whole ordeal would be traumatic for someone as young as Carl, he takes it quite well. Whenever he reflects on the fact that he had to kill his father’s best friend, he remembers him as a “bad man.”

The encounter with Shane and subsequent fallout isn’t the last time that Carl faces life-or-death situations. In “Miles Behind Us,” Carl is shot by Otis. Though he nearly dies, he eventually makes a full recovery. After his group travels from Hershel Greene’s farm to the prison, he starts to crave a bit more independence. He takes issue with the fact that he still has to be babysat. And he starts to grow closer to his fellow survivors, like Sophia.

This particular relationship doesn’t go over well with his mother. That’s because she has a volatile relationship with Sophia’s mother, Carol. Lori eventually tells Carl that he can’t play with Sophia at all.

3. Longing for a father figure

Throughout the early issues of The Walking Dead comics, Carl struggles to maintain a relationship with Rick. He admires his father’s strength and courage, but feels him growing increasingly distant. He struggles with the fact that his father is always putting himself in danger, and leaving the prison for long periods of time. In Issue 36, after Rick leaves the prison yet again to deal with the Governor, Carl turns to Tyreese for advice. He asks Tyreese if his father even loves him.

Though Carl feels his father’s absence, he finds comfort in the rest of his family. That’s especially true after his sister, Judith, is born. But tragedy intervenes to take even more of Carl’s sense of security not long after she’s born.

4. Traumatic losses and plenty of blame

In Volume 8, “Made to Suffer,” the Governor attacks the Prison. And in Issue 48, in the midst of his siege, Lori and Judith are both shot and killed. It’s a horrific moment, one that forever changes how Carl interacts with the world.

At first, after he and Rick flee the prison, Carl blames his father for his mother and sister’s death. And he’s further traumatized when Rick falls ill and Carl believes he may have to kill him, too. While Rick ultimately recovers, Carl starts to believe that he can fend for himself. But eventually, he realizes he still needs support.

A moment of realization for Carl Grimes | Image Comics

Rick and Carl’s relationship isn’t perfect after Lori and Judith’s death. But they manage to forge on, and head toward Washington D.C., because it’s their only choice. And it isn’t long before their bond is truly put to the test.

For more than 50 issues, Carl watched as he and his family took a backseat to Rick’s other responsibilities. But in Issue 57, they’re are ambushed on the road — along with their new friend, Abraham — and Rick shows once and for all that he’ll do anything to save his son.

The bandits threaten to rape and murder Carl in front of Rick. And in an unforgettable moment that should be familiar to fans of the series, Rick bites one of the bandits’ neck, killing him.It’s a traumatic moment for Carl, and not the last he has while on the road.

Ben, a fellow young survivor kills his brother, Billy, to prove that all people come back to life. While the adults in their group try to decide how to handle it, Carl takes matters into his own hands. He executes Ben in Issue 61, and at first, it seems like yet another sign that he’s becoming an increasingly broken young man.

But eventually, he breaks down and admits in Issue 66 that he killed Ben. The genuine remorse he feels shows that despite everything he’s been through, he isn’t completely closed off from the world. And that becomes especially important once Rick and his group settle in their new home: Alexandria. 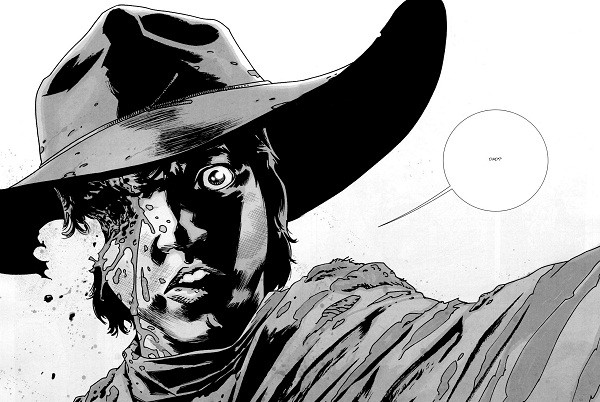 At first, Alexandria seems like an idyllic place to rest and recuperate. But for Carl, it ends up being, in some ways, every bit as dangerous and life altering as his time on the road.

Alexandria is protected from the undead and any other potential foes by tall, seemingly impenetrable walls. But eventually the wall gives way, and a huge hoard of walkers takes over the small community.

In Issue 83, during ensuing chaos and panic, Carl is accidentally shot in the face by Alexandria’s leader, Douglas. While he survives the nearly fatal incident, he loses his eye and his memory. Rick is forced to explain to Carl all over again what happened to his mother and what their lives are like.

Even though Alexandria proves to be a somewhat perilous place to live, Carl and his friends live with the Safe Zone survivors in relative harmony. That is, until, the Saviors enter the equation. Led by Negan, the group gets by purely by bullying and inflicting violence on other survivors.

After a new ally from the Hilltop, Paul Monroe, fills Rick in on the Saviors’ dangerous tendencies, Carl offers up a seemingly preposterous idea. In Issue 9, he bluntly suggests that if he, his dad, and their allies can kill the Saviors, then they can take a share of the Hilltop’s supplies. Both Paul and the Hilltop’s leader Gregory agree that the idea could work.

But ultimately, their encounter goes wrong. In Issue 100, Negan and his men kidnap several members of Rick’s crew. And they ultimately murder Glenn in retaliation. Afterward, in Issue 101, Maggie lashes out at Rick and blames him for Glenn’s death. Carl pulls a gun on Maggie to prevent her from doing further harm to Rick.

Just because Carl is willing to take his father’s side, though, doesn’t mean he isn’t afraid to call him out when he’s wrong.

He is always a proponent for fighting, rather than negotiating with, the Saviors. And he disagrees with some of his father’s decisions in the lead up to their extended war with Negan and his men.

In Issue 104, he steals away onto the Saviors compound to try to handle the situation himself. And Negan is impressed with his stoic demeanor and ruthlessness. He even tells him that he thinks Carl could become a serial killer. He eventually returns Carl back to Alexandria, unscathed. But it’s not the last time that he and Carl connect.

After the “All Out War” ends, Negan is imprisoned in Alexandria. And Carl visits him frequently to share information about how life is going. He tells Negan a lot of details that you’d think he might share with Rick — information about girls he has crushes on, or what’s happening with his friends. But, we see in Issue 127, he never fails to remind his adversary that he still wants to kill him, too. 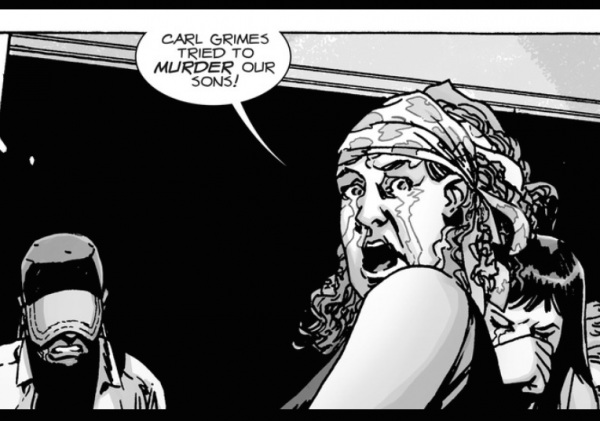 Once Rick and his allies put the Saviors in their place, life returns to relative normalcy for Carl (at least, as normal as life in a zombie apocalypse can be). He and Sophia are dating, and he’s grown closer to Rick’s new partner, Andrea, and even calls her “Mom.” And he’s starting to look toward the future, and starts training as a blacksmith.

Eventually, though, Carl is tested once more. In Issue 134, while he and Sophia are enjoying a quiet moment together, they’re attacked by two bullies. The young boys hit Carl with a brick and try to abduct Sophia. But Carl catches up with them, and brutally beats the boys with a shovel.

The event doesn’t go over well at the Hilltop, where Sophia is being treated for her injuries. The parents of the boys turn on Carl, accusing him of being a monster. He’s eventually placed, temporarily, into a cell to be monitored (and kept away from the parents that want his punishment to be more extreme).

Lydia and Carl in the grass | Image Comics

While in the Hilltop prison, Carl meets Lydia, and his life gets even more complicated. She is the daughter of Alpha, the leader of a dangerous group of survivors, the Whisperers. They bond as they trade stories about their life in the apocalypse — and after Carl is released, he convinces Maggie to go easy on Lydia.

While he’s giving her a tour of the Hilltop, Lydia makes the first move. In Issue 137, Lydia asks Carl if he’s ever had sex before, and when he says he hasn’t, offers to show him the ropes.

Their relationship is instantly complicated — Maggie wants to release her to her mother and the rest of the Whisperers and Carl wants her to stay. After Maggie wins out, and Lydia rejoins her people, Carl leaves the Hilltop to find her.

Eventually, the two groups go to war. And Carl and Lydia experience some extreme ups and downs in their relationship as she struggles to reconcile the way she’s had to live her life (and the abuse she suffered at the hands of the Whisperers).

In Issue 162, as the war winds down, Lydia laments the fact that she was ever a part of the Whisperers. But Carl reminds her that they’ve all done terrible things to survive, and this fact helps them grow even closer.

It’s good that Carl has Lydia by his side in the wake of the Whisperer War, too. Because he suffers another traumatic loss when Andrea, his surrogate mother of sorts, dies after being bitten by a walker in Issue 167.

At this point in The Walking Dead comics, Carl has grown from a jittery child to a confident young man. Though it hasn’t been easy, and while he has a deep-seated darkness to him, he remains one of the most interesting characters in Kirkman’s comic series. And he may be one of the few major players that truly has what it takes to make it to the end.