Here’s What We Know About ‘Scalebound’

Here’s an odd question: Do you like dragons and headphones? Because both of those things feature prominently in Scalebound, an Xbox One exclusive game that’s scheduled to launch “holiday 2016.” We just got a first look at the gameplay, and it seems to be shaping up nicely so far. Let’s dig into all the details the developers have announced to get a better sense of just what this game is.

The minds behind the game

Scalebound is being developed by PlatinumGames, a studio that’s well known for its action titles like Bayonetta and Devil May Cry. One thing that ties those action games together is the combat. One attack flows into the next, creating over-the-top combos and fluid movement from one enemy to the next.

The project is being led by Hideki Kamiya, a director who’s worked on a number of notable games across an impressive array of genres. He’s headed up games like Resident Evil 2, Devil May Cry, both Bayonetta titles, and even the artistic adventure game Okami.

The footage in the trailer above shows the main character, Drew, soaring through a lush forest on the back of Thuban, his giant, terrifying pet dragon. Thuban spies a group of heavily-armored medieval-style soldiers camped out on the ground and swoops down for a closer look.

After some charming banter between Drew and Thuban — whose indecipherable grunts Drew seems to understand (think Han solo and Chewbacca) — Drew puts on his over-the-ear headphones and cranks up an electronic beat. Then combat begins. 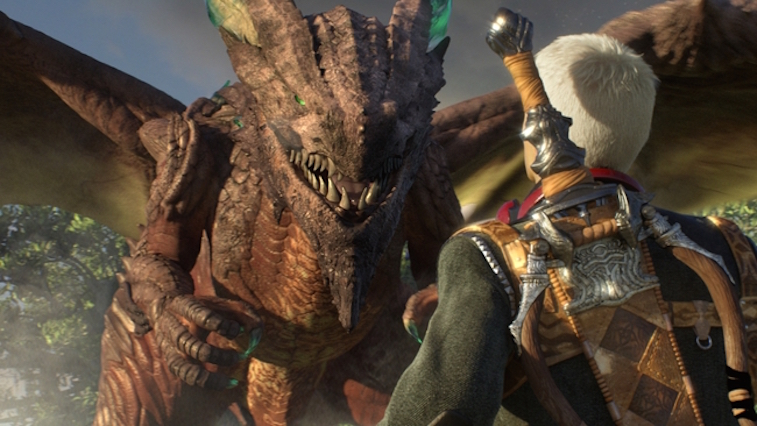 Drew uses a sword to quickly dispatch a group of soldiers, sending numbers into the air with each strike, just like in a Final Fantasy game. Presumably, the numbers indicate how much damage each attack is doing, which implies that Scalebound has RPG roots.

Soon more knights appear, and Drew addresses them using a bow loaded with exploding arrows. Meanwhile, the dragon makes quick work enemies on his side of the battlefield. In short, it looks like a solid action game that lets you fight alongside a dragon. Which is pretty awesome.

Some mysteries remain, like why Drew’s right arm is scaled and taloned like a dragon’s, and why he has modern-day headphones in what appears to be a standard fantasy setting.

Nameless soldiers aren’t your only foes in the game, either. Like in Monster Hunter, you’ll face off against giant beasts in Scalebound as well. Once Drew and Thuban finish off the soldiers, they’re attacked by a scaly monstrosity called Mantis, who puts up more of a fight than the soldiers do. At one point, Drew seems to shape-shift into a small dragon, which lets him perform a special dashing attack.

The trailer also reveals that the game will feature a four-player co-op mode. In the glimpse we see in the trailer, Drew is gearing up to face off against a towering, multi-headed beast when a few friends appear with dragons of their own. How this is integrated into the core game, and how many beasts you’ll need help to slay, remains to be seen.

Overall, the game looks to be shaping up nicely. Since it won’t release until the end of 2016, it’s still a long way off. But if it ends up offering a fresh take on the Monster Hunter formula, but with excellent combat, it’ll definitely be a game Xbox One owners should keep on their radar.