The Hilarious Name Everyone Is Giving Pippa Middleton’s New Haircut

In summer 2017, Kate Middleton debuted a new haircut at Wimbledon. The Duchess of Cambridge ditched her long tresses for a shoulder-length ‘do. A few months later, her younger sister, Pippa Middleton, followed suit and stepped out for a bike ride in London with a shorter hairstyle. The trendy lob (long bob) is the same cut that other celebrities, like Kerry Washington and Jenna Dewan Tatum, have been rocking lately.

Pippa’s blunt cut is a departure from the longer loose waves we have become accustomed to seeing on her, and royal watchers have decided to give her shorter look its own name. Here’s what her ‘do is being called, as well as a list of some of her other most talked-about hairstyles.

Look at Pippa's new haircut!! I really love short hair on her. #pippamiddleton

Pippa, who is known for her fashion sense, was spotted out on Sept. 12, 2017 in a button-down plaid shirt and dark-colored jeans. But her new lob cut was all anyone wanted to talk about. People even came up with a name for it almost immediately, dubbing it the “pob.”

Of course, this name made sense after the public dubbed Kate’s cut the “kob.”

This stylish outfit was a winner. | Ian Gavan/Getty Images

In 2016, Pippa attended the British Heart Foundation Ball in London where she sported a black-and-white dress with red heels and a heart-shaped purse.

Her hair was pulled towards one side in a stylish bun with one loose curl that fell alongside her face.

For the ParaSnowBall 2017 fundraiser at The Hurlingham Club in London, Pippa wore a blue Erdem gown with a bejeweled neckline.

She accessorized the look with matching heels, a clutch, and had her long locks flowing.

Pippa wore a @tabithawebbuk dress to Wimbledon today! How fabulous does she look? #pippamiddleton

The royal-in-law always wows us year after year with her styles at Wimbledon, and 2016 was no different. Pippa looked super stylish on the eighth day of the tennis tournament in a retro Tabitha Webb dress.

She wore nude pumps with the outfit and completed her look with a sleek and straight hairstyle, which was a change from her signature loose waves. 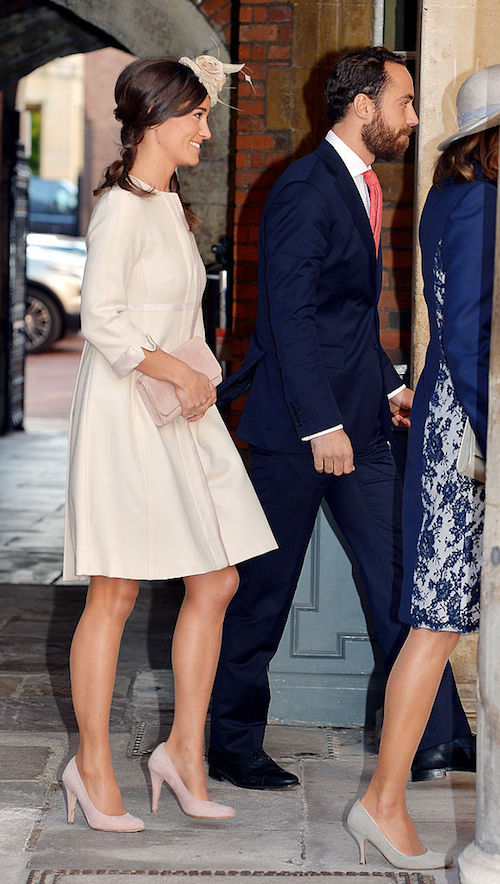 She wore this dreamy outfit on the formal occasion. | John Stillwell/WPA Pool/Getty Images

At her niece’s christening in 2015, Pippa looked elegant in a cream-colored Emilia Wickstead ensemble.

Princess Charlotte’s aunt sported a festive hat, and her hair underneath was neatly pulled back for the royal affair.

I love these photos of Pippa holding Kate's train as they walk into Westminster Abbey. #pippamiddleton #duchessofcambridge

In 2011, the whole world was introduced to Pippa when her sister married Prince William. She served as a bridesmaid in their wedding and carried Kate’s train as she entered the church.

For the event, the Celebrate author wore her hair in a half-updo with curls and flower accents.

All eyes were waiting to see Pippa’s look when she married hedge fund manager James Matthews in May 2017, and she did not disappoint. The bride was gorgeous in a custom gown by British designer Giles Deacon. The dress featured a lace bodice, cap sleeves, and a keyhole back.

Pippa’s hair was pulled up for her big day, with a sparkling tiara under her veil.