John Carpenter is one of the most well known names in horror filmmaking. For almost 40 years, this 67-year-old New York native has thrilled audiences with some of the most beloved horror movies of all time. It’s thanks to him that we feel uneasy whenever a fog rolls in, or sometimes stop to wonder who’s behind that mask on Halloween night.

While Carpenter has helmed some pretty terrifying films in his career, not all of his films are created equal. Interested in seeing which movies are worth your time, and which ones you can skip? We’ve ranked John Carpenter’s horror films from worst to best. 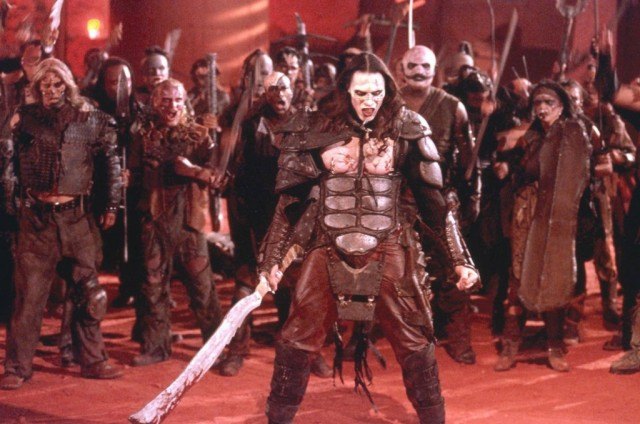 This futuristic sci-fi horror film isn’t exactly as groundbreaking as John Carpenter may have hoped it would be. Ghosts of Mars has an interesting, if far-fetched premise; on a colonized Mars in the not-too-distant future, a team of experts explore the underground terrain and learn that an ancient Martian civilization has the ability to possess humans with violent spirits. The main problem with this ambitious project is its failed execution. Critics at Rotten Tomatoes panned the movie for its poor dialogue, confusing plot, and bad acting. But perhaps the biggest disappointment is that between the over-the-top effects and campy sequences, Ghosts of Mars isn’t scary at all.

Village of the Damned | Universal Pictures

Children in horror movies are inherently creepy. But unfortunately, that element is just about all this remake had going for it. John Carpenter’s Village of the Damned sort-of followed the plot of its 1960 predecessor, which followed a sleepy town that’s suddenly infested with preternaturally stoic and incredibly evil youngsters. But while its white-haired, red-eyed, psychic children are predictably frightening, the rest of the film is decidedly dull. It’s not that Carpenter and his cast didn’t make an effort — Christopher Reeve is pretty good as a town doctor in over his head, and the little-known Linda Kozlowski is terrific as a terrified mother of one of the most sinister children. But Village of the Damned ultimately fails to deliver on the promise of a supernatural thrill.

The Halloween franchise has had its share of up and downs. And while John Carpenter didn’t direct every installment, he did have a hand in delivering one of its worst films to date. Halloween II had a lot to live up to, following the beloved original. Unfortunately, it totally missed the mark. That’s not totally Carpenter’s fault — he only came on at the end to reshoot a few sequences. Still, the plot is convoluted, the deaths often over-the-top, and the film ultimately lacks the true tension of the original Halloween. Film critic James Berardinelli summed it up best with his scathing review of the sequel when he complained that “Halloween II was impelled by the desire to make money. It was a postscript — and not a very good one — slapped together because a box office success was guaranteed.”

After taking a break from directing, John Carpenter returned to horror — though definitely not in top form. The Ward is a psychological thriller about a haunted psychiatric unit where the ghost of an inmate terrorizes patients in the 1960s. While the film had a lot of potential, it lacks a compelling plot, interesting characters, and the chilling atmosphere that Carpenter has utilized in many of his other films. And unfortunately, that makes The Ward a hectic and often uneven attempt at a comeback. 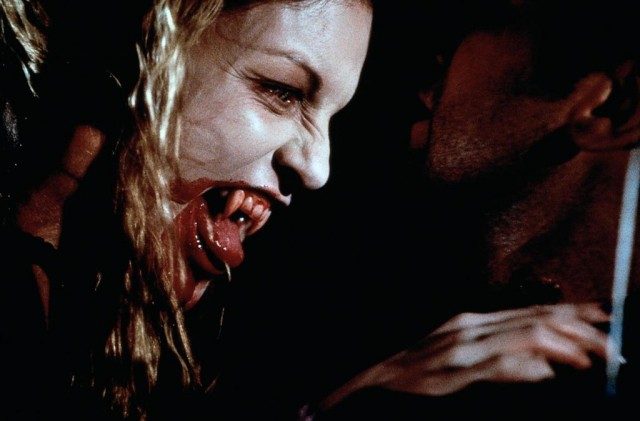 This genre-bending film about a group of Catholic mercenaries who battle vampires in New Mexico is certainly a thrill ride. And Vampires is without a doubt one of John Carpenter’s most entertaining films. With a powerhouse performance from James Woods as a vampire hunter and some of Carpenter’s goriest sequences to date, the film is undeniably exciting. But it’s also a departure from Carpenter’s often more restrained filmmaking style. Vampires also lacks one quality that truly makes a horror film succeed — for all its violence and energy, it’s not all that scary. 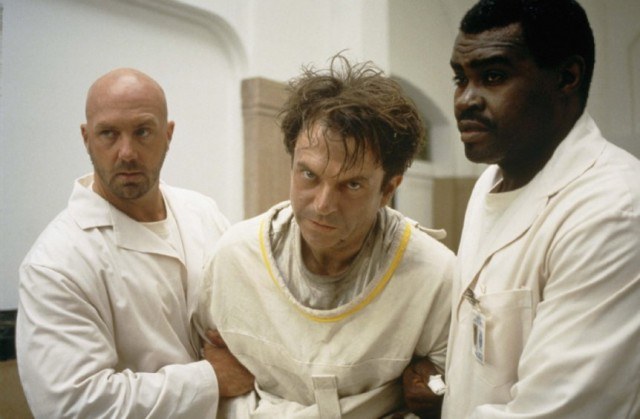 In the Mouth of Madness | New Line Cinema

Certainly one of John Carpenter’s most divisive films, In the Mouth of Madness is also one of his most ambitious. The film stars Sam Neill as John Trent, an insurance investigator who falls into a disorienting journey into missing horror author Sutter Cane’s macabre world. Throughout the film, both Trent and ultimately the audience are unsure whether what he’s experiencing is really happening to him. The result is a dizzying, sometimes terrifying tale. Some feel that In the Mouth of Madness is too confusing. Others find it to be a satisfying, Lovecraftian thrill.

John Carpenter’s Prince of Darkness wasn’t well received when it was first released. But it’s gained fans through the years due to its macabre, surreal atmosphere, and chilling story. Prince of Darkness follows a group of people, including a priest (Donald Pleasence) and a professor (Victor Wong) who try to uncover the origin of a strange cylinder of swirling green liquid. What results is a meditation on the true nature of good and evil — and one of John Carpenter’s most disturbing, if convoluted, films. 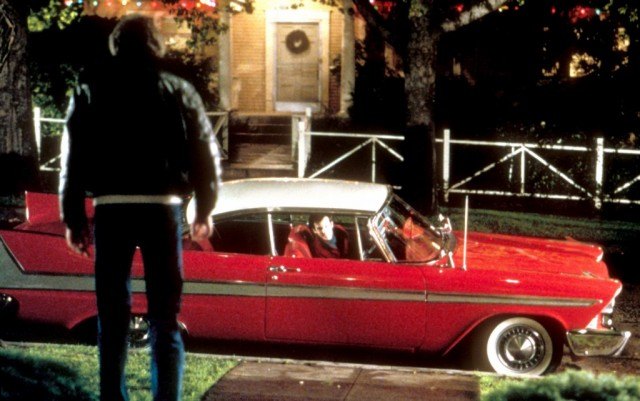 This film is exactly what you’d expect from a collaboration between two horror masters. And John Carpenter’s adaptation Stephen King’s novel, Christine, is certainly enjoyable. The film tells the story of a sentient, sinister 1958 Plymouth Belvedere and the horrors it inflicts on its young owner, Arnold (Keith Gordon). Christine gets to the heart of King’s thriller — and while it sets a perfectly creepy mood and delivers high-impact suspense and moments of genuine horror, Carpenter also makes sure it’s undeniably entertaining. 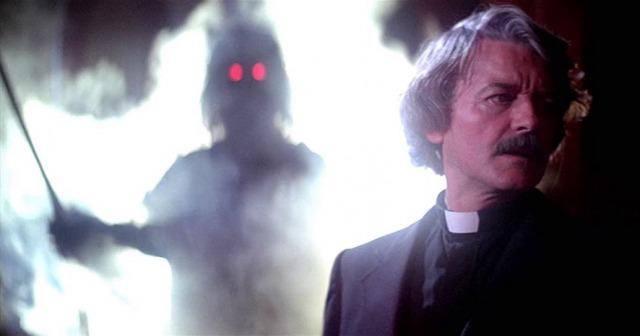 A sinister crew of ghostly mariners sweep into a quiet coastal town in a dense and deadly fog. John Carpenter’s The Fog certainly has a terrifying premise. And it builds expertly, creating a moody atmosphere that eventually transitions into a chilling climax. The film’s perfunctorily creeped-out cast is led by scream queens Jamie Lee Curtis and Janet Leigh. But the real star of the film is John Carpenter’s minimalistic style. In The Fog, he sets up scares with few and often simple effects. And he proved that glowing red eyes and slowly approaching figures can be just as terrifying as blood and gore. 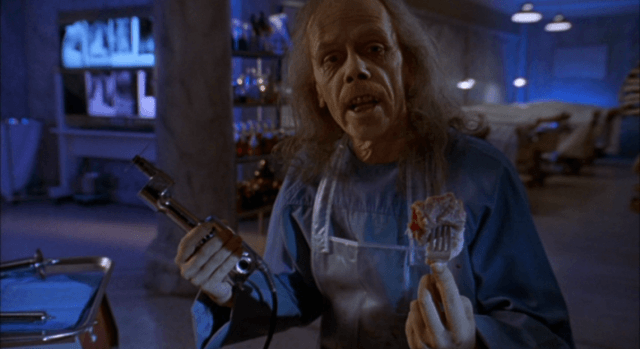 John Carpenter teamed up with another horror master, Tobe Hooper, for this anthology telefilm featuring three spooky stories. Body Bags blends horror with sci-fi, and though it was created for television, it still manages to pack an often wicked punch. In many ways, Body Bags feels like an homage to horror — full of serial killers, evil parasites, and otherworldly possession, it utilizes many tropes that have made the genre so popular. But it’s also one of Carpenter’s most deliciously scary undertakings. 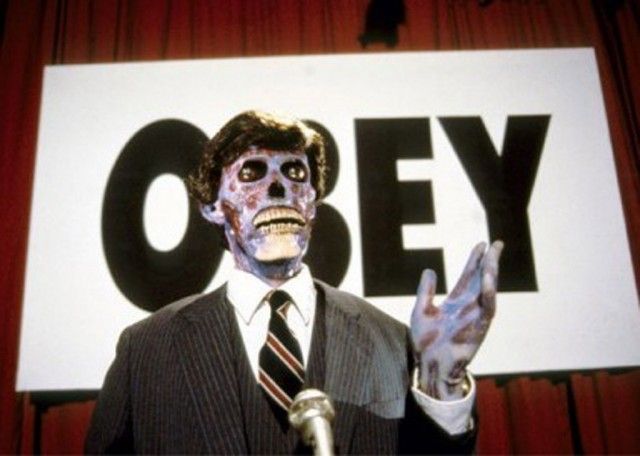 Though he rarely dabbles in comedy, John Carpenter managed to create one hell of a clever horror satire with They Live. The film follows a drifter (Roddy Piper) who discovers that everyone around him is actually an alien bent on mass manipulation through the media. What unfolds is a sometimes hilarious and often over-the-top combination of science fiction, cheap thrills, and commentary on society. They Live is as subversive as it is entertaining, and has gained a cult following due to its ridiculous action sequences, memorable characters, and highly quotable script.

The Thing is in many ways one of John Carpenter’s most impressive films. It’s the first of his “Apocalyptic” trilogy — the other two are Prince of Darkness and In the Mouth of Madness. And it’s his best attempt at creating a world with potentially catastrophic consequences. The Thing follows a team that discovers an alien parasite in a remote research facility and must subsequently try to destroy it or risk total annihilation of civilization. The Thing has been noted for Kurt Russell’s brilliant performance as MacReady, a helicopter pilot and the film’s protagonist. But it’s also a master class in mood and horror. Carpenter takes a seemingly innocuous setting and creates an increasingly terrifying situation. Though it was a financial failure upon its initial release, The Thing has since been reevaluated and is considered by many to be a horror classic. 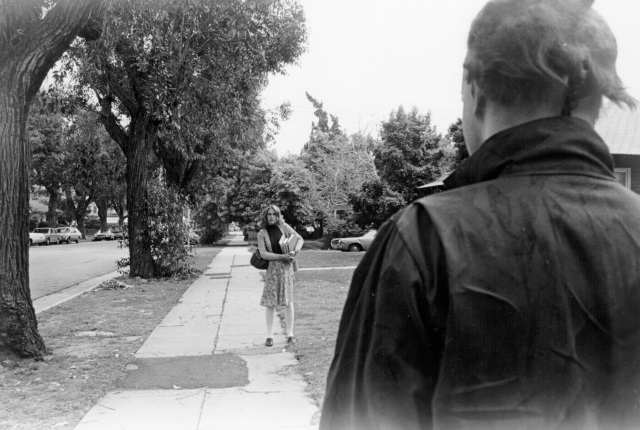 It’s one of the most celebrated horror films of all time — and with good reason. Halloween helped to pioneer the slasher genre, and introduced innovative new ways to tell a scary story. It sets a sinister, all-consuming tone with everything from its deliberate score to its painfully long shots. And it creates one of the most iconic villains ever in Michael Myers, a hulking, seemingly unkillable man behind an unforgettable mask. Halloween feels like a walk through a haunted house — you flinch as you watch it, waiting for the next terrifying moment to arrive.