Macy’s Thanksgiving Day Parade: How Are Macy’s Balloons Made?

Macy’s Thanksgiving Day Parade is full of impressive, awe-inspiring festivities. But, perhaps the most fascinating thing about the 92nd annual parade is the giant balloons that float down Sixth Avenue every year. From their massive size to their design, we can’t help but wonder: How are Macy’s balloons made? We take a closer look at what it takes to make these floating sculptures come to life, ahead. 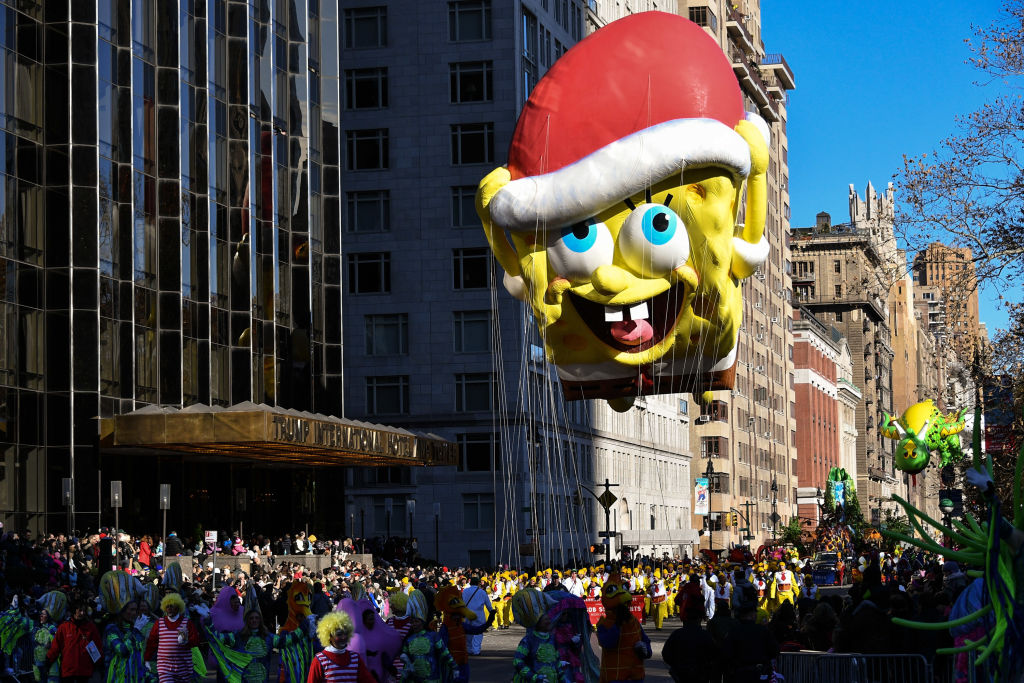 What are Macy’s balloons filled with?

While it might take an hour and a half to inflate the balloons, it only takes about 15 minutes to deflate and pack them up for next year. After the parade is over, the balloon handlers open up zippers on the balloon’s sides and let the helium escape. Once most of it is out, they lay down on the balloon (kind of like you would with an air mattress), roll the character up, and put it in storage.

How much do Macy’s balloons weigh?

Because they are blown up with helium, Macy’s balloons don’t weigh all that much. However, they can carry a lot of weight. Since each balloon carries an average of about 12,000 cubic feet of helium they can lift around 750 pounds. That explains how some balloons have managed to knock over street lamps and cause injury in years past.

How are Macy’s balloons made?

There’s no doubt that the Macy’s Thanksgiving Day Parade balloons are impressive. But, aside from their ginormous stature, the biggest wow factor is in how Macy’s balloons are made. Up ahead, we deep dive into what it takes to get these stories-tall balloons down Sixth Avenue on Thanksgiving Day.

Designers that work on Macy’s balloon team are called “Balloonatics.” They were tirelessly to make new designs happen every year.

It starts with a pencil sketch

About a year before the next Macy’s Thanksgiving Day Parade, the Balloonatics start by pencil sketching their designs for sponsored balloons. However, these sketches are a lot more intricate than you think. Each one features an analyzation of the visuals along with an in-depth look at aerodynamics and engineering.

Before they can become inflatable, the Macy’s balloon designs get turned into two miniature clay models. One of the scaled-down models focuses on the more technically advanced details and the other is painted to match the desired balloon colors.

After the clay miniatures are created, it’s time to figure out how much helium is required for each balloon. To do so, designers and engineers dunk the clay models in water to calculate how much of the gas is required for the specific balloon to float. Each balloon varies, but the average amount is around 12,000 cubic feet.

After all the pre-design work is taken care of, it’s time to make the actual balloon. At this point, all the details get scanned by a computer and the pieces of fabric get cut and heat-sealed.

Contrary to what you might think, the balloons get painted after the fabric is cut and heat-sealed. To paint the colors, each balloon is inflated (that way the paint doesn’t crack) and painted like a sculpture.

After everything is painted, the balloons take their first flight. Each balloon undergoes certain safety measures, including indoor and outdoor flight tests.

Balloons are finished by Halloween

All new Macy’s Thanksgiving Day Parade balloons get completed around Halloween. They are then stored along the walls of the design studio (aka an old Tootsie Roll factory in Hoboken, New Jersey) before making their way to Manhattan for their big debut.