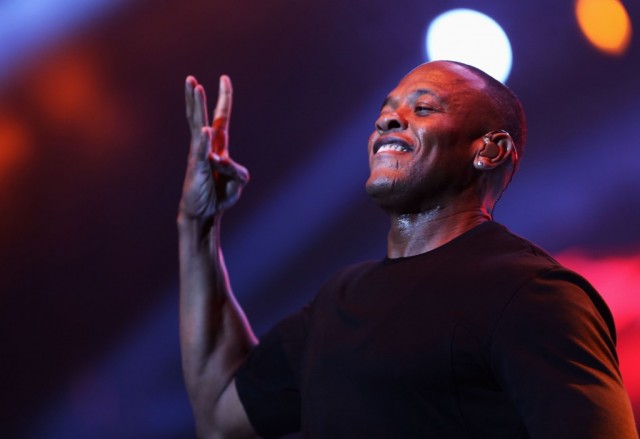 Forbes just released its annual ranking of the world’s highest-paid musicians, and though many might have predicted that Beyoncé would top the list, No. 1 actually went to another hugely successful artist: Dr. Dre, who ended up taking the title by a record-breaking margin of half a billion dollars.

In order to create its top 30 list, Forbes takes into account income from touring, music sales, publishing, merchandise, endorsements, and various other ventures that occurred between the June 2013 and June 2014 fiscal year.

According to the magazine, Dr. Dre (who also topped Forbes’s Hip-Hop Cash Kings list a few months ago) earned a whopping $620 million over the past year — mostly thanks to the recent sale of Beats, the company he co-founded, to Apple for $3 billion. That figure not only makes Dr. Dre the top-grossing musician of the year, it’s also the largest single-year earning by any musician ever.

His impressive income gave him the widest margin in history between the first- and second-place spots in the ranking, although Beyoncé isn’t exactly hurting as the No. 2 earner on the list. The singer, who beat out Taylor Swift to nab the title of this year’s highest-earning female artist in November, is the only woman in the top 10, having reportedly raked in a total of $115 million.

Between the surprise release of her self-titled album, endorsement deals with Pepsi and H&M, and her hugely successful world tour — the latter of which earned an average of $2.4 million per city — Beyoncé was able to more than more than double her earnings from last year and make 2014 her most lucrative year to date.

Only one other group brought in a nine-figure salary over the past year: The Eagles, who came in at No. 3 with $100 million in earnings. The rock band owes its sizable paycheck largely to the success of its ongoing History of the Eagles tour. Rounding out the top five are Bon Jovi, who earned $82 million, thanks to Because We Can Tour; and Bruce Springsteen, who grossed more than $4 million per night with his band during their tour.

Other names that made it into the top 10 include young artists like Justin Bieber, whose last tour helped him bring in $80 million (the largest total earnings of his career) and earn the No. 6 spot in the ranking; as well as One Direction, who fall at No. 7 with $75 million in earnings thanks to concerts, commercial deals with Pepsi, and another chart-topping album in Midnight Memories. Paul McCartney, the oldest member of the top 10, lands at No. 8, with a $71 million payday earned from his popular tour.

Calvin Harris becomes became the highest-earning DJ ever ranked by Forbes, scoring a total of $66 million from a combination of six-figure fees for nightly engagements and equally lucrative paychecks from his work as a producer for big artists like Rihanna. Toby Keith became country’s most highly paid artist, earning $65 million from his own record label, restaurant chain, and mescal brand.

Swift, Jay Z, Bruno Mars, Justin Timberlake, Rihanna, Katy Perry, Celine Dion, Lady Gaga, Luke Bryan, and Drake were among some of the other names that also made it onto the list. Other artists like Britney Spears, Avicii, Kanye West, Madonna, and Macklemore also earned big, but didn’t quite make it into this year’s ranking.