How Is Chris Pine’s Steve Trevor Back in ‘Wonder Woman 1984’? Here Are Some Possible Explanations

After months of rumors, Patty Jenkins recently confirmed that Chris Pine will return in Wonder Woman 1984. This is, of course, fairly ridiculous on the surface, considering his character died dramatically in the original Wonder Woman. So what’s going on here? How is Steve Trevor going to be back? Let’s take a look at the possible explanations. 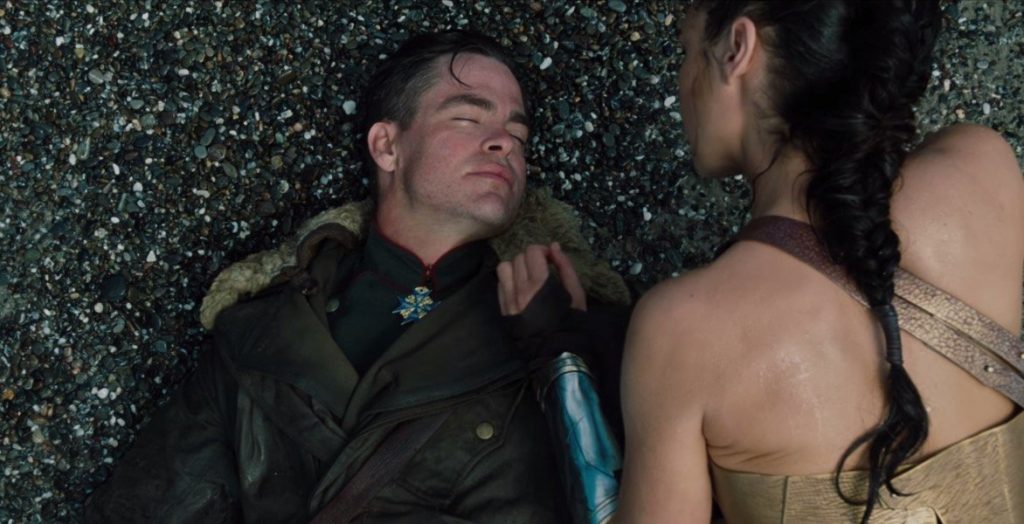 One popular theory is that Chris Pine isn’t playing the original Steve Trevor from Wonder Woman. Rather, it’s possible he’s playing one of Steve’s descendants.

There’s some precedence for this in Wonder Woman history. In the original Wonder Woman TV show, Steve Trevor is a character played in the first season by Lyle Waggoner. Then, between Season 1 and 2, Steve Trevor dies. But Waggoner returns for the second season, playing Steve Trevor’s son.

However, Jenkins’ tweet does make reference to Steve Trevor and not Steve Trevor Jr., so this might not be the case for Wonder Woman 1984.

Another common theory is that Steve Trevor appears in the movie just as a recurring hallucination that Diana has; alternatively, perhaps it’s in a dream sequence.

But this doesn’t seem too likely because in the image Jenkins released, Steve is wearing an outfit appropriate to the 1980s. If Diana were imagining the Steve she knew, she would probably picture him in his World War I-era garb.

The Themyscira bath allowed him to survive

In the original Wonder Woman, Steve at one point takes a bath on Themyscira. Now, some fans think this could be connected to his return. Perhaps the magical water on Themyscira made it so that Steve does not age, or he ages very slowly, — hence why he looks exactly the same in the 1980s as he did in the 1910s.

It could have also made him immortal, which would explain how he survived the plane explosion, although that doesn’t explain why he’s not present during Batman v. Superman and Justice League.

He’s from an alternate timeline

Perhaps this Steve Trevor is actually from an alternate timeline, and due to some time travel shenanigans, he has merged over into Wonder Woman’s.

There’s some precedence for this, as there was once a comic book storyline in which Wonder Woman meets a Steve Trevor from another universe. Aphrodite ends up wiping this Steve’s mind and filling it with the memories of the original Steve, effectively bringing him back to life.

A villain takes over his body to trick Diana

Could it be that Warner Bros.’ is planning a massive twist here? Perhaps the audience is led to believe in this sequel that Steve Trevor has returned, only for it to be revealed that it was actually just the villain in disguise all along, and the real Steve is still dead.

This would be similar to a comic book storyline in which Steve returns having seemingly been resurrected, only for it to be revealed that he was the god Eros all along. In another comic, Doctor Psycho creates a fake Steve Trevor to torment Diana. So maybe that’s what happens in Wonder Woman 1984.

It’s literally the real Steve brought back to life

The final option is that Steve Trevor did die at the end of Wonder Woman, but in this movie, he is somehow resurrected. While the specifics aren’t clear, this is a world with gods in it, so it’s not entirely unreasonable to imagine. Recently, DanielRPK, who has been a fairly reliable source when it comes to DC news, said on Twitter that Pine is playing the real Steve Trevor.

But once again, Steve doesn’t seem to be around in the DC movies’ present timeline. This suggests that either he dies again, or his return is a bit complicated and doesn’t necessarily have a happy ending.