How ‘It’s a Wonderful Life’ Went From Flop to Classic

It’s a Wonderful Life was once considered a failure, a film that demonstrated how director Frank Capra’s brand of folksy American idealism, best represented by Mr. Smith Goes to Washington, also starring Jimmy Stewart, could no longer resonate with the American people after the world-altering events of World War II. The surprisingly expensive production only barely made back its $3.18 million budget.

Thankfully, the film was resurrected in the 1980s, when it became customary to schedule the film around the holiday season, as it is (somewhat inexplicably) centered around Christmas day. It resonated in the late 20th century in a way it didn’t upon its 1946 release, and we can all thank television for that, as It’s a Wonderful Life works roughly as well on the small screen as it does in a theater.

Frank Capra was rightly never renowned as a visual stylist — his trademarks were mostly present through his screenplays and his actors, as he injected all of his best films with a sense of loving humanism that created pathos by depicting the struggles of the kindhearted within a cynical, often harsh world. It’s easy to deride him as idealistic, but Capra’s films never made the world seem easy for his protagonists.

George Bailey, for instance, is tested systematically throughout the film, as he’s forced to abandon his dreams in order to protect the people he cares about, staying in a hometown he longs to leave so he might save his father’s business, protect the townspeople’s homes from the predatory Mr. Potter, marry his sweetheart, and care for his children. Despite his ambitions, he puts himself last, and he’s only recognized for his goodness in the movie’s feel-good final stretch.

It’s easy to forget about the hardships that come before. For even after George Bailey unselfishly dedicates his life to his friends and a hometown he doesn’t even like all that much, it looks as though everything he fought and sacrificed for will be destroyed anyway, due to the capitalistic malice of Mr. Potter and the unchecked idiocy of his Uncle Billy — a detestable moron, and one of the film’s few flaws. This is when George Bailey, a symbol of kindness and goodness, is beaten down by the harshness of the world. 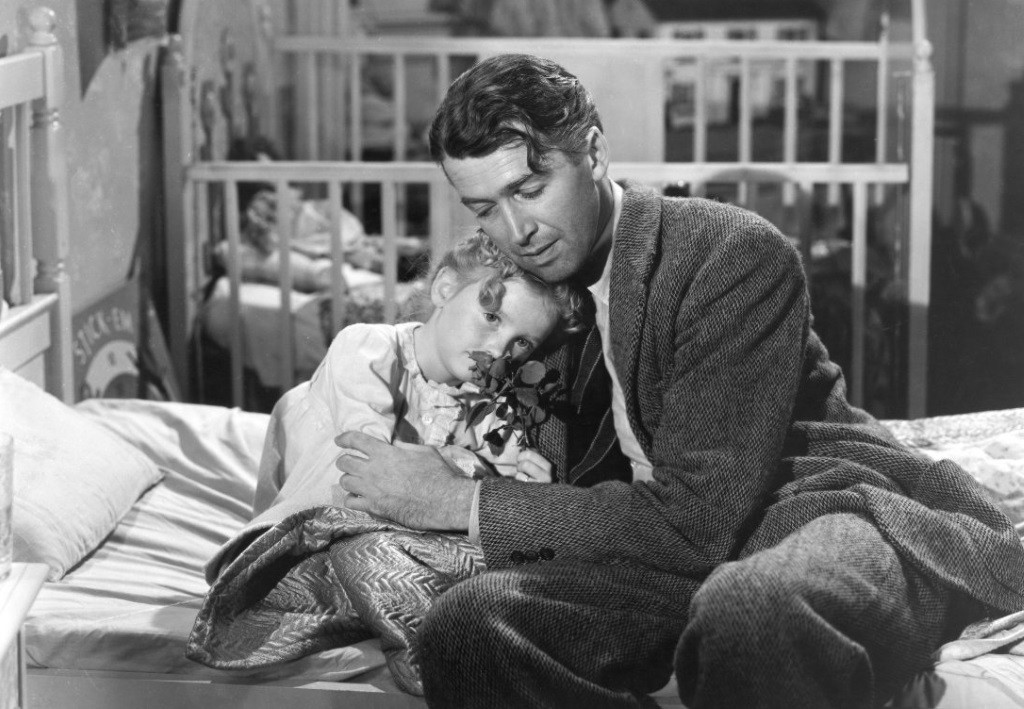 Before his folksy guardian angel can arrive to give him hope once more, Capra gives us the film’s darkest scene, a truly disturbing one wherein George verbally abuses his wife and children, blaming them for his many failures and his miserable life, which he intends to end that night by committing suicide.

It’s a Wonderful Life has become such a cultural institution by now that it’s hard to appreciate such darkness, divorced of its feel-good holiday context. It’s also hard to see how odd and unique a film it is. We most easily remember the novel third act, wherein George sees what Bedford Falls would be like without him, neglecting to realize that the rest of the film tells his entire life story before this event, using an odd supernatural framing device showing a group of stars discussing Bailey’s life until the present. His is a refreshingly normal life in many ways, as his struggles and good deeds go mostly unrewarded until the final scene’s outpouring of good will from the neighbors he’s suffered for so much.

This third act and its uplifting ending help It’s a Wonderful Life endure, making it easy for TV networks and casual viewers to revisit the film with each holiday season, but it doesn’t make it great. Many things do — from the great, modest performances from Stewart, as well as Donna Reed and the affable Henry Travers to the world-building that makes one feel as though they know the sights and the people that populate Bedford Falls.

It’s greatest strength, however, is its thematic richness. Rather than focusing on loftier ideas, Capra uses George Bailey’s mostly unspectacular story to evoke the questions we all have about our own lives — should we chase our dreams, or should we stay and care for our friends and families? Do we make our own decisions about the lives we live, or are we forced into them by external forces, as George often seems to be? How can we take responsibility for our choices, and how can we avoid the most nagging question of all — what if? Is it truly right for George to sacrifice his own needs and desires for those of others? Is any of it worth it, especially when things go wrong and it seems as though everything he devoted his life toward will turn to nothing?

The film arrives at an optimistic conclusion, with the whole town gathered around George to give back and to sing a round of “Auld Lang Syne” together, but it’s a hard-earned reward that acknowledges the many sacrifices we all make to create the lives we have, and the uncertainties about our own choices we all face, no matter how it all turns out.

The film acknowledges the monumental struggle it takes to live through an ordinary life in a way few other works of art can. It’s a Wonderful Life is often labeled as an old Hollywood film, or as a Christmas film, or a film about postwar America. But this does a disservice to the film — it isn’t a seasonal film about the holidays, or about angels, or about George Bailey. It’s a universal film about the lives all of us lead.