When Jackie Kennedy and John F. Kennedy entered the White House in 1961, they were a vibrant young couple who were stepping into the spotlight just as America was transforming into a more liberal and somewhat accepting space. The couple was a shining and stunning example of where the country was headed and what the future could look like.  Though the Kenendy’s reign in the White House and a promise for a new America was all but stamped out in 1963, when JFK was assassinated, during those three years, Jackie made considerable strides to transform the White House.

These are all the ways that she changed the cold and formal White House into a home for her young family and America.

When Jackie Kennedy thrust open the doors to the White House in 1961, she was greeted with the relics of the Truman era. The White House had been furnished with replicas of period pieces coated in modern fabrics. This was all done just before 1952 before funds dried up.

Jackie, like many others, felt that the choices were garish and appalling. She thought they did not befit the heritage of the home of the President of the United States. In an interview with Life Magazine in 1961, she said, “All these people come to see the White House and they see practically nothing that dates back before 1948.”

Next: No money for redecorating

President John F. Kennedy and Jacqueline Kennedy, right, pose for a photograph with guests before a dinner in honor of the President of Peru, left, at the White House September 19, 1961 in Washington, DC.| Kennedy Library Archives/Newsmakers

By the time the Kennedys stepped into the White House, America was in the throes of the Vietnam War, and there was very little money to redecorate. However, because of her prestigious upbringing and her appreciation for authentic period pieces and the fine arts, Mrs, Kennedy was desperate to use her limited budget and restore the White House.

The first lady made it her mission to make the White House into a grand place.

Next: Making the White House a home

When JFK was sworn into office, he had two very young children, Caroline Kennedy, and John F. Kennedy Jr, who were both under the age of five. Because of her children, Jackie Kennedy wanted to make sure that the White House was as family friendly as possible.

To embark on her new project, Jackie enlisted interior decorator and socialite Dorothy Mae “Sister” Parish to re-do several of the White House’s family rooms and several others. The women also decided to convert the Prince of Wales suite into a Private Dining Room and Family Kitchen for the first family.

Next: Exchanging neutrals for bolds

Jackie Kennedy was quite the fashionista and she understood how important color was for the mood and tones of rooms. As a result, she stuck to a specific color palette for the rooms in the White House. Jackie chose warm tones of strong colors like blue, yellow and red for the paint and the decor. She also used geometric symmetry in the positioning of furniture to enhance the magnificence of the arched windows and architectural paneling.

Next: Making everyone feel welcomed.

Mrs. Kennedy was determined to strip away the stiff and informal interior of the White House so that everyone from tourists to state dinner attendees felt welcomed and appreciated.  She was truly a gracious hostess. She transformed the staterooms so that everyone would feel comfortable despite the prestigious surroundings.

Next: A clever idea

The Kennedys wanted the American public to be as invested in the White House as they were. Therefore, they decided to create the White House Historical Association to help publicize the heritage of the president’s house. Through the association, the White House was classified as a museum so that it would be both preserved and so that the house could accept gifts which would combat the need for a more extensive decorating budget.

Mrs. Kennedy enlisted Henry DuPont, a well-connected collector of Americana and Stéphane Boudin, a respected Parisian designer of the House of Jansen, to help acquire antiques from donors.

Next: Keeping up with the era.

7. A new standard for dining

During their time in the White House, the Kennedys hosted everything from tea parties to state dinners. One of Jackie Kennedy’s main requirements in the State Dining Room was having a fully stocked bar, something that was never done before.

She also staffed butlers who acted as bartenders. If you were a fan of Mad Men, then you know how much folks loved their cigarettes and drinks during the ’60s. The late first lady spared no attention to detail. She also had ashtrays placed throughout the dining room for smoking which was something that had never been allowed for in the past.

Next: Putting a personal touch on things

As a mother of young children, Jackie didn’t miss one single detail, especially when it came to making sure that her guests felt as warm and as comfortable as possible. In the past, the rooms in the White House were meant to act as showpieces instead of places that could be lived in.

Jackie ripped the proverbial plastic off the couches and made sure that each room would be a breath of fresh air for family, friends, and guests. During the winter, she made sure the fireplaces remained lit, she got rid of receiving lines at formal events, and she made all of the floral arrangements in the White House look thoughtful and inviting instead of the stiff expensive pieces that could traditionally be found there.

Next: Throwing out old traditions

Jacqueline Kennedy hosts a First Lady’s reception April 19, 1961 for wives of members of the American Society of Newspaper Editors at the White House in Washington D.C. | Kennedy Library Archives/Newsmakers

Though she was a traditional woman in many ways, and she and JFK had a rather traditional marriage, Jackie made sure her voice was always heard, even when it came down to the smallest detail. After dinner men and women usually went their separate ways with men typically getting up from the table and retreating into another room for drinks, cigars, and business talk.

Jackie didn’t want that to be the standard in her White House. She began inviting the men and women to have coffee together after dinner.

If you’ve ever been to a fancy dinner with tons of cutlery and crisp white table clothes, then you know how intimidating that can be even if you have good manners. Jackie didn’t want anyone to feel out of sorts when they visited her White House.

She made sure that the table settings weren’t too fussy or overdone. She got rid of bread-and-butter plates and went for a simple setting that included a folded napkin and a place card.

Next: Keeping her guests in mind

The President and Mrs. Kennedy attend a dinner May 5, 1962 for President Houphuet-Boigny, of the Republic of Ivory Coast, Africa at the White House in Washington DC | Kennedy Library Archives/Newsmakers

With so much thought put into her dining rooms, Jackie also cared about what would be served to her guests and her family. Though she didn’t have to, Jackie always considered the price of certain food items, if they were in season, and if they were readily available.

She also refused to be wasteful, requesting that the White House only serve four-course dinners instead of the traditional six. When she had international guests, she made sure they were as comfortable as possible when it came to choosing menus from their culture or personal preferences.

Next: Making the holiday season special

12. Christmas with the Kennedys

Jackie and president Kennedy with their tree | Photograph by Robert Knudsen, Office of the Naval Aide to the President, in the John F. Kennedy Presidential Library and Museum, Boston.

Like everything else she did at the White House, Jackie Kenndy also put her own spin on the holiday season. In 1961, she began the tradition of selecting a theme for the official White House Christmas tree. That year, the tree that she placed in the oval Blue Room was modeled after Petr Tchaikovsky’s Nutcracker ballet.

In 1962, she had a children’s themed tree placed at the North entrance. The tree had brightly wrapped packages, candy canes, gingerbread cookies, and straw ornaments made by disabled or senior citizens from across the United States.

Next: Switching things up 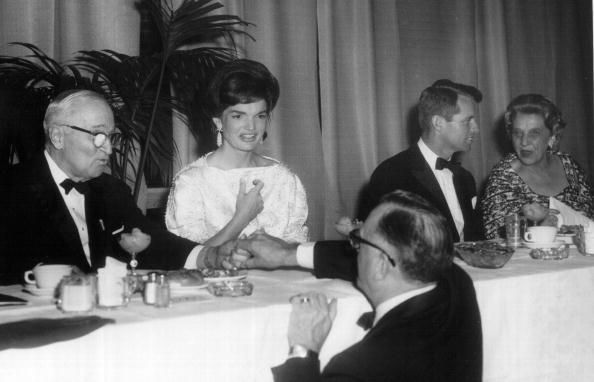 Jackie Kennedy took things way beyond basic redecorating and hosting changes. She also had a Situation Room constructed, The White House’s Rose Garden was re-landscaped, and she had antique wallpaper panels that depicted scenes from the American Revolutionary War installed in the new private dining room.

Most importantly she teamed up with JFK’s father Joe P. Kennedy and had a scenic mural installed on the side of the swimming pool. Sadly, the White House swimming pool is now the Press Briefing room.

Next: A surprise for Jack

One of designer Stéphane Boudin’s biggest undertakings was redoing the Oval Office. However, the Kennedys were in Dallas where JFK was killed when the office was finally completed. Before Mrs. Kennedy returned to the White House, President Kennedy’s personal effects (including the Resolute desk, which Johnson switched out for another he preferred) were removed.

The former first lady had redone the office as a surprise to her husband. Unfortunately, when she walked in, she got quite the shock. The old carpet had been blue-grey, but when she returned the carpet was blood red.

Next: Welcoming America into her home.

Mrs. John F. Kennedy and Charles Collingwood sit on a bench below the painting of President George Washington, during the televised tour of the White House, February 1962| Hulton Archive/Getty Images)

Though Jackie Kennedy was a relatively private person, much of the allure of the Kennedys was their apparent transparency and openness. Jackie Kennedy exuded warmth and confidence, and the White House Historial Association reached peak epicness on Valentine’s Day 1962 when CBS aired a special of Mrs. Kennedy giving a guided tour of the White House.

More than 80 million people tuned in and Jackie was awarded an honorary Emmy for her contribution to television.

Read more: An Inside Look at the Stunning Homes of the Kennedy Family