How Long Did George H.W. Bush Own His Service Dog Sully? What We Know About Sully’s Relationship with Bush

Sully — a yellow lab with good manners and a big heart — helped the 41st president make the most of his final months. Bush passed away on November 30, 2018. His wife, former first lady Barbara Bush, died earlier this year.

Here’s everything we know about one of America’s best-known service dogs — including where he’s headed now that he’ll no longer be working for his former owner.

Everything we know about Sully, George H.W. Bush’s service dog

Sully received his training through the nonprofit organization America’s VetDogs.

The organization seeks to “provide enhanced mobility and renewed independence to veterans, active-duty service members, and first responders with disabilities, allowing them to once again live with pride and self-reliance,” according to its website.

Though he wasn’t with his former owner for long, Sully and the former president clearly formed a strong bond over a short period of time — as many service dogs and their human companions do.

The very good boy paid respects to his owner by quietly laying in front of his casket, with only a few words to serve as a goodbye: “Mission complete.”

Sully has his own Instagram account if you need to take a few minutes to scroll through some adorable dog pics.

How long was George H.W. Bush’s service dog with him?

The yellow Labrador retriever joined Bush in June 2018. At the time Bush was in a wheelchair due to Parkinson’s disease and was dealing with health issues in the months following the death of his wife, former First Lady Barbara Bush.

It was Sully’s job to help the former president open doors, pick up items, and call for help, according to USA Today.

Former President George H.W. Bush first introduced his new companion to the world via Twitter, sharing a photo and writing: “A great joy to welcome home the newest member of our family, ‘Sully,’ a beautiful — and beautifully trained — lab from @AmericasVetDogs. Could not be more grateful, especially for their commitment to our veterans.”

Sully’s social media presence was — and still is — adorable. But it also serves a greater purpose: To raise awareness of America’s VetDogs and the services they provide to veterans seeking to live full, independent lives.

What happens to Sully now? 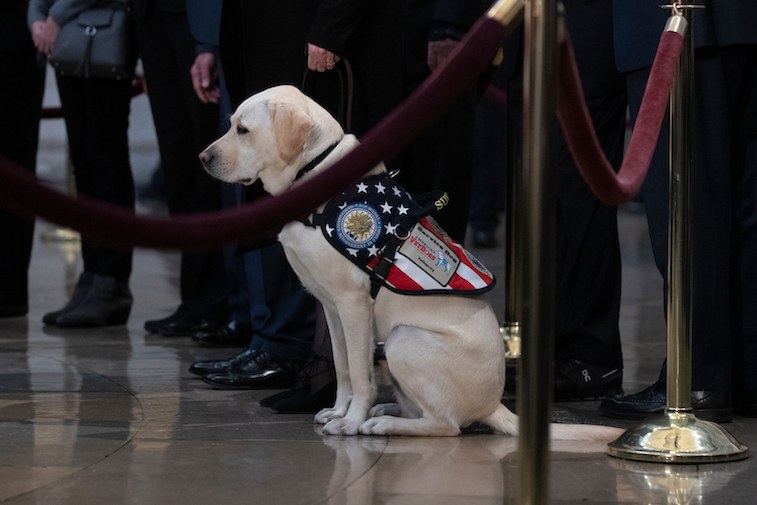 If a service dog is with their owner for a long time, it’s common for them to retire but still remain a part of the family even if they’re no longer performing the services they were trained to do. Sully is still a young lab, and won’t be hanging up his harness anytime soon.

Even though Sully’s latest “mission” as Bush’s service companion is now over, the skilled pup has plenty of years of service left in him.

USA Today reported that Sully will begin working at the Walter Reed National Military Medical Center in Bethesda, Maryland as part of its Facility Dog Program.

He will join other dogs in assisting wounded veterans and active duty military personnel. From what we can tell, he’s going to do a great job. Good luck, Sully!