Here’s How Many Weddings Were on ‘Friends’

Ross wasn’t the only Friends character to get married on the show (though he was the only one to do it three times). Over the course of ten years, Friends saw many characters get engaged and say, “I do.” And while some didn’t exactly work out (hi again, Ross), others lived happily ever after. Curious to know how many weddings were on Friends? From Ross to Rachel to Monica and Chandler, we share the love stories of our favorite Friends characters below. 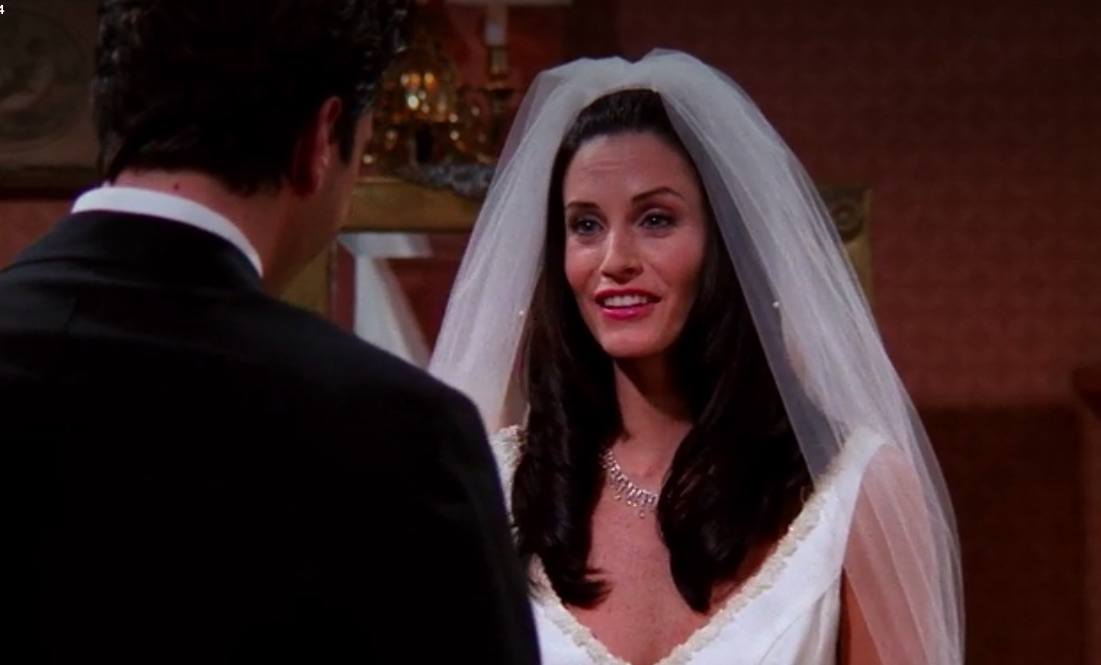 Monica and Chandler married at the end of season 7. | Netflix

Ross loved to get married — and his friends loved to make fun of him for it. While we don’t see the original wedding on the show, Ross’ first marriage was to Carol. After she realized she was a lesbian, Ross and Carol split, and Ross went on to date Rachel.

After Rachel and Ross broke up, he met Emily. Rachel agreed to take Emily (her boss’ niece) to the opera but had to cancel for her first “date” with Joshua. She asked Ross to take Emily instead, and the two hit it off. Ross and Emily ended up dating, and their relationship moved quickly. The two got engaged and planned a wedding weekend in London, where Emily is from. However, things went south after Ross mistakenly called her Rachel during his vows.

After the whole Emily mess, Ross gave up on marriage for a while. Then he and Rachel drank too much in Vegas and got married. He promised to file for an annulment but didn’t follow through with it. Rachel ultimately found out, and the two filed for divorce six months after their Vegas wedding.

In addition to drunkenly marrying Ross, Rachel also almost married Barry. The pilot episode depicted Rachel as a runaway bride after realizing that Barry (her dentist fiancé) was not the one for her. She showed up to Central Perk in a wedding dress and veil, looking for Monica.

According to the show spinoff, Joey, Rachel and Ross ultimately marry again (after the show ends).

Throughout the series, Monica dated a bit and almost got engaged twice. However, when she and Chandler hooked up during Ross and Emily’s disastrous wedding weekend in London, she finally met her match. After keeping their relationship a secret for a bit, the two went public and eventually got engaged. In season 7, Monica and Chander got married. Despite some hiccups — Joey came directly from filming a movie and officiated it in a bloody World War I costume — the wedding was beautiful, and the two lived happily ever after.

While Phoebe’s first marriage to Duncan the ice dancer wasn’t shown on the series, it was talked about a few times. Duncan was a Canadian ice dancer that secretly married Phoebe to get a green card. Although Duncan was gay, Phoebe fell in love with him and was heartbroken when he left to travel the country. He returned six years after getting married, Duncan returned to New York and asked Phoebe for a divorce. In the time he was away, he realized he was not gay and fell in love with a woman. To marry her, he needed to divorce Phoebe.

Phoebe finally gets her happy ending when she meets Mike. It turned out, her blind date gone wrong ended up being the love of her life. In season 10, Mike asks Phoebe to marry him, and they planned their wedding. However, a snowstorm on the day of their wedding prevented them from going through with the original plan. In true Friends fashion, the couple had a makeshift ceremony outside of Central Perk.

In addition to the leading characters, there were a handful of other weddings on Friends. Cousin Frannie and Stuart (Monica’s ex-boyfriend), Barry (Rachel’s ex-fiancé) and Mindy (Rachel’s best friend)Carol (Ross’ ex-wife) and Susan all got married on Friends.