How Much is Daytime TV Legend Jerry Springer Worth? 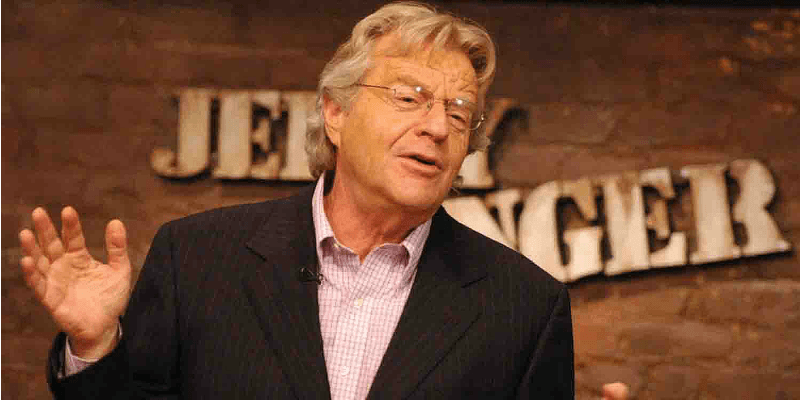 Jerry Springer is worth a lot more than you think | NBC

Jerry Springer and the end of tabloid TV

After 27 years and more than 4,000 episodes, The Jerry Springer Show is about to come to an ignominious end, reports AV News. Don’t worry, though. The former mayor of Cincinnati is slated to star in a brand new show. No, it won’t be the sort of no-holds-barred talk show that you’re accustomed to seeing. “Judge Jerry” will place the erstwhile tabloid talk host in the judge’s seat to preside over real court cases.

If Jerry Springer as a sitting judge seems like an outlandish idea, you might not know that Springer earned a law degree at the Pritzker School of Law at Northwestern University in 1968. Really. The man who hosted one of the nuttiest TV shows ever devised has an actual law degree.

He never practiced law, but Springer was an adviser to Robert Kennedy before his tragic assassination in 1968, and the man probably understands everything he needs to know to facilitate a good courtroom brawl. After all, it’s Springer’s start-a-fight-then-feign-amazement stance that makes him so popular among worldwide television viewers.

Over the decades, The Jerry Springer Show touched upon many unusual topics, including extramarital affairs, bestiality, and LGBT issues that network shows ignored. After an episode in 2014 entitled “Trannies Twerk it Out,” the TV host agreed with gay and lesbian activists that the term ‘tranny’ should be removed from future shows, says Mental Floss.

Springer, who may have hosted more LGBT-friendly shows than anyone in the decade, told Huffington Post “I didn’t know it was offensive to them (transsexuals) and I’m not interested in offending people, so obviously I’ll just change the term.” And, he did.

After a 17-year run in the windy city of Chicago, The Jerry Springer Show packed up shop and moved to Stamford, Connecticut in 2009. Although some community members evinced outrage at the show’s arrival, most locals welcomed the Stamford Media Center, which was constructed with funds provided by the Springer show.

Steve Wilkos, who served as security guard for The Springer Show for more than 50 episodes, got his own spin-off show in September 2007. The Steve Wilkos Show professes to help victims of bullies, cheater, and liars. If you’d like to be considered as a guest on the show, call 855-515-0001 and tell producers your story.

A musical version of The Jerry Springer Show made its debut in London in 2003. After a three-year run, the irreverently operatic show went on the road throughout England before landing in Las Vegas in 2007. In 2008, Hollywood heavyweight Harvey Keitel portrayed Springer during a two-day run of the play in New York City. Actors and crew received less than glowing accolades for their portrayals of God, Satan, and Jesus Christ, explains Mental Floss.

Springer’s fame brought him a substantial income over the years that his show was in production. Born to a bank clerk and a shoe store owner in a London subway tube in February 1944, Gerald Norman Springer currently boasts a net worth of more than $75 million, according to The Richest magazine.