Twenty years ago, a 30-year-old high school drop-out named Quentin Tarantino walked away from Cannes with the Palme d’Or, the most prestigious film honor in the world, and overnight everything changed.

Tarantino ushered in the VCR Generation of filmmakers — young men and women (though it was mostly men) in their late-20s to early-30s who worked in video rental stores and grew up consuming movies on tapes, absorbing prodigious amounts of film knowledge without film school, without picking up a film textbook. They learned about movies by watching movies, and those scrolling tracking lines on bulbous tube television were like the podium behind witch their professors — Hitchcock, Scorsese, De Palma, Fellini, Godard, Kurosawa, the masters of world cinema.

Quentin Tarantino has, against the odds, become a ubiquitous presence, so it’s a little difficult ascertaining just what, exactly, made Pulp Fiction unlike anything that came before it. (He’s the most studied filmmaker in the UK.) Tracing its influence is at once easy and infuriating, since its influence has slipped and seeped into every crevice of seemingly every American film in the last twenty years. Tarantino brought film theory to the MTV Generation.

The amalgamation of New Wave music, New Wave movies, disco, death, gimps and vulgarities, and the basso profondo of Ving Rhames shouldn’t have worked — it should have been a Frankenstein mess with its unsightly seams glaring in the bright light of the big screen. But Tarantino draws attention to the seams, like a biology professor tracing the scars of a recent dissection in front of his lecture hall; he’s usurping expectations of American audiences by injecting shots of European adrenaline — the good stuff, from Amsterdam.

Americans, simply put, were not watching Italian or French films in 1994. There was no Netflix on which you could stream them, no YouTube, no Amazon. You had to seek out films knowingly, since no one was advertising Michelangelo Antonioni’s La Notte or Francois Truffaut’s The 400 Blows. After Pulp Fiction, and the interviews, and the reviews, and the swell of chit-chat, people did seek out those once-obscure European films.

Pulp Fiction made the term “postmodernism” a staple of college dorm room debates, the film’s insolence to structure and screw-you attitude to established convention fueling a million conversations amidst the menix of pot fumes and set against the backdrop of this poster, which surely every college freshmen boy had: 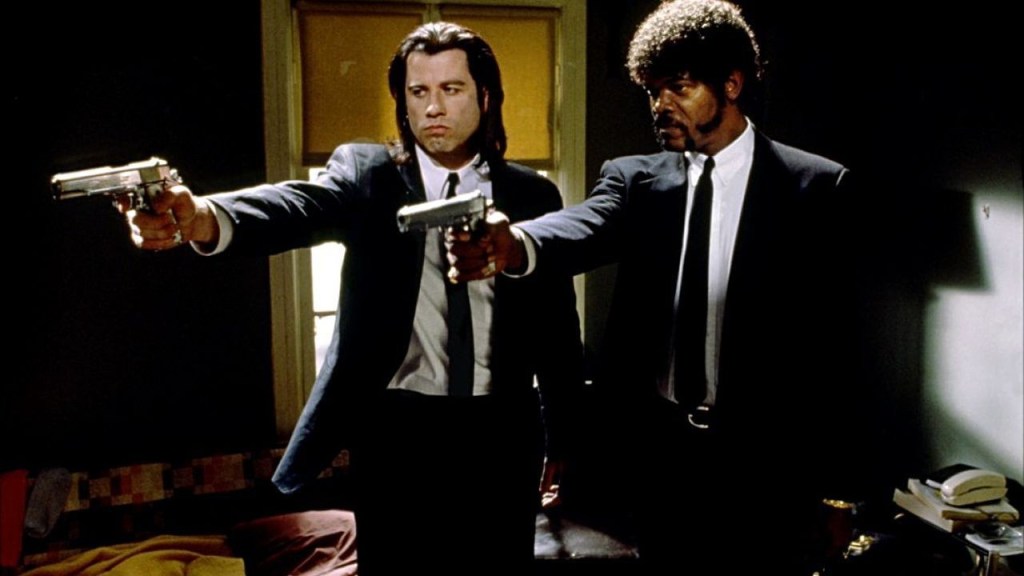 Roger Ebert called Pulp Fiction the most influential film of the ’90s, a film “so well-written in a scruffy, fanzine way that you want to rub noses in it — the noses of those zombie writers who take ‘screenwriting’ classes that teach them the formulas for ‘hit films.’” It costs $8.5 million to make and made over $200 million at the box office, making it the most successful independent film of all time up to that point.

Tarantino’s film, a brazen, blazingly original work of art, marked the arrival of a young new talent and resurrected the word auteur. Tarantino, like his idols Godard and Sergio Leone, suffused his film with singular style and laced it with allusions and references to other films, but in film language: the jarring jump-cuts of French New Wave that render time and narrative nebulous; the use of popular music in place of a traditional score; the careful casting of veteran character actors as supporting players (i.e. Scorsese regular Harvey Keitel as The Wolf, a clean-up artist who fixes other people’s mistakes); long, slow scenes that end with sudden bursts of astounding violence. The film moves far slower than most seem to remember, but characters spit dialog with the caffeine-addled ferocity of their progenitor. (Tarantino claims to have sucked down twelve cups of joe a day before embarking on casual, pot-steeped jaunts across Amsterdam.)

Pulp Fiction is often called a “violent” film, and many in the media decried it after it came out, saying it glorified violence. But the film isn’t really that explicitly violent; it’s innately violent because the nature of its premise, “honor among low lives” according to Leonard Maltin, demands violence. These are violent characters living violent, fleeting existential lives, set on an intertwined series of paths that are fueled and ended by violence.

Pulp Fiction made violence trendy, so to speak, and engendered a wave of films that thought the poetic humor of Tarantino’s film was rooted in violence. Not since 1971, when Straw Dogs, Dirty Harry, and A Clockwork Orange came out in rapid, rabid succession were the multiplexes so replete with overtly violent movies. All of these ersatz Tarantino films missed the point, though. Nonlinear narratives and zippy, irrelevant, irreverent dialog and violent thugs offing violent thugs do not a masterpiece make; antipodal to Tarantino’s synthesizing of his vast influences into one unique entity, those who wanted to be Tarantino (Guy Ritchie being perhaps the most successful, box office-wise) simply copied Tarantino instead of channeling the feeling of the films he was channeling.

When Samuel L. Jackson and John Travolta talk about foot massages just minutes before they blow away some low-level criminals in a squalid apartment, Tarantino is showing us the humanity lurking behind the tough-guy veneer, while simultaneously showing us how tranquil and nonchalant they are, knowing they’re about to shoot some people, and teasing the mythos of their unseen boss, Marsellus Wallace, who threw a guy out a window for touching his wive’s feet.

Pulp Fiction also kick-started the careers of most of its performers. It’s also easy to forget that when Pulp Fiction came out, John Travolta was in a twelve-year slump. His last monetarily successful film, Urban Cowboy, came out in 1980. The next year he starred in Brian De Palma’s great Blow Out, one of Tarantino’s favorite films, but the movie couldn’t find an audience and it bombed. Pulp Fiction revitalized Travolta’s career, in what was the greatest resurgence of a faded star until the McConaissance.

Bruce Willis was also in a slump; after his break-out turns in the oft-forgotten but absolutely brilliant show Moonlighting and the monumental Die Hard, Willis starred in the bombs Look Who’s Talking Now, Bonfire of the Vanities, the Golden Raspberry-winning Hudson Hawk, and North. After Pulp Fiction he landed roles in 12 Monkeys, The Jackal, The Fifth Element, The Siege, and The Sixth Sense, probably his best performance to date.

Ving Rhames got type cast as a tough guy with a deep voice, but he had a great supporting bit in Scorsese’s eternally underrated Bringing Out the Dead in ’99 and an award-winning turn as Don King in Don King:Only in America, for which we can all be grateful.

And Samuel L. Jackson…well, he’s been doing alright for himself.

The movies that Tarantino has obviously influenced, for better or worse, is vast: Get Shorty and its sequel Be Cool; Sin City (which he guest-directed a scene of); Revolver; Heist; Out of Sight and The Limey; Smokin’ Aces; 3,000 Miles to Graceland; Feast; In Bruges (probably the best film to take its cues from Tarantino, since, like Tarantino, writer-director Martin McDonagh is self-aware enough to have fun with his influences and tonal fluctuations); Swordfish; The Usual Suspects; and the list goes on ad nauseam. But Tarantino’s film, the original amalgam of film history, remains unique. It stands alone atop the pantheon that Tarantino created.