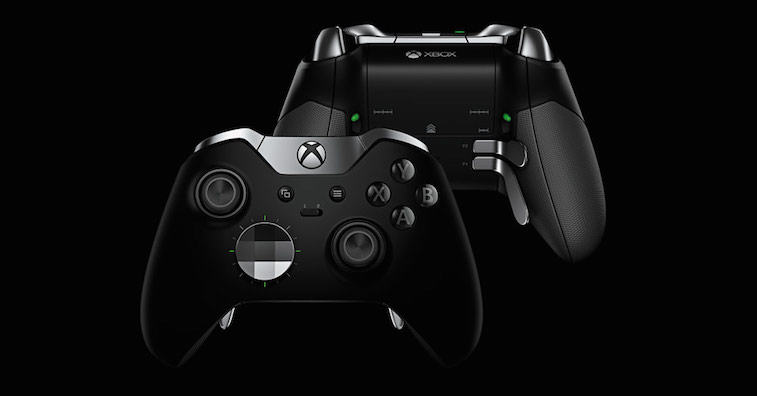 We’ve all probably been told at one point or another that “playing video games is bad for you,” and a lot of that is a big video game myth. We’ve been warned against the health and social consequences of excessive gaming all our lives, and because we don’t believe people, don’t care, or just reject the fancy-pants opinions of non-gamers, we keep gaming.

And we aren’t going to stop gaming until we’re physically stopped somehow. But even as we keep gaming for hours on end, it doesn’t have to be all doom and gloom. There are some ways you can keep gaming a bit more on the healthy side.

Whether it’s avoiding certain aspects of gaming that are detrimental to your health or finding ways to incorporate healthy activities in with your gaming, there are plenty of ways to both reduce the negative effects of gaming and invent positive ones. Here, we’ll look at both sides of the coin, and hopefully you’ll be able to find even more for yourself.

Watch out for your eyes

You need those bad boys working properly if you want to remain at the top of your game. Unfortunately, spending a lot of time staring at a screen doesn’t really help keep your eyes working optimally. According to WebMD, Computer Vision Syndrome is the result of spending several hours in a row staring at a screen, and it’s like carpal tunnel for your eyes.

Looking at a screen with its hard-to-perceive flicker, ever-changing images, and contrast can get really hard on the eyes. It can result in blurred vision, double vision, and dry eyes, all of which will be detrimental to your gaming skills. The blue light emitted by LCD screens can also be harmful when viewed late at night, and may keep you from sleeping as well. Being drowsy after a night of bad sleep is probably not going to help you pwn noobs.

What’s the fix that will allow us to keep gaming? The Mayo Clinic suggests following the 20-20-20 rule, which requires you to look at a point 20 feet away for 20 seconds every 20 minutes. This gives your eyes a break. If you’ve got more time between a match or waiting for a loading screen, close your eyes, as well. Another thing you’ll want to do is remember to blink while you’re gaming.

You might not realize it, but you’re probably not blinking a whole lot while you play. That dries your eyes out, and those goobers are meant to be wet. Finally, if you insist on gaming late at night, you should try to adjust the screen’s color temperature to reduce the blue light. This might be harder on a TV, but for a computer, you can use a program like Flux to lower the screen’s color temperature after the sun sets.

Stop sitting so much 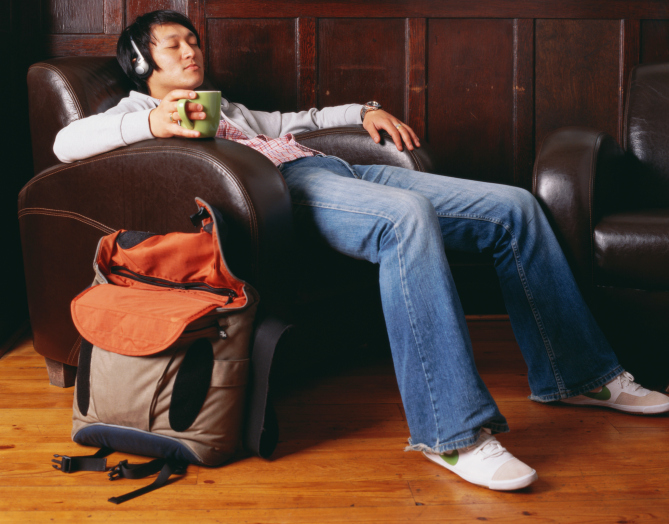 Sitting isn’t a winning habit. As reported by Harvard Health Publications, many studies have been linking excessive sitting to a range of diseases, including diabetes and heart disease. So it goes without saying that long gaming sessions aren’t doing you a whole lot of good, even if they’re doing your in-game character a lot of good.

“But sitting is how you play video games!” Sure, that’s one way of looking at it. But that’s a truth worth questioning. The Wii certainly questioned that notion. There were plenty of great games for Wii that were easily set up for playing standing, if not even better played standing up. Zelda: Skyward Sword is a great game to play standing, as all the sword swinging makes you feel that much deeper in the action. For other games, you can use a standing desk.

If you don’t spend a lot of time standing, it might painful on your feet at first, but better your feet now than your heart later. It’s easy to play standing for consoles. For computers, it might be harder and could be costly, but setting up a high screen and low keyboard, or using a console controller, isn’t impossible. Bonus points if you jog in place while you make your character run all over the place.

If it’s currently out of the question for you to play standing up, at least be sure to stand up when you’re practicing the 20-20-20 rule. You can also try sitting on top of a yoga ball. 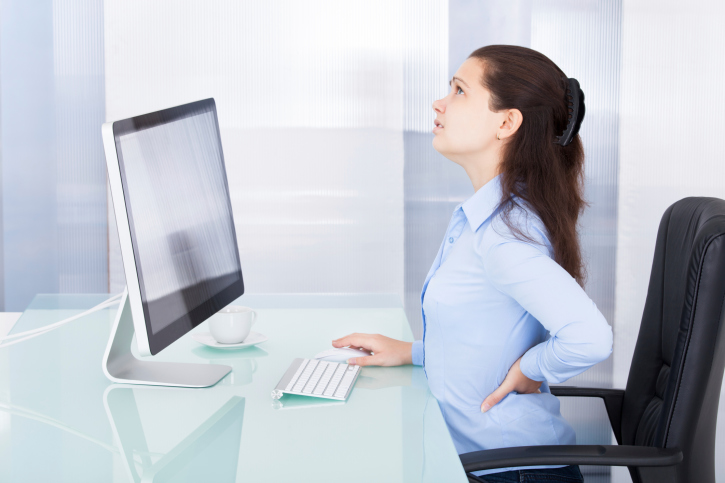 Whether you’re sitting or (hopefully) standing while you game, you should try to remain conscious of your posture. Sure, we all want to really lean in and shove our face right into the action on screen, but that’ll probably entail bending our neck awkwardly, bowing in our shoulders, and slouching our backs. This isn’t going to help your bones or muscles, and you could regret it when you get older.

Try pulling your shoulders back, for starters. If you’re on a computer, this might mean getting your keyboard and mouse closer to you so you don’t have to reach out for it. Holding your shoulders back should help you keep your back straighter, though you’ll still have to make some effort not to slouch.

To help you keep your head up, try to keep the screen at a good level, aligning the top of the screen with your eyes so that a line between the two would be parallel to the floor. Sorry, no shortcuts on this one for people who want to half-commit. Suck it up and straighten that spine. Your body will thank you if no one else does.

Watch what you’re doing with your hands 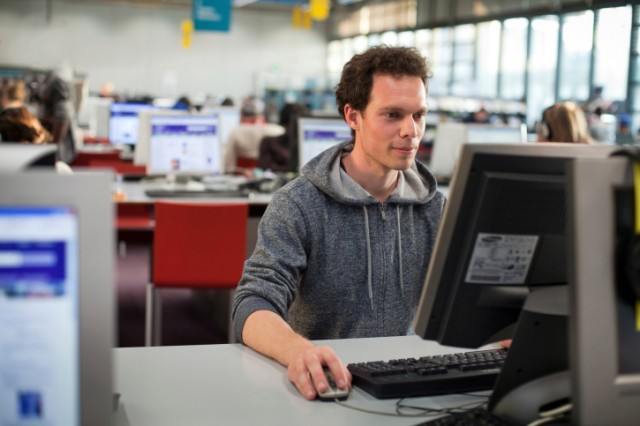 Resting your arm on the desktop | Source: Thinkstock

Holding your hands and arms in particular positions, and the repetitive motions involved in gaming may cause tendinitis, carpal tunnel syndrome, and general muscle pain and cramps. If you’ve gamed plenty, you’ve probably already felt some of these pains.

Keeping your wrists bent, repeating the same motions for a long period of time, and resting your forearms on surfaces can be contributing factors to carpal tunnel syndrome, according to KidsHealth. Squeezing your controller or mouse tightly might also give you hand cramps.

So, what should you do? Placement is key. With your arms down, bend your elbows 90 degrees (remember, to keep your shoulders back for your posture). Here’s where you’ll want to keep your hands. If you’re holding a controller, hold it from this position, and make sure your wrists are not bent in any direction but extending straight from your forearms.

If you’re using a mouse and keyboard, make sure they’re close enough to reach from this position, and low enough so that your forearms remain parallel to the floor and your wrists can stay straight. And be absolutely sure that your forearms aren’t resting on on the edge of a desk, or you’ll just be asking for regrets. (Hint: The guy in the picture is doing it wrong.)

Try not to squeeze your mouth or controller too hard, and stretch and massage your hands when you’re doing your 20-20-20 to help keep them from cramping.

Make up for your in-game failures

OK, so maybe gaming gets our heart rate up. There are those tense moments when our heart is pumping like mad because we have 10 seconds to defuse a bomb and we know there’s an enemy nearby just waiting for us to pull out our bomb kit so he can kill us. Maybe that counts as cardio … maybe. But for those of us who don’t think that counts, there are some other creative ways to get active in conjunction with your gaming.

One workout game works especially well with online competitive games, or any game that keeps track of your stats. If you’re playing a death match, you can pick a workout (a push-up, for instance) and for every time you die, you can do one rep either while you wait to respawn or all at the end of the match. If you’re a total noob, or playing a game in which you’ll day way too many times even while playing well, you can do reps based on your deficit from a 1.0 kill/death ratio.

So if you get 50 kills and 60 deaths, you’d do 10 reps. If you’re too good for that, use your deficit from a 2.0, 3.0, or whatever K/D ratio you want. Not only will this get you up and moving throughout your gaming session and get you a little extra muscle, but it’ll also encourage you to improve as a gamer, because after a while, you’re really going to want to stop having to do so many push-ups, squats, burpees, or whatever exercise you choose.

Other examples would be doing some exercise each time you have to reload a checkpoint, or perhaps every time you’re spotted by an enemy in a stealth game. The options are pretty much endless, so get creative and see what works for you. Just try not to sit hunched over every day, playing video games from midnight to dawn without blinking once.

Shoot me a tweet if you come up with any clever gaming workouts of your own.