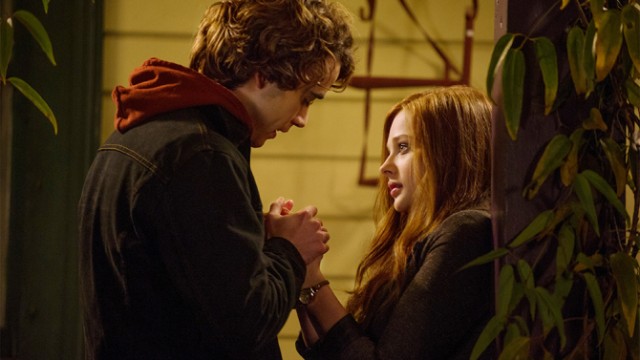 If I Stay is hitting theaters this weekend and it looks like the YA film adaptation is set to make a significant impact. According to Box Office Mojo, the movie, based on Gayle Forman’s novel of the same name, will likely wind up winning the box office over other new releases, including the long-awaited sequel Sin City: A Dame to Kill For.

If I Stay stars Chloe Grace Moretz as 17-year-old Mia Hall, who is left in a coma after a serious car accident that kills her parents and her brother. While trapped in that unconscious state in the hospital, Mia has an out-of-body experience during which she sees memories flash before her eyes and must eventually decide whether to wake up or give up. The tearjerker film is already spurring comparisons to another weepy but extremely popular YA big-screen adaptation from earlier this summer, The Fault in Our Stars. While If I Stay probably won’t hit quite the same impressive numbers as TFIOS – the latter’s star, Shailene Woodley, is much better known, and novel on which it’s based on is significantly more popular — it’s still expected to draw some of the same audience.

Per Box Office Mojo, Warner Bros. is expecting the movie, which is opening at more than 2,500 locations, to garner in the high teen-millions. But it wouldn’t be surprising if the low-budget film ends up topping $20 million, given the obvious interest in the story. The novel has been climbing various bestseller lists since the debut of the movie trailer in June. Additionally, it’s one of the last movies sure to appeal to a young female demographic before the summer ends.

Meanwhile, Sin City: A Dame to Kill For is tracking to only earn around $15 million in its debut weekend. That’s significantly lower than the original 2005 installment of the franchise, which won its opening weekend with a gross of $29.1 million. The drastic decease seems to mostly be due to a failure to strike while the iron was hot. The sequel comes a full nine years after the first film, a long period that gave too many audience members the opportunity to lose interest and move on to the next interesting franchise.

If the movie performs as predicted, it will mark the third straight film from director Robert Rodriguez to disappoint. His last two movies were both follow-ups and underperformed, with Machete Kills and Spy Kids: All the Time in the World each failing to live up to their popular predecessors.

The last of the new wide releases, sports drama When the Game Stands Tall, is projected to take the fifth spot at the box office, behind Guardians of the Galaxy and Teenage Mutant Ninja Turtles. The film, starring Jim Caviezel, is based on the true story of high school football coach Bob Ladouceur, who led the De La Salle High School football team to a 151-game winning streak. The movie picks up after that golden streak ends abruptly, following the team as members attempt to pick themselves up after the shocking loss. Opening in around 2,670 theaters, the flick is expected to perform similarly to recent sports movie Draft Day, with a projected gross of earn around $9 million.