‘Independence Day: Resurgence’: What to Expect in This Sequel

Amid the fervor and excitement surrounding releases like Captain America: Civil War and X-Men: Apocalypse, it’s hard to keep track of the bevy of other films coming out soon. Sequels are now more common than original movies, so when a franchise gets its first follow-up in almost 20 years, people are bound to get hyped. We’re of course referring to Independence Day‘s imminent sequel, titled Resurgence.

The first trailer (seen above) hit YouTube in December, followed by a TV spot that aired during Super Bowl 50 (see below). Both trailers give us all sorts of insight into what we can expect from the second installment in what we’re sure Hollywood is hoping can be the next big franchise. We see some familiar and new faces alike, as Earth once again comes under threat from the Xenomorph-esque species that blew up every major landmark our planet has to offer all those years ago. Here are the details and everything you may have missed on the initial viewing.

[Update, 5/3/16: A fake news documentary has been released that recounts the events of the first movie (see below).]

1. It’s been a long time since the last invasion

The first trailer opens with a cryptic shot of clearly alien skeletons in some sort of strange, tribal setting. It’s clear that in the years since the first invasion, our culture has dramatically shifted, with remains of the aliens arranged into peculiar shrines and arrangements. This visual is accompanied by a voiceover saying “we found something out here,” so the skulls could end up being a precursor to something even bigger.

2. Yes, Jeff Goldblum is back

Reprising his role from the original Independence Day is none other than Jeff Goldblum, returning as our resident alien expert. That “something” we see hinted at in the opening moments of the trailer is apparently “something only you could understand,” followed by an immediate cut to Goldblum looking shocked. It seems logical that in the years since he first helped defeat the invaders, he became something of an authority on their technology and customs. Of course any excuse to bring Jeff Goldblum back for another gloriously awkward performance in the sci-fi genre is a good one in our book.

3. When did this become a Prometheus sequel?

You wouldn’t be remiss in thinking the super-structure featured above looks eerily similar to the alien ships seen in the Alien franchise. Clearly a fair amount of inspiration was taken from Ridley Scott’s Prometheus, to the point where the “something” Jeff Goldblum is tasked with understanding could easily be confused with the Engineer’s vehicles of choice. That aside, all we seem to know in the way of details is that a new discovery will be the catalyst for the story of Resurgence.

4. Humanity built brand new weapons based off of alien technology

It would appear as though no one labored under the illusion that our alien invaders weren’t returning for a second helping. Humanity in turn used alien technology to build their own weapons, in anticipation of the next wave of attack. It seems smart, given that we can’t imagine a society as advanced as that of the aliens wouldn’t make it a little harder to destroy their entire fleet with one computer virus.

5. The (former) president is also back

The crowning moment of the original Independence Day came in the form of Bill Pullman’s iconic speech, followed by the freaking president of the United States hopping in a fighter jet and taking on the alien invaders head-on. Pullman numbers himself among the returning cast-members, this time a grizzled, former president offering Obi-Wan Kenobi-esque advice to the younger generation of soldiers.

6. Surprise! There’s going to be a ton of CGI

It wouldn’t be a Roland Emmerich movie without millions of dollars worth of large-scale CGI and special effects. We’ll be treated to massive explosions, gigantic alien spaceships, and everything else the Emmerich playbook has to offer (hint: It’ll involve even more explosions). Now almost 20 years after the original movie, there’s tons more technology at our disposal, and you can bet Resurgence will utilize all of it.

It’s not 1996 anymore, which means humanity has of course developed fighter jets that can survive in space, as we once again go toe-to-toe with the aliens in the air. This time around, everything’s been scaled up for modern-day special effects and a budget that we imagine is astronomical. Audiences love a good space battle. To that end, we’ll be getting plenty of that from Resurgence.

8. “That is definitely bigger than the last one.”

Last time around, we saw spaceships the size of national monuments, and a mothership that dwarfed even those. Resurgence will give us a reboot featuring a ship big enough to cast a shadow over the moon, and if the scale of the trailer is to be believed, about as large as an entire country. It’s certainly not the Death Star, but it looks like this alien race is getting damn close.

Bonus: The fate of Will Smith’s character 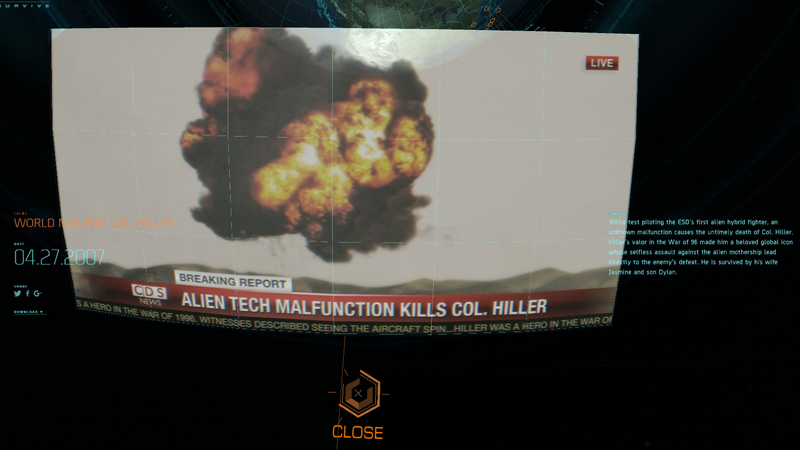 Notably absent from the trailer is Will Smith, whose character was integral to defeating the aliens we see in the first Independence Day. With Smith choosing to not sign on for the sequel, 20th Century Fox was left with the task of figuring out a way to work his character out of the story in a way that didn’t seem too forced. The studio’s attempt to do that didn’t actually come in the trailer though, instead opting to hide it somewhere else entirely. On the promotional “War of 1996″ website created by Fox, we’re told Will Smith’s Colonel Hiller died test piloting an alien hybrid fighter, when “an unknown malfunction” blew him sky high.