‘Into the Badlands’: Episode 3 Summary and What’s Coming Next 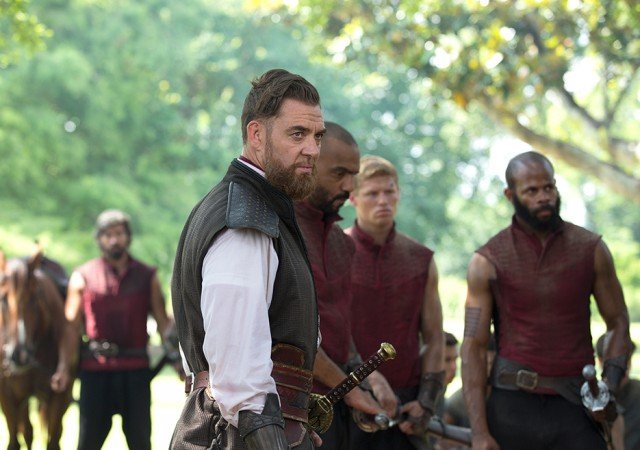 With the third episode of Into the Badlands comes a welcomed thickening, or amplification, of the show’s plot. In “White Stork Spreads Wings,” showrunners Alfred Gough and Miles Millar take a break from the martial arts-heavy portions of the show, and instead delve into Sunny’s (Daniel Wu) love life, M.K.’s (Aramis Knight) ambition(s), Quinn’s (Marton Csokas) illness, and Ryder’s (Oliver Stark) past.

And it should be noted that each addition to the plot-line helps the show’s overall authenticity. While fantastical, the show needed a few more narrative threads to be weaved together, and “White Stork Spreads Wings” helps with that conundrum.

The episode, as usual, is a pleasure to watch. The production values are very sound, and ItB is one of the neatest shows to look at. Perhaps it’s because of the half-futuristic, half-historic images that are juxtaposed, and the imaginative qualities that are attached to them — or perhaps the costumes, scenery, and alignment (cinematography) just mesh so well together that the show stands out above some others of similar ilk.

Going into the third episode, there were some plot-holes that needed to be addressed, and these pertained mostly to the female characters: Lydia (Orla Brady), Jade (Sarah Bolger), Minerva aka The Widow (Emily Beecham), and Veil (Madeleine Mantock). The questions pertained to the characters’ overall efficacy, or whether they deserved a place in the show. Up until “White Stork…”, it’s hard to say that Veil had earned her keep. Afterward, however, it is clear — for her complacency is apparent, but her resilience is admirable. As for Lydia, it’s easy to see that she is the matriarchal figure, but before “White Stork,” she hadn’t done much to catch viewers’ eyes. The same could be said for the two-timing Jade. The Widow has earned her keep as a fighter, but her background still needs to be expounded further.

What “White Stork” does well is mix action with narrative, and while many different angles are exhibited, Gough and Millar do not over-saturate the content with knives and swords. It would be easy for ItB to go off the rails, to lean on the kung fu; but then, many of the scenes would be superfluous. With “White Stork,” the larger through-line is added to quite nicely.

There is all this talk of plot, but what exactly happened in the third episode of the show’s first season? Click forward to find out. 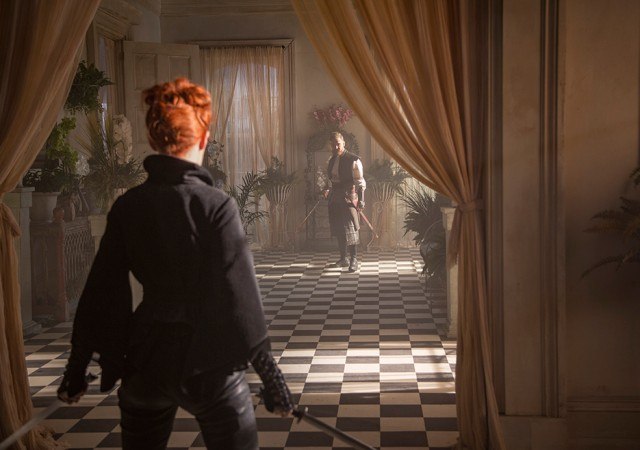 The episode begins with a bang, as Baron Quinn has declared war on The Widow and has trespassed on her territory to end her life. The move is somewhat impetuous, for The Widow is a formidable opponent. Nonetheless, Quinn saw the attack on Ryder as an affront, and so he’s come to settle the score…

Quinn’s clippers break through the line, and enter The Widow’s mansion, and Quinn himself has the pleasure of busting into her room. There, the two fight a neat, and somersaulting hand-to-hand battle. If there’s one thing this battle isn’t, it’s protracted. Quinn “cuts” right to the point — and is about to finish The Widow when he is afflicted by another massive headache. In turn, before the The Widow can turn the tables, Sunny comes to the rescue. The Widow sneaks off, and Quinn and his assailants sneak back to the fort.

Here, Quinn witnesses how badly Ryder’s recovery has been going. After being gagged by the chains in episode two, it appears he has some sort of brain damage. But, because Quinn killed the doctor, there is no one to help. Jade, however, manages to convince Quinn that Veil can help save Ryder (although it’s tough to say how much he really cares).

Jade goes to Veil’s place of work, where she makes “mimics,” or prostheses. Jade — of similar age to Veil — convinces the latter figure to come back to Quinn’s mansion to save Ryder. She does so, and discovers that she has to penetrate Ryder’s skull with a metallic device to reduce the brain swelling. After a bloody intervention, she helps save the heir-apparent. Quinn seems to want to call on Veil again. 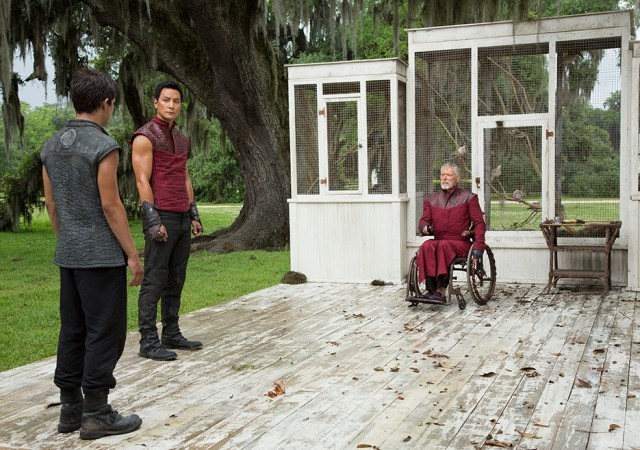 Sunny also has a busy episode: He takes a hold of a book about Azra that M.K. managed to get his hands on, and discovers that he truly must make M.K. his colt. If he’s to stick to the plan, he’ll train M.K. enough to protect Veil, and the two (sans Sunny) will go to the magical free city of Azra.

In order to help train M.K., Sunny brings him to fight the wheelchair-bound ex-clipper Waldo (Stephen Lang). The elder teaches M.K. a lesson — effectively dropping him not once, but at least twice. It is here, perhaps, that M.K. learns his journey will be no easy one.

Quinn soon asks Sunny to investigate the perpetrator behind The Widow’s earlier attack (the middleman, of sorts). Once Ryder awakes, Quinn is able to learn that a blonde woman, Angelica (Teressa Liane), was responsible. Sunny goes to pay her a visit with M.K. Here, Angelica decides to go to the grave before telling Sunny anything, and plunges off of a high balcony. Watching down below is M.K. and Tilda, who is forced to run back to her own territory.

Then, talking with Ryder, Lydia tells her son that he is not baron material. While Ryder is mad, a part of him knows she is correct. She had also revealed earlier in the episode that nomads once took Ryder and injured him physically and mentally — and that is probably why he is so snappy and power-hungry.

At this point, it is safe to say that war is inevitable. In one last ditch effort to pair himself up with another baron, Quinn asks Sunny to coordinate a meeting with Baron Jacobee’s regent, Zypher (Ellen Hollman), to discuss a collusion against The Widow. Here, Zypher tells Sunny that he could help Jacobee by killing Quinn (and she asks Sunny to sleep with her). Sunny remains “loyal” and refuses. She says she will attempt to talk to Jacobee.

The episode closes with Veil being greeted by Quinn. At first she believes he is there exclusively for sex. But it becomes clear that he wants her to help save him — as in, remove his brain tumor!

The larger war is about to be waged. Barons may be pitted against barons, and foes will emerge from all corners of the badlands. But will M.K. and Veil be able to escape to Azra? Will Sunny join them? Will Quinn survive?