‘Into the Badlands’: Episode 5 Review and Spoilers 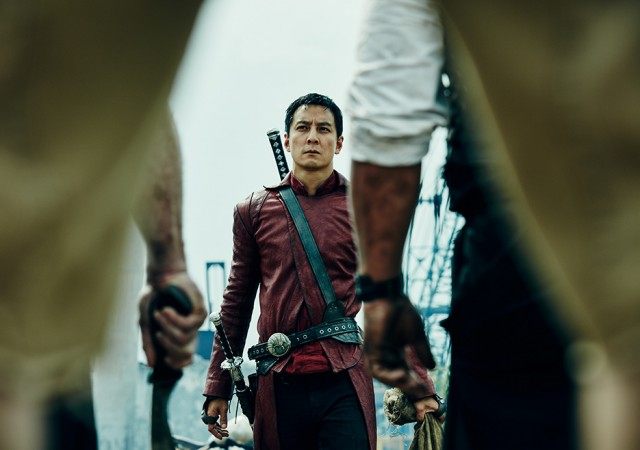 As we creep closer to the season finale of Into the Badlands, the plot continues to thicken. For the most part, this thickening is quite well-staged. With each passing week, the kung fu fight scenes get more and more potent, Sunny’s (Daniel Wu) personal life becomes more entangled, and M.K. (Aramis Knight) continues to prove his subtle wit, but also his innocence. As one of Quinn’s greenhorns, M.K. has been left to the wolves — to fight and fend for himself in dystopia — but with each conflict, each jagged metal butterfly tossed his way, he maneuvers his way out. (In no thanks to his hulk-like ability to snap necks.)

Basically, Into the Badlands is tossing a lot into the pot in its inaugural season — to lure fans to AMC and to draft some exposition for a Season 2. Where Episode 5, “Snake Creeps Down,” is effective, is in the choreography, the cinematography, the introduction of yet another exotic “badlander,” the preacher.

Showrunners Alfred Gough and Miles Millar continue to rely on their ravishing fight scenes, but they do so in appropriate doses. By Episode 5, fans have a firm understanding of each character’s arc. There is not much gray space; everything is black and white (though the fight scenes are far from it, with their rather sanguine texture). Gough and Millar have managed to find a palatable narrative, and they’ve shoehorned it into a vast, dystopian expanse. And, these variables mesh well together.

To pinpoint just a moment or two, “Snake Creeps Down” is most effective in its characterization of Ryder (Oliver Stark) and the blossoming relationship between M.K. and Tilda (Ally Ioannides). It was mentioned last week, how Tilda is M.K.’s saving grace when he takes on that fiery alter ego, and in the fifth episode, the writers sort of spell it out for viewers (which is a bit superfluous). Even still, the relationship between these two opposing clansmen provides an anchor for the show. Plus, Aramis Knight has come a long way since the pilot with regards to his acting chops. (Ioannides has shown no reason to question her yet.)

Where the show will need to tidy up a bit next week is with Jade’s (Sarah Bolger) arc, which is left open-ended in “Snake Creeps Down.” The showrunners should also hasten Sunny’s protracted escape from The Fort and/or Ryder’s eminent coup d’etat.

With mise en scene and audio, Into the Badlands is still performing at a proficient level; let’s say a “regent clipper” level! Some of the scenes are frame-worthy, thanks to Shane Hurlbut’s cinematography, and the music seems to couple the opening sequence cosily.

Click ahead for a plot synopsis of “Snake Creeps Down.” 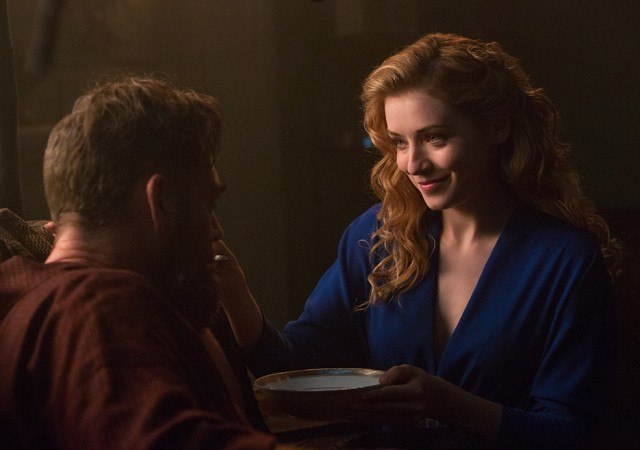 The episode begins as Sunny dreams about a fight he loses to the flared-up M.K. When he awakes, he is eventually told that he will have to help round up The Widow (who’s played by Emily Beecham). He elects to bring M.K. with him, along with another clipper/colt pair.

As for Ryder, he decides to visit Waldo (Stephen Lang), who apparently has a past with the young heir-apparent. Ryder asks the elder if he knows anything about the Azra pendant that M.K. once donned. Waldo asserts that Ryder would have to talk to his maternal grandfather to get the answers he needs. Viewers then learn that Ryder has no relationship with this kinsman, a preacher, and neither does his mother, Lydia (Orla Brady). Nonetheless, Ryder treks to a murky swamp where his grandfather appears to preach to his flock.

Back on Sunny’s hunt: The regent comes across a metal butterfly stuck in a tree. He scopes the place out and recognizes the trap. The Widow has laid vicious bear-traps down to catch the leg of an aimless clipper. Sunny manages to trigger these contraptions prematurely, before his men nearby are hurt. Unfortunately for Petri (the other clipper), one snags (and snaps!) his leg. The group is then sidelined and forced to camp out.

While Ryder discusses the pendant with his grandfather, the elder seemingly provides misinformation. He says that the item must be a replication of something from the old world forged by a Badlands smith. Ryder seems to walk on eggshells around his grandfather, but tells the old man that he asked about the Azra pendant because a boy in the fort had it. As Ryder saunters off atop his mount, decrying his grandfather’s push for salvation, the old man orders his men near, saying that “a dark one” is in The Fort, and must now be “cleansed.” 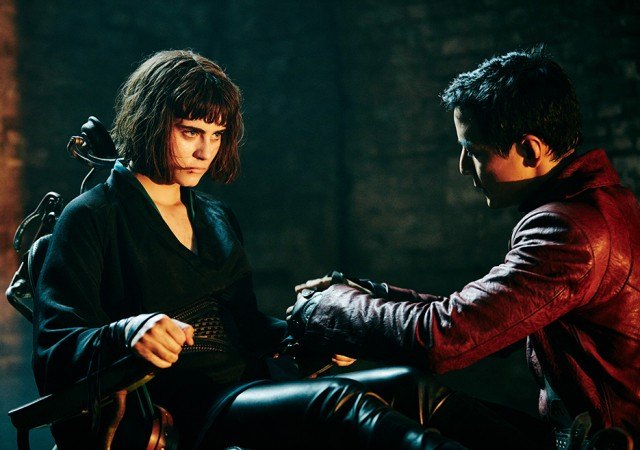 Back at The Fort, Lydia and Jade fight for the attention of a reeling Quinn (Marton Csokas). Jade is asked to lead in his stead, but Lydia is at Quinn’s side as he struggles with an insufferable headache. Eventually, it is incumbent on the women (Lydia and Jade included), and leftover men, to harvest the poppy plants before they go bad (for The Widow had stolen the cog workers who tended the fields). Jade leads this effort, but is eventually joined by Lydia. The two claim to befriend one another, and part ways civilly.

When Jade returns to Quinn’s side, with fresh, homemade soup, her and Quinn proceed to bond, but then his young bride-to-be is struck by a sudden illness. She faints to the floor and begins to foam from the mouth. (Could this have Lydia’s stamp on it?) Viewers do not get to witness Jade’s fate.

By the campsite, M.K. awakes to Tilda whispering to him in the night. He rushes to her side, and the two bond as Tilda learns that she’s become M.K.’s “pure” thought. They are discussing their plans to flee when Sunny crashes the party. He brings Tilda back to The Fort, and keeps Quinn privy to the butterfly’s captivity. The Baron orders the young teen tortured until she gives up the whereabouts of her mother, The Widow.

And as for the ailing Quinn: He’s being treated by Veil (Madeleine Mantock), and when she is not in the room, he warns Sunny to stop seeing her.

Separately, The Widow comes across the scene of Tilda’s kidnapping. She decides to call upon “a source” inside The Fort, to let her in, so she could claim her daughter.

Sunny is on the verge of torturing Tilda until she coughs up the appropriate information (because he’s also been threatened in a veiled sort of way by Quinn) when The Widow shows up to reclaim what’s hers. A loud and grisly fight breaks out; Sunny is on the cusp of killing The Widow when he looks over and sees a Colt (Bale) fighting Tilda in a locked cell. M.K. cannot get in to rescue her. So, his decision: time for some bloodletting. He enters “maximum M.K.” mode and immediately kills the culpable young fighter. Tilda glances at M.K., but escapes with her mother. Sunny gives chase to The Widow but is unable to corral her. Quinn is also an onlooker in the background.