‘Into the Badlands’ Finale Review: Will There Be a Season 2? 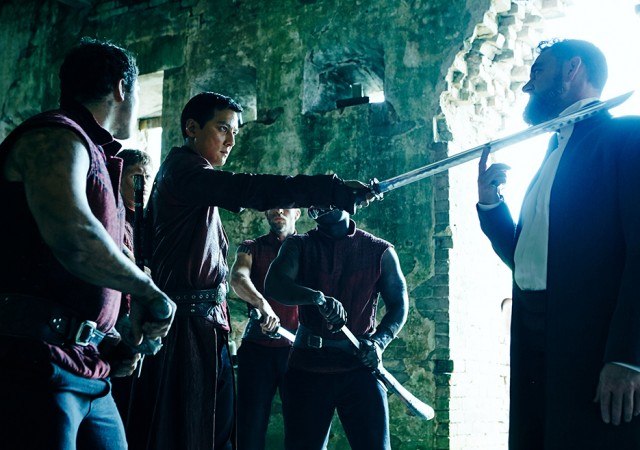 In a weekend overshadowed by Star Wars: The Force Awakens, it may be simple to forget there was an eventful season finale gracing the small screen on Sunday night. Episode 6 of Into the Badlands came in, and left, like a lion. Showrunners Alfred Gough and Miles Millar do not give their viewers the run-around, and their teleplays chomp right into the narrative only seconds into the show.

Although this seemingly truncated first season went by quickly, an entire world was still pleasantly evoked and built upon. Into the Badlands‘ Season One will perhaps be remembered most for: its affinity to violence; a thick, but palatable cast of characters; and fight scenes that dazzle/please even the harshest critic.

In the finale, “Hand of Five Poisons,” the whole rotation of characters is brandished onscreen yet again, but perhaps the largest, most emphatic journey is for Lydia (Orla Brady), who retreats back to her father’s religious compound after she is kicked out of The Fort. And, perhaps “Five Poisons” will spur conversation with regards to the mysterious group of ninja-like zealots who come to cleanse “the darkness.” And there is another game-changing event, well death, that occurs. (Read on to find out.)

Continuing the review, however, it should be noted that ItB resorts back to its now-familiar tradition of pleasing mise-en-scene and camerawork; it also features another sparkling fight scene at the badlands’ version of a brothel. Quite importantly, however, is the staging that the showrunners have done to set up a potential second season (which has been hinted at by Daniel Wu). While the thematic threads sometimes get lost in all of the colorful scenes, the story can still hold its own, and generally, has not wavered much since Episode 1.

A final closing remark: Let us say that ItB has the chance to remain an immutable cable presence if it continues the choreographed and colorful fight scenes, and if Gough and Millar prolong their “building period” with the already-formidable character of Sunny (Daniel Wu). While the story is shifting ever closer toward M.K. (Aramis Knight), the 16-year-old is just not as likable as his clipper mentor. Here’s also a couple of names whose characters translate nicely on the screen; these are folks we’ll be looking for in a potential season two: Lydia (Brady), Tilda (Ally Ioannides), Veil (Madeleine Mantock), The River King (Lance E. Nichols), and somewhat begrudgingly, Ryder (Oliver Stark).

Read on for a detailed plot synopsis of “Hand of Five Poisons.” 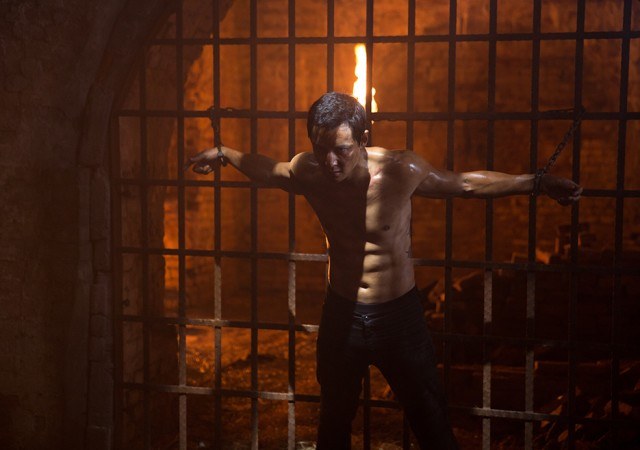 The episode begins as Sunny flees The Fort to check in with The River King (Nichols). He carries “baggage” with him, and hopes to get a ride for himself, and for Veil and M.K. However, he was asked to bring M.K.’s head as a form of payment, but instead brings the severed head of the colt killed by M.K. in Episode 5. While The River King does not let on to the deception, something tells viewers he knows full well what Sunny is doing.

Back at The Fort, Jade (Sarah Bolger) wakes up from her illness – she was poisoned by someone inside the walls of Quinn’s compound. The Baron enters her room as Lydia attempts to nurse her to health, and chastises his ex-wife (Lydia) for poisoning Jade; for he has found noxious plants stuffed inside Jade’s jewelry box. Quinn is sold on the fact that Lydia has poisoned his newer, younger wife. He orders her exiled. As his guards enter to remove her, Jade gives Lydia a sideways look. Perhaps her devious move has paid off.

Soon after, Ryder warns Quinn that Sunny is The Widow’s (Emily Beecham) source inside of The Fort. Ryder hints that the regent is the reason The Widow was able to enter the compound and sneak to the holding cells. Quinn quickly rounds up his men and surrounds/overtakes Sunny. The regent is forced to relinquish his prize possession, his sword. He is stripped of his rank and imprisoned by Quinn.

Quinn, promptly finding a replacement for his top clipper, puts his faith in M.K., who he knows has the wild, sanguine, Hulk-like side to him. He can become Quinn’s ultimate weapon. (It is the same thing that The Widow wanted to do to M.K., he just fell into…different hands.)

While bound and wounded, Sunny proclaims how he will kill Quinn as soon as he is free. Seeing the words as idle chatter, Quinn smirks and walks off. 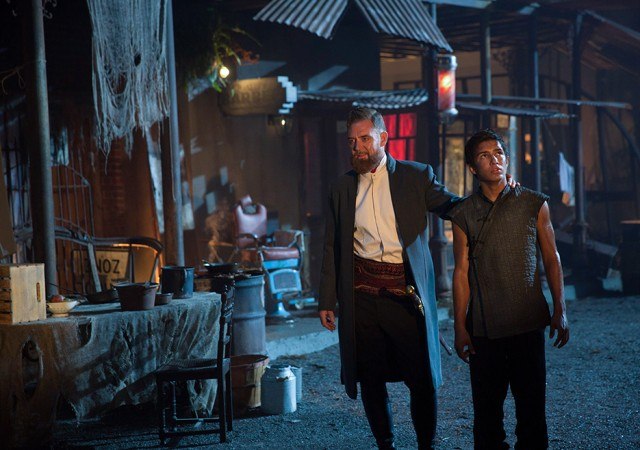 Back at The Widow’s hermitage, the leader is sickly and in need of assistance after her encounter with Sunny. She manages to corral Veil and bring her to this outpost before Quinn can get a hold of her. Her purpose here: to help revive the fearless Widow. The warrior has been left with blood poisoning – from a gaping wound on her stomach. An uneasy Veil sets aside her differences and helps nurse The Widow. She leaves three small vials of liquid with the wounded woman. She says only one of them is medication, the other two are poisons. She’ll disclose which one’s which once she is home safe. Tilda (Ioannides) takes Veil back to Quinn’s territory.

Once there, Veil warns her that she should not continue to blindly follow her mother, especially if all it amounts to is violence and death. She tells Tilda which vial is safe, but trusts her to make the right decision with her mother. Tilda returns, looks at the small tubes of liquid and deliberates over which to pump into her incalculable mother.

In The Fort, Quinn wants to help “initiate” M.K. as the next regent; he tells him to lose his virginity at a brothel so that he can practice for Tilda (when the butterfly comes to live within his walls). The two set out for this night on the town.

Meanwhile, Ryder meets up with Zypher (Ellen Hollman) to set in motion their plan to claim the positions of baron for their respective territories. They will overcome Quinn at the brothel site.

Sunny is let loose by Waldo (Stephen Lang), the true source on the inside for The Widow. Sunny is puzzled by the convolution, but nonetheless carries on. Waldo rolls his wheelchair off through the corridor to take his rightful place within this coup d’état.

In the last few scenes of the show, Lydia is born again – into her father’s religion, and Quinn and M.K. are pitted against Jacobee, Ryder, and Zypher near the brothel. Quinn wastes no time in slicing M.K.’s skin, to bring out the beast. Once he does, M.K. easily takes control of the fight. The others are left reeling.

As Quinn watches the mayhem, Sunny sneaks up behind him. Keeping his promise, he plunges his sword through Quinn’s stomach. The dying Quinn stumbles to the ground as blood flows from his mouth. (Viewers don’t see him as a…corpse, but the blood flow doesn’t bode too well for him.) 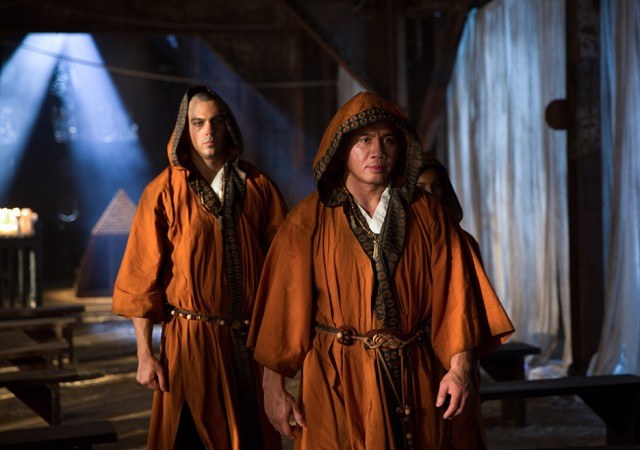 Sunny then takes part in the most thrilling fight scene of the season. The folks from the retreat on the mountain (fellow “dark ones”) finally arrive to claim M.K. In their monk-like robes, they storm the scene and use their divine power, and mastery of kung fu, to steal M.K. Quinn’s ex-regent puts up a nice fight, but he cannot stop the pure force of these three robed figures. They take M.K. and stuff him into a box as Sunny is left bruised and battered inside a building. A shadow then stands over him.

When last viewers see Sunny, he is in shackles in The River King’s ship, and is now trade bait, a commodity to sell, for the enigmatic leader at the wharf. Similarly, M.K. is bound and stuffed in a trunk by the mysterious robed people and driven across the desert (out of the badlands?).

Be sure to check The Cheat Sheet for updates should Into the Badlands get renewed for a second season!