‘Into the Badlands’: Inside Episode 2 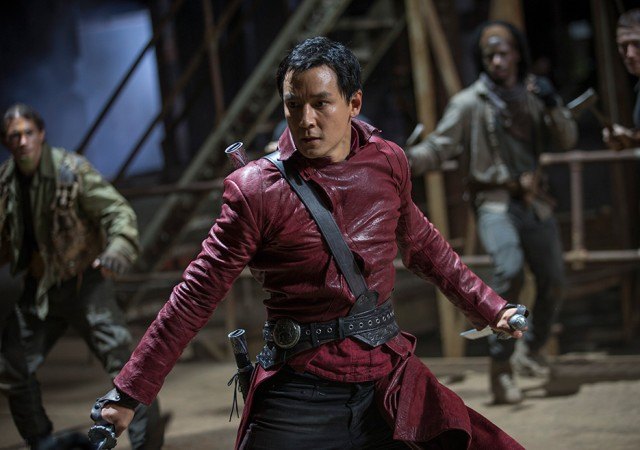 The second episode of AMC’s Into the Badlands, “Fist Like a Bullet,” is another impressive showing for creators Alfred Gough and Miles Millar. The plot assuredly thickens, and new characters are introduced. Furthermore, the characters viewers have already met are expounded on and chronicled in a way that meshes well with the small screen.

All in all, Into the Badlands is an aesthetic show that carries a slowly burgeoning narrative. Gough and Millar, who developed Smallville, will probably see a hit on their hands — and now they’ll have to deliver in the next four episodes.

First off, M.K. (Aramis Knight) is emerging as a forceful character, for the show will be leaning on him for much of its inspiration. While Knight’s acting is no tour de force, he shows that he has some chops, and will make a pleasant “Colt” for Sunny (Daniel Wu).

Wu, on the other hand, is emerging as a capable actor for this Sunny role. While most of the flare comes from the sword-slinging and the billowing crimson trench coat, there will be a time where Wu will have to deliver some poignant dialogue; and at this point, it is safe to say he is capable.

It is hard to watch this show and not recognize Marton Csokas’s presence — he plays the baron, Quinn, with gusto. Everything about this character is compelling, and a rather substantial spoiler is revealed about him in “Fist Like a Bullet.” Much of season one, it seems, will depend on Csokas’s ability to strike fear into his subjects at The Fort. So far so good!

On production values, Into the Badlands is a pretty dazzling — the color contrasts, attention to detail, satisfying editing, and juxtapositions of landscapes are a ton of fun to witness. As mentioned in the review of the pilot, Into the Badlands is supposedly set hundreds of years in the future, but its scenes look like something out of an Antebellum drama. But then, Quinn goes bonkers with Sunny’s sword, and you can tell why this is a martial arts show. Nonetheless, Into the Badlands is emerging as an optimal choice to make on a Sunday evening. 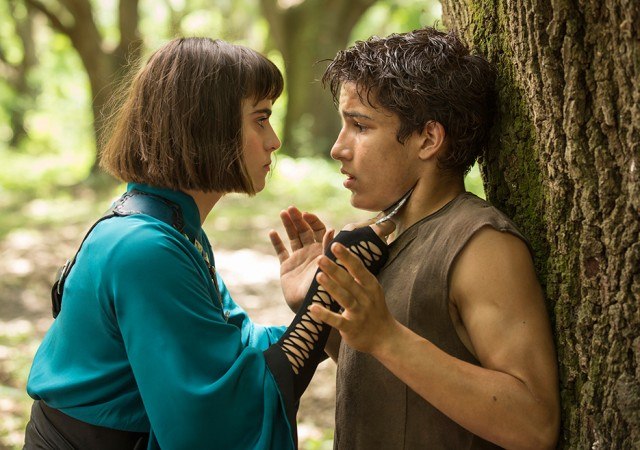 “Fist Like a Bullet” begins as M.K. runs through the forest after escaping from Quinn’s fort. Reaching the border of the baron’s territory (marked with an armadillo emblem), M.K. hesitates before pressing on past a rock fence. Before he does so, he witnesses a young girl out hunting for squirrels. This girl, who quickly surprises and overtakes M.K., reveals herself to be Matilda (Ally Ioannides). She takes M.K. back to her home, which turns about to be The Widow’s (Emily Beecham’s) mansion, for “Tilda” is Minerva aka The Widow’s daughter.

M.K. quickly has to pretend that he is an innocent bystander, the son of a free farmer. Pressing him, The Widow uses impressive antics to make the teen a bit nervous. She needs Tilda to draw blood from M.K., to see if he’s the one she’s been after. She wants to use the boy with the dark powers to help her take over Quinn’s fort, and thus usurp him. Tilda, however, grows fond of M.K., and smears her own blood on his face and tells him to cry out — for the lack of an otherworldly reaction bodes well for M.K.

A group of nomads arrives at The Widow’s mansion to discuss business, but The Widow wants to use them strategically, to get at Quinn and what his power affords. Though the men do not wish to help her initially, they are…persuaded. They also agree to take control of M.K., who is a fugitive with a bounty on his head. The nomads knock him out and put him into the back of a refurbished vehicle that seems to be circa 1940.

Back at Quinn’s, Sunny is left to question whether he can have a baby with Veil (Madeleine Mantock). First, though, he is left to try and dispel the urge to flee to the free city of Azra. He speaks with an older Clipper, Waldo (Stephen Lang), about the matter, but the elder tells Sunny that his past will always find him.

Quinn demands that Sunny accompany him on a ride beyond the wall. On horseback, they arrive at a modest homestead (that looks like something out of the deep Appalachians in around 1860) to visit a doctor. Inside, Quinn is told that he has a terminal brain tumor. In the other room, Veil’s adoptive mother tells Sunny that all her daughter wants is for Sunny to be there for her. When Quinn reemerges, he forces Sunny to clip (kill) the doctor and his wife, as they have his medical information and hence a tool to strike at him. Sunny refuses to kill them, so Quinn grabs the Clipper’s sword and takes care of business himself. As he steps back down the doctor’s stairs, blood is speckled across his face (a catchy frame here!) and he nonchalantly rides back home.

Back in the fort, Ryder (Oliver Stark), Quinn’s heir-apparent, questions his father’s antics and wants to aggressively pursue The Widow. Ryder was baited into believing that nomads are selling opium from an abandoned factory, and so Quinn orders Sunny and his son to investigate. Here, a kung fu battle of epic proportions ensues: Sunny must eradicate all of The Widow’s crushers sent to kill Quinn’s two most important men. (Along the way, Ryder gets tangled in chains and suspended in midair–by the throat.) Needless to say, Sunny fends them off, and M.K. shows up here, too, for he hitched a ride, bound, with the nomads.

The coming episodes appear to delve into this power struggle at The Fort, and The Widow’s attempt to breach the wall. It’s also obvious that Tilda and M.K. will become “a thing.”

Be sure to catch the next Into the Badlands episode next Sunday at 10 p.m. on AMC.