‘Into the Badlands’: Inside the Pilot of AMC’s New Series

On November 15, AMC rolled out its latest program, the anticipated and marketed Into the Badlands. It is a healthy mix of Mad Max and Kill Bill, as the promo asserts, although you can even take it a step further. It also retains a bit of flavor from something like Django Unchained. What is meant by that is how Into the Badlands‘ distinct costumes and scenery rivals that of a southern plantation (thematically, the slavery notion is played up on as well).

Into the Badlands, though set hundreds of years in the future in a post-apocalyptic world where guns have been outlawed, seems to resemble a more authoritative version of the Antebellum South. The baron, Quinn (played by Marton Csokas, The Equalizer) is strikingly similar to Calvin J. Candie (Leonardo DiCaprio), though the world he functions in, meddles in, is a bit more fantastical than Candie’s world. Nevertheless, it is neat to see how a futuristic, raw, kung fu show can draw upon various cultural influences.

The pilot, entitled “The Fort,” is a striking 55 minutes of television, if only for the beguiling mise en scene. It dons rich frames which practically spew blood, and even captures the bounce back of realistic raindrops. All that is to say that Alfred Gough and Miles Millar, the showrunners, have an interesting, conceptual show on their hands. While they go to great lengths to capture the fight scenes and the depth of Quinn’s fort, they also feature sub-par acting from teen Aramis Knight (who plays M.K.), who is poised to be a main character.

The performance from Csokas is going to be fun to watch, for he commands the screen when he is featured. The shots of him holding a long, modified pipe, or of him pacing around the veranda of his home also seem to bolster this character. Other assets that are emerging are: Daniel Wu’s dominance in hand-to-hand combat (his acting is competent, too), the Quinn’s family dynamic — with his (first) wife Lydia (Orla Brady) and his son and heir, Ryder (Oliver Stark). The odd spell that seems to overtake M.K. when he sees blood has potential, though the showrunners will need to explore this a bit more, to make it more dimensional.

Altogether, “The Fort” is an entertaining pilot. It blends genres seamlessly, and has no real harness pulling it in — that is, to adhere to a strict set of facts. Because of the fantastical, martial arts nature of the show, there are various routes for its characters to take. Whether it develops into a futuristic drama, or case study in kung fu, one fact remains: The show is poised for a solid first season. (Granted, improvements can be made on the acting front and the way it could stray toward “formulaic,” generic even.) 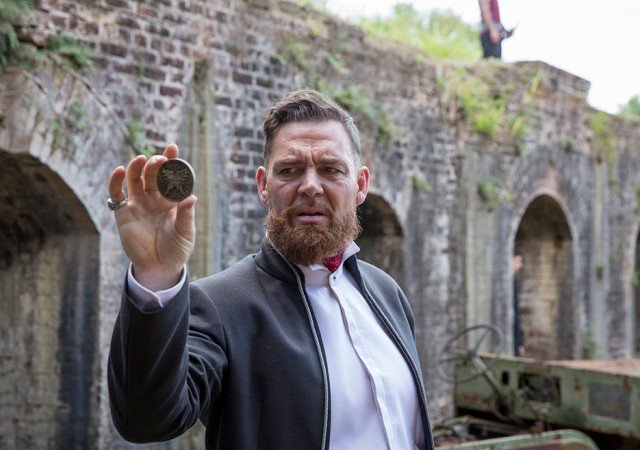 In “The Fort,” the show opens as Sunny (Daniel Wu) rides through a wide expanse — filled with poppies — and discovers a murder site. Innocent people, which he calls “cargo,” have been murdered, seemingly by nomads. Sunny tracks these nomads down via a plume of smoke, and singlehandedly kills each one. It seems that they were sitting on a prized possession: M.K., who was locked in a trunk. The teen tells Sunny that someone named The Widow paid the nomads to track him down.

Sunny and M.K. ride back to The Fort, a walled stronghold controlled by Quinn, one of the “barons” who control all of humanity (or what is left of it). Passing through the walls, Sunny shows M.K. the levels of society: slaves, colts, clippers, and barons. The colts, who are teens training to be clipper assassins, must fight each other and demonstrate their skills in front of the other clippers.

Sunny, Ryder, and Quinn relegate M.K. into the ranks of young boys to fight for the place. Ryder, who is Quinn’s ill-equipped, temper-plagued son, wants to strike against the barons who have acted against Quinn. The baron, however, sides with Sunny in not mounting an offensive. (Ryder is obviously jealous of Sunny’s sway over Quinn.)

M.K. has his pendant stolen while he fights, and Ryder takes control of it. This, too, angers M.K., who goes into Quinn’s home to steal it back. It turns out that the pendant advertises the symbol of Azra, a distant city of M.K.’s youth which is beyond the badlands, and not dominated by barons. Sunny also has a peculiar connection to Azra from his past, for he carries a compass marked with the same Azra stamp. Naturally, this forges a distinct bond between clipper and protege. Sunny, who is illiterate and is being coached to read by his girlfriend, Veil (played by Madeleine Mantock), who he has also impregnated, decides to help M.K. escape the clutches of Quinn’s fort.

As a matter of fact, he sees M.K. off via the underground tunnels in the middle of the night. Unsurprisingly, however, Lydia spots him aiding the child (who was set to be executed for stealing). Sunny is then called in to see Quinn, who has determined Sunny is getting a bit too big for his britches. He demands that Sunny live closer to Quinn’s central mansion. 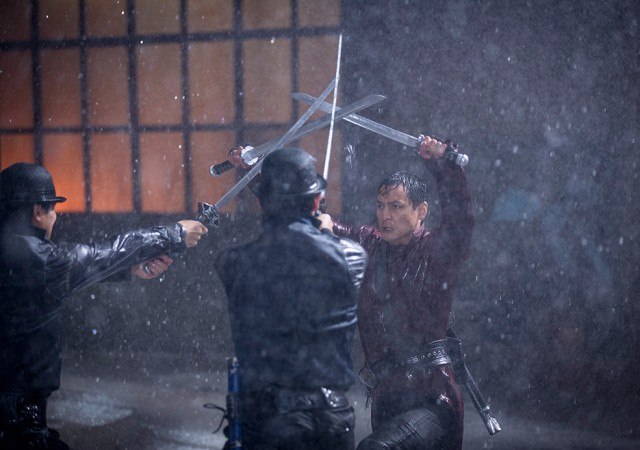 By the time the show ends, here are a few details we’ve learned about the three main characters:

Be sure to catch Into the Badlands on Sunday nights at 10 p.m. on AMC.