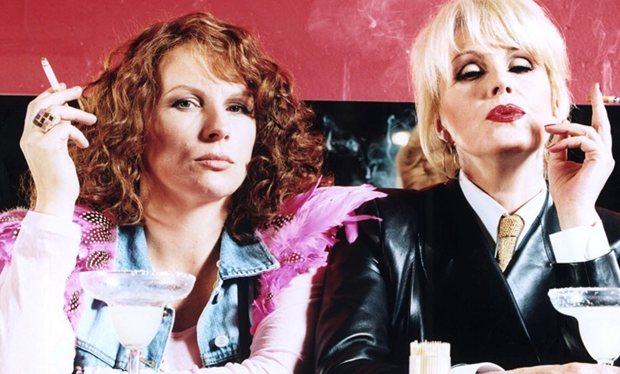 The British television series Absolutely Fabulous may be headed to the big screen at last. Over 20 years after the BBC sitcom first aired, creator and co-star Jennifer Saunders has confirmed she recently completed a script for a film adaptation, to be titled Edina and Patsy.

Absolutely Fabulous, otherwise known as AbFab, followed an aging, social climbing publicist named Edina Monsoon (played by Saunders) and her best friend Patsy Stone (Joanna Lumley). Despite that both of the characters were well into their forties, the pair gleefully continued to imbibe in drugs and alcohol and chase trends and younger men. The show’s main cast also featured Julia Sawalha as Edina’s disappointingly conservative daughter Saffy and June Whitfield as Edina’s perpetually clueless mom, both of whom have reportedly been written into the film.

The series originally aired for three seasons on BBC from 1992 to 1995. It was then brought back for a fourth season in 2001 and revived for a fifth in 2004. The last time new installments of the series aired was in 2012, when Saunders and Lumley both returned for a brief three-episode run in honor of the show’s 20th anniversary.

A movie version of the story has long since been rumored, with Saunders reportedly starting the script over two decades ago. Now, with a draft completed, the actress says she hopes to begin shooting the movie over the course of the next year. “I’ve finished the first draft,” Saunders said, per Britain’s Mirror. “I’m feeling euphoric. My proper New Year’s resolution is to do the film, otherwise it’ll be a pointless year of procrastination.”

Saunders has been commenting on the possibility of a potential movie for several years now. “I’m definitely going to do it,” she told New York Magazine back in 2011. “I’m aiming to shoot this in a beautiful part of the Riviera. I fancy the south of France in the spring.”

The actress discussed it again last January, expressing apprehension over how the movie might be received, given how long it’s been since the show first aired. “It’s like the second album syndrome,” Saunders said on The Jonathan Ross Show. “Once you’ve had a bit of success, the last thing you want to do is go and make a flop. So the biggest fear in me is that it won’t be good enough. I’m really nervous about it.”

With the now-completed script for the film adaptation on the table, it’s clear that Saunders is eager to kick the project into high gear and start filming as soon as possible – something that is sure to come as a thrill for fans who have long since been eagerly awaiting the movie. While the actress stopped short of revealing any specific details about her big screen take on the story, it’s evident that fans can expect plenty more of the same humor that made AbFab such a hit. Joking about who she would like to see replace her and Joanna Lumley as Patsy and Edina respectively, she told the Mirror, “Angelina Jolie and an orangutan.”