Is ‘Chappie’ a Bad Sign for Blomkamp’s ‘Alien’ Reinvention? 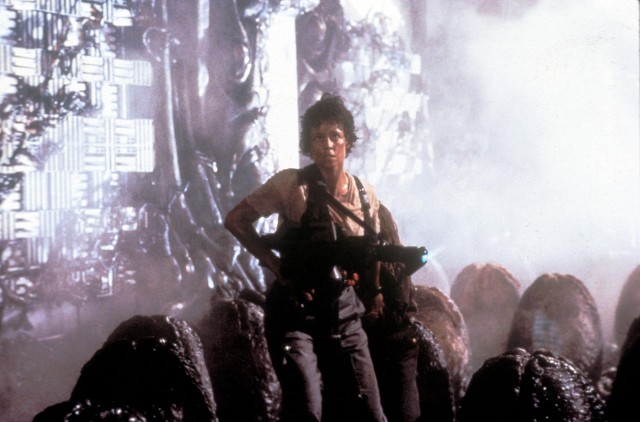 Director Neill Blomkamp announced last month that he will be responsible for reinventing the beloved Alien franchise, but is he up to the job of instilling fresh blood in the beleaguered animal suffering from years of lackluster reboots and sequels? Star Sigourney Weaver thinks so, though the reviews for his new science fiction movie Chappie are calling the idea into question.

“I can’t think of a better director,” Weaver told Variety at the premiere of Chappie. “He’s a real fan. I think he’ll be true to the world and take it in unexpected directions. It’s got a lot of sinew in it. It will certainly stand up to the others and probably break a lot of new ground as well.” Weaver will reprise her role as Ellen Ripley, a character recognized as one of the most hardcore female heroines in cinema, particularly in the male-dominated science fiction and action genres.

Blomkamp is known for his science fiction films, including District 9 and Elysium. Last year he posted some Alien-inspired artwork online and got fans excited for a potential reboot with him at the helm. It seems the right people were impressed with his art, as he ended up being chosen to direct the fifth Aliens film, and Weaver liked his story enough to agree to return to the franchise after dismissing previous ideas.

The first two Alien films are considered to be among the greatest science fiction movies ever made, but Alien 3 and Alien: Resurrection weren’t so well received. The two Alien vs. Predator films that were also made suffered from similarly poor quality. Science fiction filmmaking legend Ridley Scott returned to the Alien franchise with the prequel Prometheus in 2012, which showed some promise for the future of Alien. Blomkamp’s fifth Alien movie will stand outside the Prometheus storyline (Scott is planning a second Prometheus film).

But is the visionary young director really the right man for the job? District 9 and Elysium were praised for their unique visions of the future, and District 9, about a group of alien refugees being held hostage in South Africa, is considered a modern sci-fi classic with a 90% from critics on Rotten Tomatoes.

Blomkamp’s next film, Elysium, wasn’t quite as well received, with a 68% on Rotten Tomatoes, but it was praised for presenting an interesting dystopic future in which class distinctions leave the poor majority living on a ruined Earth and the wealthy taking all medical care with them to an upscale space station called Elysium.

Blomkamp’s latest film, Chappie, isn’t getting such praise. The movie is about a time in the near future when the police force consists of robotic androids used to keep everyone in line. When one of those robots, named Chappie, ends up being given artificial intelligence that allows him to think for himself, he becomes a threat to the very police program and mechanism for keeping society in order. Weaver and Hugh Jackman star in the movie, which is receiving some lackluster reviews thus far.

The Wrap said, “special effects can’t make up for the lack of story and auto-recycling. … It’s also easy to recognize that Blomkamp’s films, each set in near-future riffs on our own society, now represent a groove that is stuck in a rut.” Time Out said that “the plot is threadbare” but also called the movie a “hugely entertaining oddity.” It debuts in theaters this weekend.

Blomkamp accomplished the important task of getting Weaver’s faith in the fifth Alien. Now it remains to be seen if the director can adequately reinvent the franchise so that fans can forget the litany of terrible sequels and so that it can return to its former glory. If he can channel more District 9 and less Chappie, then Blomkamp will be the man for the job.