Is ‘Christopher Robin’ Aimed at Kids, Adults, or Both? 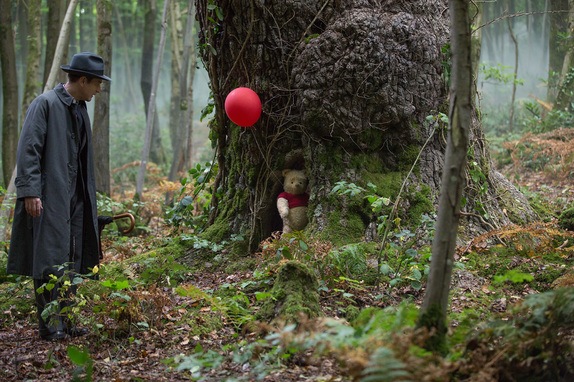 Disney’s latest movie, Christopher Robin, is about a middle-aged man who works as an efficiency manager at a luggage company and whose marriage is falling apart. It also features Winnie-the-Pooh. So wait, is this movie actually for kids at all? Is it more geared towards adults like Goodbye Christopher Robin or Where the Wild Things Are? Or can both kids and adults enjoy it equally?

The answer, technically, is that the movie is for both groups, and you shouldn’t necessarily feel bad about taking a child to see it this weekend. But the adults in the audience will definitely get a lot more out of the experience than the kids will, and younger views will have to stick with a fairly dreary first half to get to the parts of the film that will really appeal to them.

Christopher Robin is a strange beast, one that is at once tremendously melancholy and also earnestly silly, quickly changing gears from a serious scene straight out of a stuffy British drama to a scene built heavily around physical comedy, yet it never quite sheds its sorrowful tone or lifts off into something fully joyful. This creates for some odd tonal shifts in a movie that is a bit of a mixed bag and doesn’t earn all of its emotional moments but is still certainly worth seeing for any Winnie-the-Pooh fan.

After giving us a taste of the gang in the Hundred Acre Wood right away in the opening minutes, Christopher Robin speeds through the next several decades of the titular character’s incredibly depressing existence, even showing us an actual war scene at one point. We soon learn that Christopher, the boy who once escaped into the woods to play with his animal friends, is now working a comically boring job, neglecting his family, and, according to his wife, has not smiled in years.

During this stretch of the film, adults in the audience may begin to doubt their decision to bring a child to this film, and they may even doubt the decision to come themselves. The degree to which Christopher is out of touch is so over-the-top that we don’t really relate to him much. Theoretically, adult viewers, too, should question whether they’ve lost the magic in their own lives so that this movie can go on to remind them about the joys of Pooh’s childlike wonder. But Christopher comes across less like a man who, through the normal process of growing up, has abandoned the magic of childhood, and more like a cartoonishly bad father and husband who somehow doesn’t realize that when his daughter wants him to read her a bedtime story, a history book isn’t what she had in mind.

The film springs to life as soon as Pooh returns to the picture, though. Christopher must stay home to work as his family goes away for the weekend on a trip that he was meant to accompany them on, but he soon runs into Pooh, who has stumbled into London while looking for his friends. It may take you some time to get used to Pooh’s new look, but in terms of his personality and dialogue, there’s no question that this is the same character we grew up loving, and nearly every line of his earns a laugh or an “aww” from the audience.

It’s at this point that the film begins to utilize a lot more physical comedy that will appeal to the kids in the audience, assuming the series of scenes about Christopher’s work and family life haven’t yet put them to sleep and the scenes where Christopher repeatedly yells at Pooh haven’t sent them running out of the theater in tears.

Eventually, Pooh and Christopher must go on a journey together, during which Pooh is delighted by the simplest things like a red balloon and Christopher plays the straight man who, despite having the appearance of being Very Serious and All Business, is now seen walking around the city talking to his stuffed bear. None of the comedy is particularly revelatory, but it works, and Ewan McGregor fully commits. 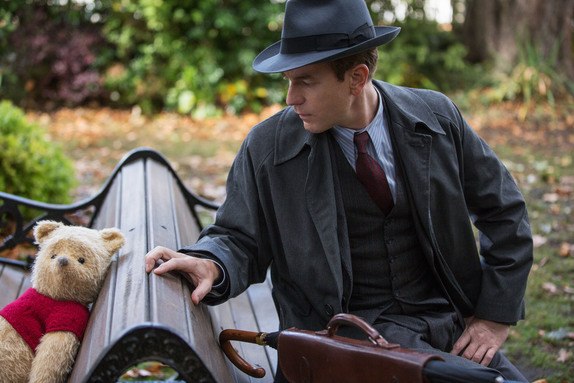 The movie does, however, rely a fair amount on audience members already having a preexisting relationship with Pooh to the point that just hearing a piano rendition of the classic theme will generate nostalgia-fueled tears. Much of the film’s appeal comes from this sense that we’re returning to something that used to be so beloved to us. If this was a child’s very first exposure to Winnie-the-Pooh, would they fall in love with him like we did as kids? It’s possible, but maybe not in the same way, and certainly the film doesn’t work very hard to convince them of the greatness of Pooh’s friends, several of whom have very little screen time.

Ultimately, Christopher Robin falls a bit short of its potential for two main reasons. One, aside from the titular character being unrelatable, his journey is too simplistic and thinly sketched out. Had Christopher’s story felt more like a natural and gradual evolution, there would have been an opportunity for this film to leave adults a sobbing mess by the end in the same way that Toy Story 3 did, teaching us some lessons about growing up that were not patently obvious from act one. Instead, the ending is the very definition of one that wraps things up in too neat a package for a story that seemed to be interested in emotional nuance at the outset.

Two, the mix of heartache and slapstick doesn’t always blend well together. The worst example of this comes early on; in an otherwise serious scene about potential layoffs at work, Christopher’s boss knocks over a stack of suitcases for no real reason. The film has five credited screenwriters, and it appears that each of them had their own approach to blending the adult and children’s fare together.

Still, what does really work about Christopher Robin is the thing that was most important for it to get right: Winnie-the-Pooh himself. There are no real complaints to be had on this front; Pooh is absolutely perfect, which makes the film easy to recommend despite all of these issues. At the end of the day, adults who want to spend 100 minutes revisiting an old friend will be pleased with Christopher Robin, even if the movie itself is flawed and even if the kids in the theater leave feeling less enraptured by this tale of recapturing youth than their parents.