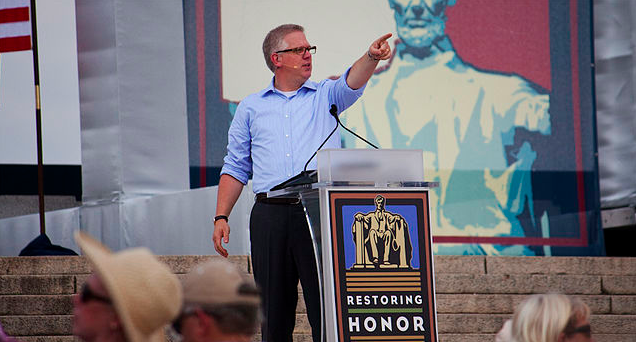 Controversial conservative TV and radio host Glenn Beck is in the process of getting his recently purchased film studio up and running, and he already has three original ideas in development to be made into motion pictures. According to a report from The Hollywood Reporter, Beck is adding a film branch to Mercury Radio Arts, the parent company behind his radio show and his digital media effort TheBlaze. Beck told the publication that his company has purchased The Studios at Las Colinas, a film studio in Irving, Texas, and is currently readying the space to begin work on his film projects.

“We’re getting it ready for some big plans,” Beck said to The Hollywood Reporter. He proceeded to tell the publication that he has ideas for three different movies in development. One will be set in ancient times, one will be a more modern story, and the third he referred to as “faith-based.” Beck has also purchased the film rights for his best-selling memoir The Christmas Sweater back from Sony and is looking to develop that story into a movie either for television or the big screen.

Faith-based movies may be a smart way to go. Recent films based on Christian themes — including Noah, Son of God, and God’s Not Dead – have performed well at the box office. Son of God made $25.6 million in its opening weekend in February; God’s Not Dead surprised in March, when it took in $9.2 million at the small number of theaters in which it opened; and the big-budget flood story retelling Noah grossed $43.7 million in its opening weekend. With the Beck’s current following, he could easily and profitably tap into the demographic that would be interested in seeing faith-based movies.

“Hollywood is missing this moment to reconnect with the American people because they don’t speak the language,” Beck said. “Some of it is out of spite — they might not like people of faith.”

“I bought a movie studio for a reason,” Beck told The Hollywood Reporter, hinting that a life outside political commentary may be for him. “I have every intent of finding great artists who will tell great stories that aren’t typical. Everybody thinks they know who I am because of my stint on Fox — that was two years of my life. I’m much more into culture than I am into politics, and that’s where I intend on making my stand.” Beck left his popular show on Fox News three years ago.

Beck ended the interview with a bizarre rant about how he’s tired of politics and believes movie-making is a more worthwhile pursuit. “We’re beginning to agree that Republicans and Democrats suck — they’ve built this machine to grind people into the ground. I hate this stuff. I hate politics. I hate politicians and I feel like I’m wasting my life. Don’t we all know what’s happening? George W. Bush was taking us down a road, and Barack Obama is taking us down that same road. What difference does it make? I don’t want to waste my life anymore,” Beck said to the publication.

Whether or not you agree with Beck’s views, his political opinion shows are arguably not a “waste,” since TheBlaze pulls in an estimated $40 million in revenue per year, and Beck makes around $20 million a year from his radio show alone, according to estimates by The Hollywood Reporter. Beck’s large base of devoted followers and the amount of money he has at his disposal make success likely for his venture into faith-based films, so focusing on movies rather than politics could end up being a good move for the radio personality.