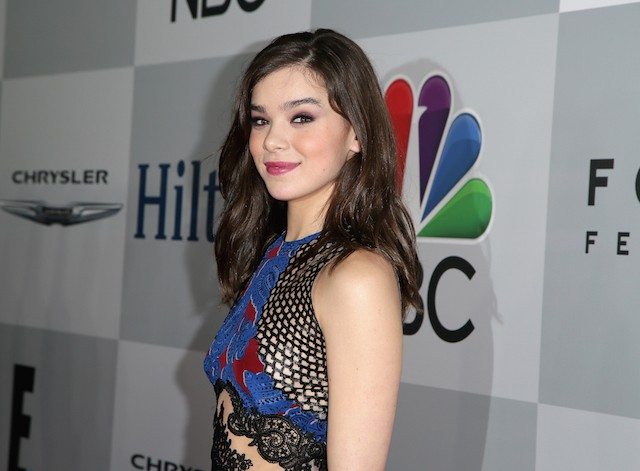 Hailee Steinfeld will soon lead her own YA film franchise. The young actress has signed on to star in the upcoming supernatural romantic thriller Break My Heart 1,000 Times, based on the 2013 novel of the same name by Daniel Waters.

Described as a cross between The Sixth Sense and another favorite YA novel The Fault in Our Stars, Break My Heart takes place after a cataclysmic event that has torn the barrier between our world and the next. In the aftermath of the event, Remnants, ghost-like essences of the deceased, have become a part of everyday life. After years of peaceful coexistence with the living, a Remnant sends a threatening message to a young girl. The message ends up propelling her on a mission with consequences that will forever change the course of her life.

According to Deadline, the film is considered a potential launching pad for a future franchise. Jason Fuchs, who penned the script for Pan and is also set to write the upcoming Wonder Woman film, has signed on to adapt the screenplay. He will also executive produce the project along with Pitch Perfect producers Paul Brooks and Scott Niemeyer, and Life As We Know It’s Brad Kessel.

Meanwhile, Scott Speer is on board to direct. Speer made his directorial film debut in 2012 with the dance film Step Up Revolution and has helmed episodes of MTV’s Finding Carter. He also has previous experience in the young adult genre as an author. He’s the writer of the Immortal City trilogy, which takes place a world where celebrity culture revolves around supernatural beings. The source novel was released in 2012, with the sequel, Natural Born Angel, following in 2013. Speer is reportedly currently writing the final book in the series.

For Steinfeld, the role comes just as the star continues her rise in the Hollywood ranks. The actress, who first broke out with her Oscar-nominated turn in 2010’s True Grit, has taken on a slew of high-profile roles over the last couple of years. She appeared in 2013’s Romeo & Juliet and Ender’s Game. Last year, she co-starred alongside Keira Knightley and Mark Ruffalo in the musical drama Begin Again, with Kevin Costner in the thriller 3 Days to Kill, and with Hilary Swank in the Western indie drama The Homesman.

Break My Heart could prove to be another significant role in Steinfeld’s career, should the project prove to be as successful as other recent YA book-to-film adaptations. The genre has proven to be hugely popular in theaters in recent years, bringing in big bucks at the box office and helping catapult its young stars to new levels in their careers. Actors like Jennifer Lawrence, Shailene Woodley, Ansel Elgort, and Dylan O’Brien all saw a rapid increase in star power following starring turns in the YA films The Hunger Games, The Fault in Our Stars, Divergent, and The Maze Runner, respectively.

Whether Break My Heart could prove to be a similarly big career moment for Steinfeld remains to be seen, but the actress has plenty of other notable projects to keep her busy in the meantime. She is set to appear in a wide range of blockbusters and indies over the next year, starting with next month’s Pitch Perfect 2. She’ll follow that up with the indie action adventure comedy Barely Lethal, the Sundance drama Ten Thousand Saints, and the action thriller Toronto Film Festival pick The Keeping Room. The actress will also star in the crime drama Term Life later this year, as well as the comedy Carrie Pilby, due in 2016.