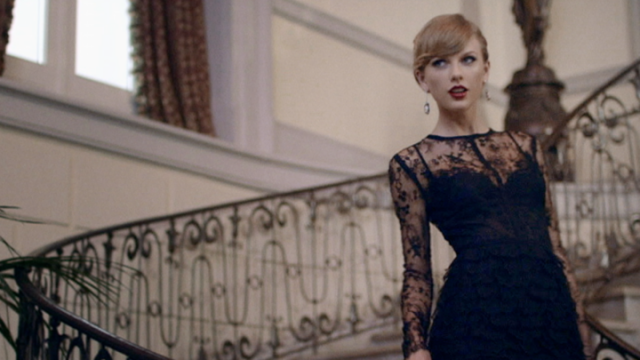 Taylor Swift is having a big month after the record-setting sales of her latest album 1989, and a public and much-discussed breakup with Spotify. Now, the singer is once again breaking new ground, this time via her just-released music video “Blank Space.”

After releasing the clip online yesterday, Swift announced today that there’s also a free app that allows users to explore and interact with the luxurious world depicted in the video. As fans already know, the “Blank Space” video is shot in the style of a short film, featuring a ballgown-wearing Swift on a beautiful, immaculately kept estate that serves as the backdrop for the blossoming relationships between her and her current lover (all of which quickly turn ugly). Though the video features plenty of sweeping shots at the sleek, movie-like setting, fans can now get an even closer look at the grounds via the coinciding app.

So how exactly does it work? The app, created with American Express and available for both iOS and Android, essentially turns the video’s mansion into a videogame-like interactive experience that players can enter and explore. Once opened, the app transports users into the featured house, where they can either follow an animated Swift and her boyfriend as they enter and exit the mansion’s six different rooms or look around on their own. Like the video, the app produces a 360-degree viewing of the action between the couple, allowing users to see the house from various angles. (like from side-to-side or upward). The experience only lasts as long as the song (around 5 minutes), but users can just hit replay if they want to continue exploring.

Other side characters, like a butler or a portrait painter, also pop up in the app, adding extra layers to the story. Players have the option of following these additional characters around as well, as they explore and search for the 40 collectible Easter eggs placed around the virtual mansion — including a picture of Swift’s grandmother, a coffee table book featuring pictures of the singer’s childhood and a journal entitled “My True Loves” that holds handwritten lyrics and Polaroids of Swift’s cats.

“This video experience is really fun because we have hidden items in the rooms for fans to find, look at and test their ability to find other items,” Swift said in a press statement. “Joining up with American Express to bring this experience as a gift to the fans has been so amazing. This is all for them, and I hope that they will have a lot of fun with it.”

The app isn’t meant to be extensive or particularly complex (it doesn’t capture a realistic sense of motion, fixing players at a certain spot in each room instead of having them walk through step-by-step), but it does provide a fun way to further engage with fans—something Swift has always made a point of doing with each album. It’s also another way for the singer to promote her music on her own terms, another priority that Swift made clear during the recent Spotify controversy. Instead of being part of the music streaming “experiment,” as she described it, she gets to control her own. While she’s not the first artist to try immersive clips, the response she gets with the app could be indicative of what we can expect from music videos in the coming years.