Is This Meghan Markle’s Worst Fashion Moment of All Time?

Duchess Meghan Markle is more than just a new lively addition to the British Royal Family. The former actress is also an avid philanthropist, women’s rights activist, and fashionista. From her stunning royal engagement looks to her more laid-back attire, Markle has been a marvel when it comes to creating the perfect looks as a newly minted royal. Though the mother-to-be’s baby bump is slowly popping out, she’s not letting that deter her iconic sense of style.

Though she’s had way more hits than misses when it comes to her style, Markle has also had to adhere to specific royal rules when it comes to her wardrobe. While some of those are hidden like bobby pins for her hair or weighing down her skirts and dresses, another dreaded rule enforced only upon royal women contributed to the Suits alum’s worst fashion moment of all time.

If you know anything about royal wardrobe rules, then you know that Queen Elizabeth II has a strict pantyhose policy for the women of the royal family. The queen has been wearing pantyhose her entire life, and Duchess Kate Middleton and Duchess Camilla Parker Bowles all wear the flesh-toned hosiery year-round. However, when she first got engaged to Prince Harry back in Nov. 2017, Duchess Meghan Markle seemed to shun tradition and go-bare legged for her official engagement announcement.

However, when she officially wed Prince Harry in May 2018, Markle had to reign in some of her carefree ways concerning her wardrobe and adhere to some of the queen’s standards.

Meghan rewearing her fab Stella McCartney coat from Cardiff visit, but I cannot get over the glare of these tights pic.twitter.com/quRNchux1v

Thus far, Markle seems to be getting along fine with her new pantyhose requirement. However, she slipped up in a significant way during Remembrance Day 2018. The pregnant duchess stepped out alongside husband and the rest of the royals family to mark the 100th year of Remembrance Day. While Markle looked sleek and slick in her black Stella McCartney coat, her hosiery was cringe-worthy.

Instead of a natural sheer look, her pantyhose had a garish shiny look to them which distracted everyone from her outfit overall. Though we’re sure Markle chooses her own clothes, we assume that someone on the Duchess of Sussex’s staff runs her errands for her. This shiny stocking snafu is a lesson that “nude” is not a neutral color. Markle is mix-raced which means she has a more olive/golden skin tone. Apparently, whoever purchased her pantyhose forgot to choose the duchess’ correct skin tone. 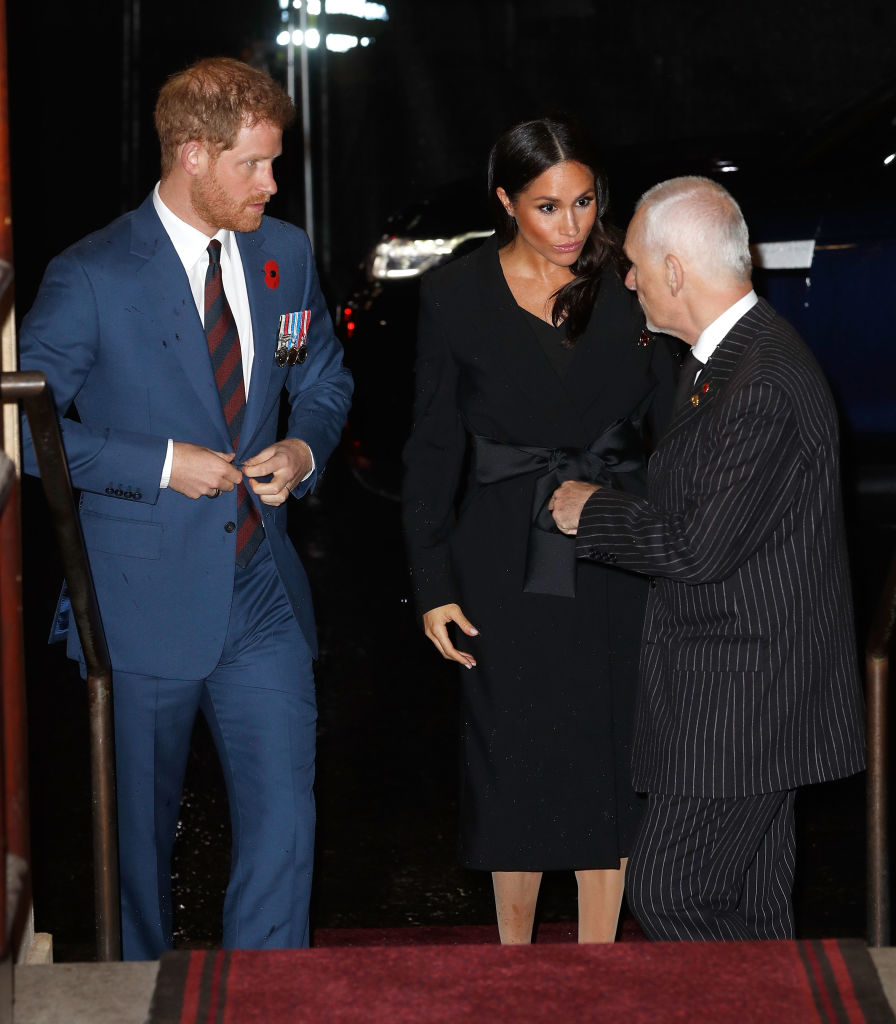 The internet is still baffled by the tight situation, but there also might be a more realistic explanation. Since Markle has been wearing the correct color tights for months, it seems completely plausible that she spilled something on her legs, or step in a rain puddle — splashing water on to her legs which gave her tights that dreadful glare.

Either way, we hope that Markle uses this as a sign to give up on pantyhose unless they are completely necessary.

Read more: Does Meghan Markle Receive a Salary as a Working Royal?