Is Warner Bros. Finally Bringing Back Its Looniest Franchise? 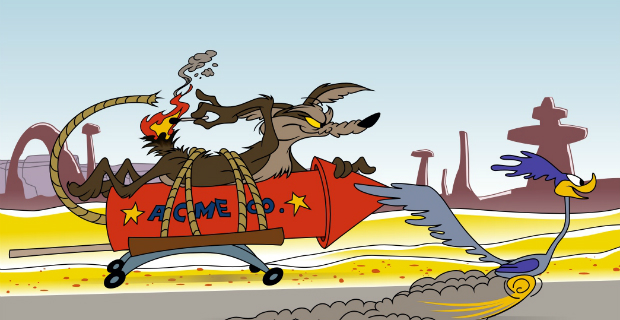 Warner Bros.’ Looney Tunes spinoff film is finally making some progress after spending years in development. According to The Hollywood Reporter, the studio has officially brought on X-Men: First Class scribes Ashley Miller and Zack Stentz to write the script and is working on filling the rest of the team.

The Acme film has been in development since 2010, when Kevin and Dan Hageman (writers of this year’s The Lego Movie) sold the original pitch. It’s likely that the studio decided to give the project an extra push after the wide success of the pair’s Lego film, which has since spurred plans for followup flick. Warner Bros. has even brought many of the same team members from The Lego Movie to lead the upcoming Acme film. Besides the Hagemans, Dan Lin and Roy Lee, the producer duo behind The Lego Movie, are also on board the upcoming project. With their help, it’s clear the studios are hoping the Looney Tunes/Acme movie will become just as big a hit as the Lego film and potentially inspire a new franchise.

But while the movie finally looks to be picking up speed, specific details regarding the project are still being kept under wraps. Per THR, the film has only been described thus far as a hybrid of live action and computer-generated animation.

As for the plot, no detailed information or official synopsis has been released. All that’s known so far is that the film will be based on the Acme Corporation, a fictional company famous for manufacturing complicated products that tend to malfunction when used by various Looney Tunes characters — most often by Wile E. Coyote in his countless attempts to capture the Road Runner. However, the film will reportedly revolve around a new set of characters, not the familiar Looney Tunes gang as we know it.

This wouldn’t be Warner Bros.’ first time pushing a Looney Tunes-themed film. Past similar projects have gotten very different receptions. The 1996 cult favorite Space Jam, starring Michael Jordan, scored big at the box office, opening at No. 1 in the United States and grossing more than $230 million worldwide despite negative reviews. While the studio’s similarly themed 2003 film Looney Tunes: Back in Action, starring Brendan Fraser, received a better critical response than Space Jam, it bombed at the box office, only grossing $20 million domestically against its more than $80 million budget.

Still, with viewers showing renewed interest in family friendly animated adventure comedies like The Lego Movie, the Acme film could perform well, particularly if Carell does officially join the project. The actor has proven successful in participating in kid-friendly flicks in the past. While he’s recently been taking on more dramatic roles, such as in the upcoming drama Foxcatcher, he famously voiced the animated super-villain Gru in both of the massively successful and critically acclaimed Despicable Me movies. He also stars opposite Jennifer Garner in another family comedy, Alexander and the Terrible, Horrible, No Good, Very Bad Day, out October 10.